Mollusks are the latest weapon in the battle to clean up the D.C. waterway once known as the Forgotten River.

Washington, D.C., recently welcomed some new neighbors — about 8,700 of them.

That’s how many mussels just were released into the Anacostia River. And residents will have to get used to them because thousands more are on the way. The adjustment shouldn’t be too taxing since the new arrivals are there to be upstanding community members: They are serving as the latest reinforcements in the decades-long battle for cleaner water in the meandering 8.4-mile river, which cuts through Anacostia Park and flows into the Potomac River.

“The opportunities for water quality, biodiversity and propagating more mussels are huge here,” said Jorge Bogantes Montero, a natural resource specialist at the Anacostia Watershed Society. “This is the first project of its kind locally, but the idea is to set up a model that anyone can replicate.”

Like their bivalve cousins, the oysters, mussels filter excess pollution that comes off the land — either from farm fields, sewage treatment plants or storm runoff. Some urban areas, including New York City, have turned to oysters to filter their waterways and build reefs to boost resilience to storms. But the fresh waters of the Anacostia aren’t suitable for oysters, so Montero and his colleagues are deploying mussels, a bivalve that’s already proven itself as a pollution fighter in places such as Ohio and Kentucky. High concentrations of heavy metals, chemicals and sediment can kill mussels, but if the conditions are right, the mollusks absorb excess nitrogen and phosphorus and settle sediment. The hope is that with the mussels on the job, the Anacostia’s waters will be clearer and aquatic grasses will prosper, creating additional habitat for all manner of creatures. In addition, if all goes well, the new mussels will help revive the population that was already there, increasing their impact. 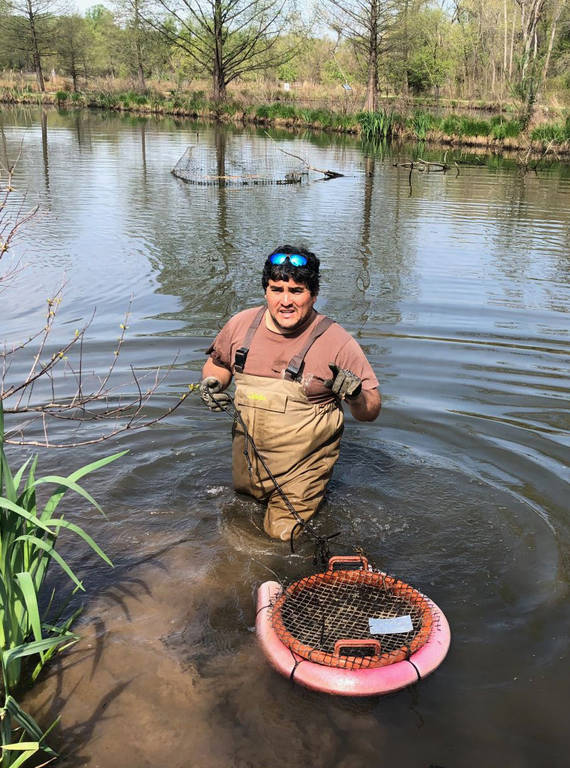 Jorge Bogantes Montero, a natural resource specialist at the Anacostia Watershed Society, and his team placed three species of mussels in baskets in protected sites along the Anacostia River in 2018. With volunteers and partners, they released the mussels this fall.

The notion that any species, let alone a fragile bivalve, could thrive in the Anacostia River would have been far-fetched a century ago, when the Washington Board of Trade called it an “uninviting river” with “miasmatic swamps, whose baneful influence is so seriously felt by a large portion of the citizens of Washington.” It would not have seemed possible in the 1960s, either, when interstate highways were built around and through the 1,200-acre riverfront Anacostia Park, and industry polluted the river’s shores. It hardly appeared likely through the early 2000s, when Washington’s government battled with the Environmental Protection Agency about how to pursue a multibillion-dollar tunnel to keep stormwater and sewage out of the river, which eventually flows into the Chesapeake Bay, the largest estuary in the U.S.

But recently, the tide began to turn for the tributary once known as the Forgotten River and the national park site that flanks it. Anacostia Park, a vital green space for the mostly African American residents of nearby neighborhoods, includes Kenilworth Park and Aquatic Gardens, the 3.5-mile Anacostia Riverwalk Trail, a popular swimming pool, and the only roller- skating rink in the National Park System.

The $2.6 billion stormwater tunnel project finished nearly two years ago. Shortly after it did, the Anacostia River received its first passing grade on the Anacostia Watershed Society’s annual report card. It was a D, but it was better than failure. Several communities along the river instituted rules banning plastic bags, which also helped reduce trash.

Montero reasoned that the river was in good enough shape to support the mussels he’d been working with the U.S. Fish and Wildlife Service to grow in a Virginia hatchery. In 2018, Montero and his team placed three species of mussels in baskets in protected sites along the Anacostia River at Kenilworth Park, Kingman Island and Heritage Island, among other locations.

The team watched the mussels, hoping they would adjust to their new settings and survive record rains, which washed additional sediment and pollutants into the river. Most did. After a year, mortality was only 8%.

This fall, when the mussels were ready to come out of their baskets, Montero, volunteers and partners from agencies including the National Park Service canoed into the river by Kenilworth Park and Kingman Island and released them. The hope, said Anacostia Watershed Society President Jim Foster, is to do “a million more.” The reality, Montero said, is 35,000 more over the next two years, thanks to a $400,000 grant from Washington’s Department of Energy and Environment.

A cleaner waterway benefits nearby neighborhoods, wildlife and the public lands along the river. Aerospace engineer Ben Bowman discovered Kingman Island, which was built from dredge material pulled from the Anacostia in 1916, six months after moving to a neighborhood by the river. There, he’s seen ospreys, flourishing underwater grasses and kingfishers.

The number of people visiting Anacostia Park has risen in recent years and park-goers have noticed the improvement of the river, said Tara Morrison, the park’s superintendent, who also oversees several other sites in the vicinity.

“We have an exciting opportunity, as the river gets cleaner, to be able to promote fishing and swimming — people are looking forward to that, and we believe it’s possible,” she said. “It’s what we’re working toward.”