More than a century ago, conservationists set out to protect a large swath of land to save a fast-disappearing herd of Roosevelt elk — and nearly named a national park after them.

At the 1893 World’s Columbian Exposition in Chicago, Clinton Hart Merriam, the chief of mammalogy for the U.S. Department of Agriculture, was contemplating a display of severed Olympic elk heads with Theodore Roosevelt, then a commissioner for a government agency.

Roosevelt, a skilled hunter who a few years earlier had founded the Boone and Crockett Club to promote the conservation of game animals, remarked on the differences between the features of Olympic elk and those of plains elk. Roosevelt’s acute knowledge of the elk’s features stuck with Merriam. Four years later, he recalled this conversation when he identified the Olympic elk as a distinct species. (It is now considered a subspecies of the North American elk.) 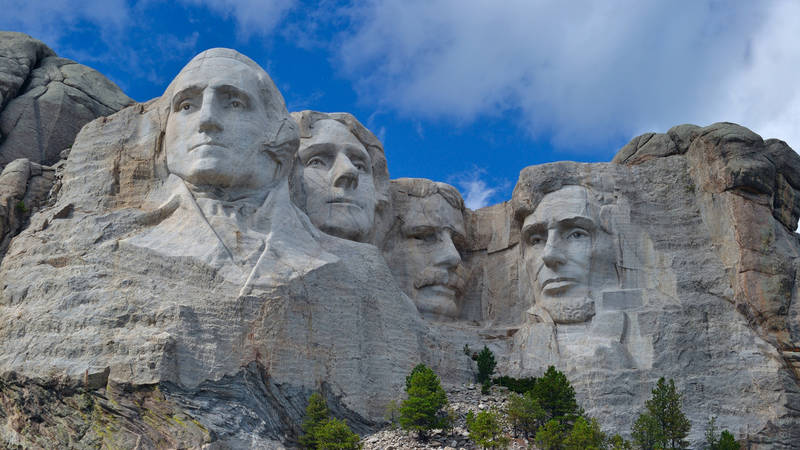 A Woman on Mount Rushmore?

Mount Rushmore National Memorial features the faces of four U.S. presidents. All, of course, are men, but Congress considered a bill in 1936 supporting the addition of a female figure…

“I deem it a privilege to name this splendid animal Roosevelt’s wapiti,” Merriam wrote. “It is fitting that the noblest deer of America should perpetuate the name of one who, in the midst of a busy public career, has found time to study our larger mammals in their native haunts and has written the best accounts we have ever had of their habits and chase.”

Roosevelt, who by then was serving as assistant secretary of the Navy, responded in a letter: “I deeply appreciate the compliment, and I am only sorry that it will never be in my power to do anything except to just merely appreciate it!” This was not Roosevelt at his visionary best, as a little more than a decade later he would do more than anybody else for the protection of the elk with the stroke of his pen.

Roosevelt elk have long roamed the forests of the Pacific Northwest, and in the 19th century, the Olympic Peninsula was home to the elk’s largest herd. But in the 1890s, hunters started killing the animals in large numbers. One settler bragged of killing 70 in a single day at Swan Bay, in what is now the park’s western section. One reason for the slaughter was the elk’s incisors, which were popular ornaments for watch chains at the time. Nobody knows how big the original Olympic herd was, but by the beginning of the 20th century, there were no more than 500 elk left in the area.

“These animals have apparently been shot down for the mere love of killing, and in a great many instances not a pound of meat has been taken; nothing in fact except the horns and teeth; the carcasses have been left to rot,” read an editorial in the Seattle Mail and Herald. “This, of itself, is a shame on humanity.”

After exploring the peninsula in 1890, Lt. Joseph O’Neil was the first to propose that the interior would “serve admirably as a national park. There are numerous elk … that should be protected,” he wrote in his report on his expedition. With the precipitous decline in the elk population, efforts to protect the animals intensified, and in January 1904, Rep. Francis W. Cushman of Tacoma introduced a bill to set apart a portion of the peninsula as a “public park, to be known as ‘The Elk National Park,’ for the purpose of preserving the elk, game, fish, birds, animals, timber, and curiosities therein.”

The bill garnered large support but didn’t become law, in part because Rep. William E. Humphrey of Seattle introduced a conflicting bill that — unlike Cushman’s — didn’t protect the area’s timber from logging. With no action on the federal front and continuing hunting of the elk, Washington’s state legislature decided in 1905 to make it illegal to kill elk in Washington state for 10 years. (Other efforts to boost elk numbers included aggressive campaigns against mountain lions and wolves, which eventually led to the eradication of the wolves from the peninsula in the 1920s.)

Meanwhile, in 1906 Congress passed the Antiquities Act, which Roosevelt, who was serving his second term as U.S. president, signed into law. Humphrey kept pushing for the creation of a game reserve, and on March 2, 1909, only two days before the end of Roosevelt’s presidency, he secured a meeting with the president and Gifford Pinchot, the head of the U.S. Forest Service.

“Without waiting for any formal greeting, as soon as [Roosevelt] entered, he called to me across the room, ’Tell me what you want, Mr. Humphrey, and I will give it to you.’” Humphrey later recalled. The congressman responded: “Mr. President, I want you to set aside as a national monument, 750,000 acres in the heart of the Olympic Mountains; the main purpose of this is to preserve the elk in the Olympics.” Roosevelt replied: “I will do it. Prepare your order, and I will sign it.”

Roosevelt’s proclamation of Mount Olympus National Monument referred — perhaps out of modesty — to the protection of the “Olympic Elk” as a rationale for the monument (it did include the animal’s Latin name, Cervus roosevelti), but it ambiguously left open the possibility of logging in the park. Indeed, pressure to log the area’s timber continued even after President Franklin D. Roosevelt (Teddy’s distant cousin) redesignated Mount Olympus National Monument as Olympic National Park in 1938. During World War II, calls mounted to log Olympic old-growth forests to support the war effort. Thankfully, conservation advocates, including NPCA, succeeded in keeping the chainsaws at bay.

The park Roosevelt created for his namesake elk — the largest subspecies of the North American elk — has played no small part in the animal’s recovery. More than 90,000 of them live in the U.S. and Canada, and thousands roam the park and neighboring areas.