The icy, steep Chilkoot Trail runs for 33 miles from the Alaskan coast to the Yukon interior. For centuries, indigenous Chilkoot and Chilkat Tlingit traders controlled the harrowing pass, one of only three overland routes into the interior. Then the Klondike Gold Rush overwhelmed this landscape. In 1897 and 1898, 20,000 prospectors scaled the trail with their supplies to reach the Yukon goldfields.

After a railway was built and the gold dwindled, these seekers left the Chilkoot Trail as quickly as they came. They deserted their tent cities and abandoned what they didn’t want to carry, from large pieces of tramway equipment to clothes and tools. Today, these ghostly remnants along the trail fascinate the 3,000 backpackers per year who scale the pass in Klondike Gold Rush National Historical Park.

“We call it an outdoor museum,” said Caitlin Rankin, a Washington University archaeology graduate student who has scrutinized these artifacts. “You’re walking through the footsteps of time.”

Climate change is creating a paradox for archaeologists working on the Chilkoot Trail. As high-altitude patches of ice melt, intriguing objects frozen inside them can emerge and reveal new details about the trail’s long history. At the same time, warming temperatures are threatening to destroy these and other artifacts across the park. Once organic materials such as fragile leather and wood thaw, they start to decay, said Dael Devenport, an archaeologist in the National Park Service’s Alaska Regional Office. “If they are not found immediately, we will lose them.”

Park staff are even more concerned about artifacts at ice-free locations along the trail. As melting glaciers send more water and sediment into rivers and lakes, some historical sites are at risk of serious flooding. Researchers are urgently trying to find and document cultural items before they disappear. 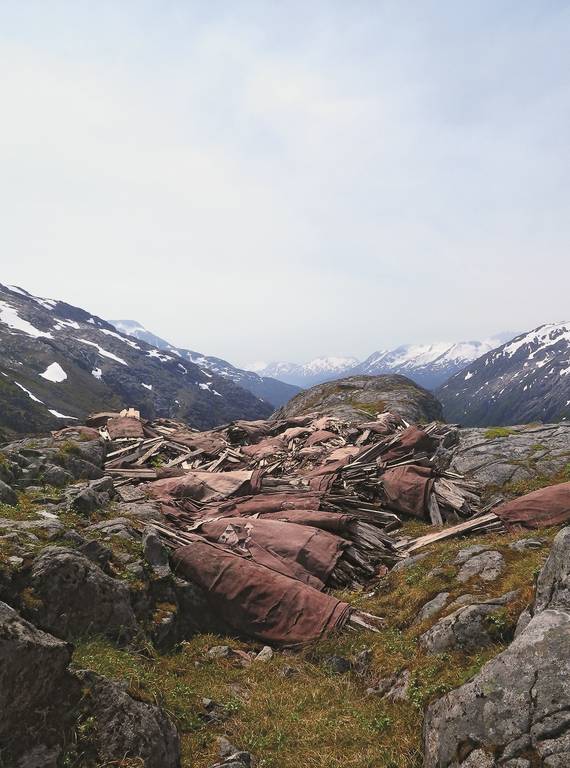 Abandoned “knock-down boats” near the highest point of the Chilkoot Trail.

Ice patches are areas that remain frozen year-round. But when temperatures are too warm, patches soften and their edges recede. Since 2001, archaeologists surveying melting ice patches in other Alaskan national parks have found incredibly well-preserved ancient objects. At Wrangell-St. Elias National Park and Preserve, for example, antler projectile points, wooden dart shafts, cut hide and even part of a 650-year-old birch bark basket have emerged. The items are largely hunting and camping gear because the patches were key summertime hunting spots, as caribou and sheep were drawn to the cool grounds. “These objects are the rarest of the rare,” said Andrew Tremayne, a former Park Service archaeologist.

Researchers began to officially survey a few of Klondike Gold Rush National Historical Park’s 277 ice patches in 2016, after observing them by helicopter for years. Since archaeologists have uncovered very few pre-gold rush sites along the trail, they hoped to find ancient materials in the patches. The research was part of a larger project to evaluate cultural resources across the park that could be damaged or destroyed as the climate changes. The project, which is now completed, is helping staff prioritize which sites to monitor and study further.

The research team, comprising the park’s former archaeologist Shawn Jones, Rankin and others, hiked the trail repeatedly to acquire data. “The scariest part is called the Golden Staircase, right near the summit,” said Rankin. “You’re climbing big rocks. It’s almost always raining and misty, and you can’t really see.” At the top, the U.S. and Canada borders meet near a site called Chilkoot Pass. Here, at about 3,500 feet, the team paused to check the condition of artifacts that usually melt out of the snow in summer but have been staying wet and warm for longer intervals due to rising temperatures.

Among the artifacts at the summit are more than 50 bundles of wood wrapped with canvas. These are “knock-down boats” likely brought by a company to sell to prospectors to assemble and float down the Yukon River to the goldfields near Dawson City. Researchers aren’t certain why the company abandoned the materials. To help with preservation, staff have sent some of the bundles and other artifacts to museums, but it is easier and cheaper to leave items in place and monitor them. (Also, if the boats are placed in storage, they are no longer accessible to the public.)

In 12 ice patches close to the summit, the team discovered a number of items related to the gold rush period, such as a leather pouch, a grapefruit juice can and a pile of bones from an ox. In addition, near one ice patch, lodged in a crack on a rock ledge, they spotted a wooden tool with one pointed end and one splintered end. Radiocarbon dating suggests it is around 140 years old — from the decades before the Klondike Gold Rush. Researchers have speculated that this stick is an ice probe for navigating the trail, but they can’t confidently identify who used it. Perhaps a Native trader or packer owned it, or a miner could have made it using older wood. Despite the uncertainty, the find is tantalizing. “What else is up there that we don’t know about that could be preserved in the ice?” Tremayne asked.

The team also checked large gold-rush sites such as Sheep Camp, which in 1898 was a mile-long stretch of tents and 50 businesses. Sheep Camp was on the opposite side of the river from the trail and only accessible by log bridges. The bridges are long gone, and so the isolated site has been little studied. Today investigators must use a zip line to get there. Sheep Camp’s remains are threatened by increased glacial melt, which is making the already flood-prone area even more unstable. “The entire site will be washed away by migrating rivers,” Rankin said. “We are very certain that this will happen, and it’s a problem because the site hasn’t been fully inventoried.”

Despite the need to act quickly, the park is currently without a full-time archaeologist, and staff are unsure when they will have the funding to document Sheep Camp thoroughly or survey new ice patches. Some researchers say that the current administration is neglecting federal climate-related archaeology projects in national park sites and that to get support for proposals, they have omitted or edited references to climate change.

It’s upsetting, Tremayne said. “But we do what we can.”

The Last Wild One