For as long as I can remember, I have struggled with fitting my identity into the complex puzzle of race and ethnicity in this country. My mother is from Japan, and I was also born there, though my family moved to the U.S. when I was a baby. In Seattle, where we lived, my white father worked at Boeing, and my mother stayed home to raise my brother, sister and me. Because of her, Japanese culture subsumed our household. We flew carp windsocks on Boy’s Day and Girl’s Day. We danced at the Obon festival, which lights the way home for our ancestors. We sometimes ate fish for breakfast. I knew and saw and tasted things that Americans twice my half-Japaneseness seldom experienced.

I felt Japanese, so very Japanese, but not necessarily Japanese American. My mother had been in Japan during the war, so in contrast to other families like ours, we didn’t have a direct connection to the World War II mass incarceration of Japanese Americans. Our distance from those forced removals imbued in me a certain detachment, not just from the event, but from the community that endured it. It felt like a cultural litmus test that I could never pass.

The author (at right, in the striped shirt) at home in Seattle with his mother and siblings.

Like many Americans who are even aware of Japanese incarceration, for much of my life, I was brainwashed into thinking of the shameful episode as some kind of benign act. I pictured an acquiescent people reporting passively to their own imprisonment. This is the way it had been portrayed in U.S. history books, and a culture of silent endurance — very familiar to me — stopped camp survivors from contradicting that whitewashed version.

In 2017, 75 years after Franklin Roosevelt signed Executive Order 9066 to authorize the forced removals, I decided to try resolving my sense of dissonance and incomprehension. I rummaged through the remnants of confinement at once-desolate landscapes to learn about this grim and underrepresented period of American history. I sought out otherwise ordinary people who had suffered in extraordinary ways at the hands of their own government. And I listened to stories about the dignity with which survivors had endured these indignities.

My yearlong journey visiting incarceration camps began at Minidoka National Historic Site in Idaho. Japanese Americans have been making annual pilgrimages there since 2003, and it seemed like a logical place to go first since it was the place where most Seattleites were taken.

When I arrived, I found myself among more people of Japanese descent than I’d ever seen outside of Japan. It was disconcerting. Though I shared a hometown and some cultural reference points with many other attendees, I recognized few of them. I felt as if I were attending someone else’s class reunion.

Their common connection to the place didn’t feel familiar to me either, but I took a deep breath and joined a tour of Minidoka’s crude barracks, falling in next to several Japanese Americans who had once stayed in them. I hadn’t realized how thin the tarpaper-covered walls were, how many families were crammed into each structure, or how muddy, dusty and snowy the remote desert was. It’s difficult to understand the unsettling nature of a guard tower until you are peering up at one.

I also hadn’t fully appreciated before my visit how the U.S. government had used its captives to help push the West into agriculture. In one of the great, untold stories of our country’s environmental history, imprisoned workers converted huge swaths of barren landscape into arable real estate. The acres surrounding Minidoka are now lush and productive, though none of the Japanese Americans who made that possible ever profited from the transformation.

One of the things the camp survivors mention most frequently is having to go to the bathroom in front of each other in crowded, open latrines. For such a modest people, it must have been horrifying in a way that non-Japanese folks cannot imagine. I could relate, of course, which said something about me that I was just beginning to understand.

As we continued our tour, I thought about a story told to me by Clarence Moriwaki, a third-generation Japanese American who spearheaded the creation of the Bainbridge Island Japanese American Exclusion Memorial in Washington. Near the end of his life, Nobuo Moriwaki, Clarence’s father, broke his long silence about his World War II experiences. The elder Moriwaki lived far enough inland to have been spared the camps, but later was drafted into military intelligence. He once took a leave to visit his ailing uncle in Minidoka. Along the way, he stepped off his bus to stretch his legs. Although dressed in U.S. Army khakis, he was spotted by police, arrested and tossed in jail for looking like the enemy. By the time he finally caught the next bus to Minidoka, he was in danger of being AWOL.

The uncle had gone every day to the front, barbed wired fence at Minidoka to wait for his nephew. And when Nobuo Moriwaki finally did arrive, he barely stayed. The uncle lashed out: “You good-for-nothing, you go away.” Weeks later, the young man received a letter informing him of his uncle’s death. The letter was postmarked the day after he’d left Minidoka.

“My father kept that inside for 60 years. He was living gaman to the hilt,” Clarence Moriwaki said, referring to the Japanese notion of enduring and shielding the next generation from the negatives of the past. 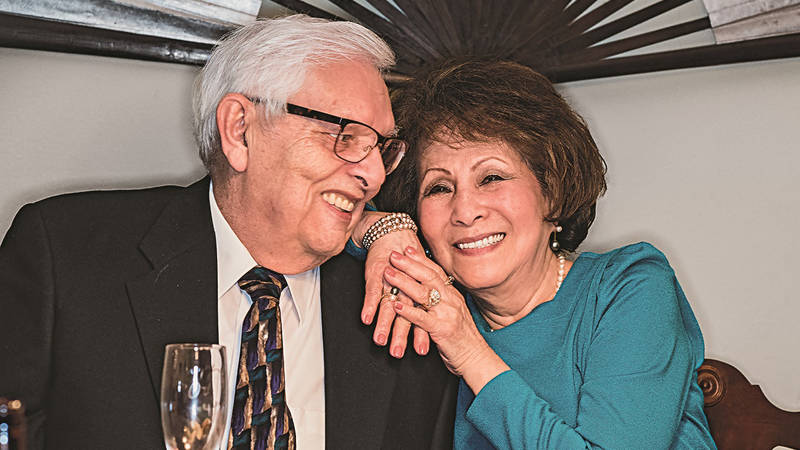 The author’s parents, Scott and Chiyoko Nelson, celebrating their 60th wedding anniversary in 2016.

Clarence Moriwaki, I realized at Minidoka, had received the fruits of gaman. For him, the dark secrets, when finally unleashed, flowered into something wonderfully meaningful — a deeper understanding of his family’s past and his relationship to it. I was in the process of receiving a similar gift.

My self-discovery continued at an educational session in a big auditorium full of other mixed-race Japanese participants. Mia Russell, the director of the affinity group Friends of Minidoka, was among those who urged me to embrace my stake in the history of Japanese incarceration. “It’s part of being American,” she said. Russell grew up in Boise, but she didn’t learn of the prison camp only two hours down Interstate 84 until she went to college in Southern California. If she could believe in her connection, I thought, I certainly could.

Later that day, I attended an “intergenerational session.” After dividing into groups composed of young, middle-aged and older participants and at least one Minidoka survivor, we were instructed to share our experiences around the incarceration. As people went around the circle, no one held back, and their narratives about the humiliation and anger they still felt about the incarceration or the disappearance of community and history gave release to torrents of tears.

At first, I thought about passing out of respect. I feared my past didn’t reside on the same emotional plane. But the weekend had taught me that I had a place there, too. Sobbing quietly with the rest of them, I realized that it was the horror and heartbreak of war, and the love and heroism required to overcome that horror, that aligned all of us, including me.

Also, you cannot listen to the most intimate details of people’s lives and offer nothing in return. Some of those details had been repressed for 75 years, after all. So I told the group a story about a white guy from a part of Washington state known for its wheat who fell in love with a young beauty from a part of Japan renowned for its rice. My father had written to his mother about his engagement to this Japanese woman. Instead of writing back, she telegraphed my father’s commanding officer. My father was relocated to a place called Sado Island and ordered to “think things over.” I later learned that Sado Island is so isolated that throughout Japanese history it is where the vanquished were exiled. He was there for seven months, but in the end, love prevailed.

When I finished my story, the survivor in our group looked up, touched my hand, and softly said, “You are like the rest of us.”