Every morning of the Minnesota summer, Tom Gable wakes up with the wolves. That is to say, he wakes up with the next best thing for a wolf researcher: a complete dataset of the recent GPS locations of half a dozen radio-collard wolves roaming through the vast, watery wilderness of Voyageurs National Park.

Gable, a 27-year-old Ph.D. student from Michigan, is trying to answer an elusive question: What exactly do these wolves eat in the summer? The carcasses of deer and moose that wolves kill in the winter are relatively easy to spot in the snow, even from the air. In summer, though, northern Minnesota’s dense, jungle-like forests keep the wolves — and their eating habits — in the dark.

But thanks to the GPS collars and hundreds of hours of bushwhacking, Gable is making some startling discoveries about the summer diet of these wolves. He’s finding that they kill a lot of beavers. At least one pack goes fishing. And in one study, Gable found wolves that spent five weeks subsisting on blueberries. 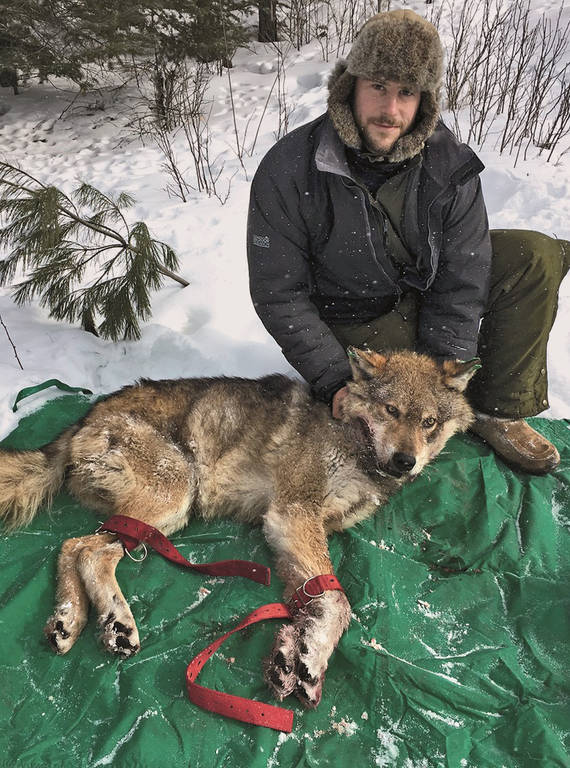 Each year, Tom Gable (pictured here) and his team equip a handful of wolves with GPS collars so they can track the animals’ movements and gather information about their diet. This wolf’s collar recorded more than 12,000 locations between February and October 2018.

“Wolves eat whatever’s around,” said Dave Mech, a worldwide wolf authority and a member of Gable’s Ph.D. committee at the University of Minnesota. “We’re used to thinking of wolves preying on moose or deer, but whatever’s available in good supply and is easy to get, wolves will take.”

Minnesota is home to almost half of all gray wolves in the lower 48, and Voyageurs has one of the densest wolf concentrations in North America. Up to seven packs spend time in the park. It’s a prime place to study wolves.

Gable’s fieldwork begins here each spring when he and his team trap a handful of wolves, anesthetize them using a syringe attached to a broomstick and fit them with collars that transmit the wolves’ locations every 20 minutes. This information is bounced off a satellite and onto a computer in Gable’s Park Service cabin. And that’s where Gable’s mornings begin: with a cup full of coffee and a screen full of coordinates.

Gable wrote some computer code that enables him to pinpoint every location where a wolf has remained relatively stationary for 20 minutes or longer. These are places where the wolf may have made a kill. Gable emails these coordinates to his field crew. Then he takes six to 10 for himself, hops in his car or a Park Service boat, motors to a convenient starting point, and walks into the woods.

On any given day from April to October, Gable and his team members may spend 10 solitary hours in these woods, hiking up to 14 miles, wading through black spruce bogs, clawing through thick walls of hazel and alder, slapping at biting flies, and wiping sweat from their eyes.

“We have to go everywhere the wolves go,” Gable said.

Remarkably, Gable and his crew almost never see the wolves, even though the GPS data sometimes shows that they were within a hundred meters of them. When Gable reaches a location, he approaches it like a crime scene. He scans the vegetation for any signs of disturbance. Then he gets down on his hands and knees and combs the undergrowth for evidence of a kill.

Most often, the site is just the spot where a wolf bedded down. But if Gable finds any hair, bone fragments or blood, he can almost always determine what the wolf killed and how. Gable and his team spend almost every day in the woods until the end of October, when the collars are programmed to fall off the wolves. Last year the team visited 4,900 locations in and around the park, about 3% of which were kill sites.

Usually the kills are deer fawns or beavers. Sometimes it’s a snowshoe hare or a raccoon. But Gable has also set up remote cameras that documented wolves “fishing” for spawning white suckers. (Coastal wolves are known to eat salmon, but this is the first footage of wolves eating freshwater fish.) And during the fall bear-hunting season, Gable learned that Voyageurs’ wolves eat gut piles left out by hunters near the park’s boundaries.

But the wolves aren’t always carnivorous. From mid-July to mid-August, many of the animals’ GPS locations are in dense blueberry patches. In a weekly study of wolf scat in 2015, Gable found that blueberries made up 83% of a pack’s diet in late July. It’s hard to imagine a carnivore sustaining itself on fruit, but the berries ripen when fawns are faster and harder to hunt, and they may help wolves endure lean times. Bear bait piles, which include almonds, peanuts, seeds and candy, accounted for a fifth of the wolves’ diet at the end of August and may serve a similar purpose.

Beavers are another food source intriguing wolf biologists. Until now, no one knew how wolves hunted beavers. Wolves usually chase their prey, but that’s an ineffective strategy for beavers, which are strong swimmers and never far from water. Gable has discovered that wolves switch hunting strategies when preying on beavers: They lie in wait and ambush beavers where they are vulnerable, on feeding trails near their lodges. This suggests that wolves have the higher cognitive abilities of foresight and planning and that wolves are even more adaptable than biologists thought.

Gable’s work is part of the Voyageurs Wolf Project, a partnership between the University of Minnesota and the National Park Service. Since the project began in 2012, Gable and others have researched pack size, reproduction rates, den location and territory.

“People have been studying the ecology of wolves in Minnesota going back to the 1930s,” said Voyageurs wildlife biologist Steve Windels, who oversees the Park Service part of the project. “But the more you study wolves, the more you realize what it is you still don’t know.”

Gable has already followed wolves to all corners of the park. He rarely takes a day off. Last summer, he trekked 800 miles, a distance matched almost exactly by individual collared wolves. Along the way he’s identified the country’s largest-known jack pine tree and set foot in places few people ever see. He’s also cultivated a certain respect for the wolves he’s studying.

“It’s hard not to develop an appreciation for an animal going about a wild place, making a living, day after day,” Gable said.

This article appeared in the Summer 2019 issue