A team of students traveled to Stones River National Battlefield in Tennessee to learn camera-trapping — taking pictures of animals in the wild. See photos from their award-winning project.

A curious wild turkey investigates a camera trap set by a group of middle school students.

One hundred fifty-six years, one month and 11 days after the Battle of Stones River ended, 21 students from Nashville’s Oliver Middle School arrived in Murfreesboro, Tennessee, at the national battlefield that commemorates this important Civil War conflict.

National Park Service Ranger and Education Coordinator John McKay explained the significance of the battle to the students, including President Lincoln’s signing of the Emancipation Proclamation on the same day the Union Army won the battle — but the students were there for more than a history lesson.

An aerial view of the Stones River National Battlefield in Tennessee.

The ecological value of battlefields is often underrated, and many of these historic sites provide hundreds of acres of intact habitat. These landscapes are carefully preserved to offer an accurate account of conditions at the time, and as a result, they also preserve important biological resources.

The students were the first of three Nashville school groups to deploy wildlife cameras, also known as camera traps, amid this great diversity of flora and fauna in the park, as part of a citizen science project aimed at photo-documenting various critters that call the battlefield home.

The students captured this image of a coyote from one of their camera traps.

I led the program with a big assist from my colleague Ryan Valdez, NPCA’s director of conservation science and policy, as well as McKay and his colleagues Ranger Ava Joiner and Natural Resource Technician Sam Mabery, who worked alongside us in the field. Together, we taught the students about the technology and set cameras at locations approved by our Park Service partners.

The students split into several teams, equipped with backpacks of camera traps, GPS units and data sheets, and took to the outdoor experience as any field researchers would. Working together, they carefully selected each host tree to attach a camera to and went through their checklist of items for installation.

One of the camera traps captured a one-antlered deer exploring the forest.

Then, the students left the weatherproof cameras active in the field. A second school group from Antioch Middle School retrieved them 22 days later and set up new camera traps. A third troup from JFK Middle School rounded out the program by retrieving the second group of cameras and setting up the last set of cameras. 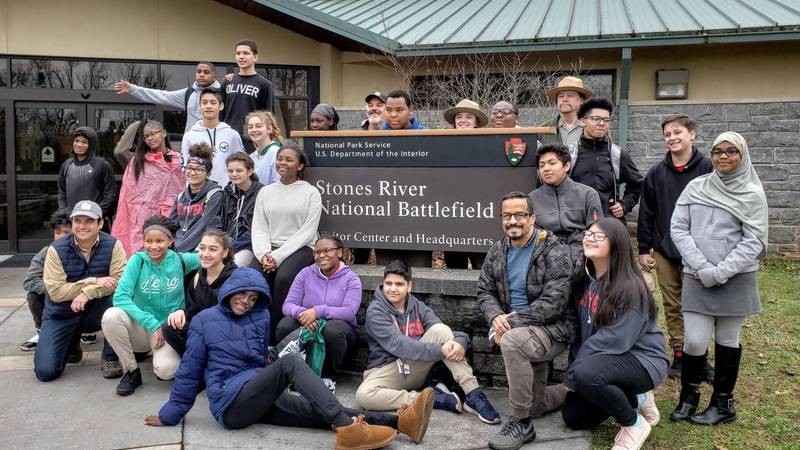 The results were impressive. The students captured thousands of images of wildlife, including white-tailed deer, coyotes, red foxes and a variety of birds such as wild turkeys and eastern bluebirds. The students’ teacher, Carlos Calderon, and GIS consultant Vicki Franklin helped them take the project a step further and integrate the geospatial sciences — the science of mapping. Students learned how to overlay camera locations onto the park’s habitat maps, producing a dynamic “storymap” that conveys the results of wildlife captured on cameras through an online interactive platform.

The students entered their online map in a STEAM (Science, Technology, Engineering, Arts & Math) Expo held on May 8 at Tennessee State University and brought home a gold medal for their efforts!