Mammoth Cave National Park may boast the world’s longest cave system, but one national park site includes hundreds more caves within its boundaries. Learn about the site with the most known caves in the National Park System.

National park visitors are attracted to the parks’ spectacular landscapes and expansive skies overhead, but the National Park System also includes many underground wonders — more than 4,700 of them. That’s the number of known national park caves, and it’s constantly increasing. “The more time we have to explore, the more we find out,” said Jeffrey Olson, the head of the National Park Service’s Natural Resource Stewardship and Science Office of Education and Outreach. 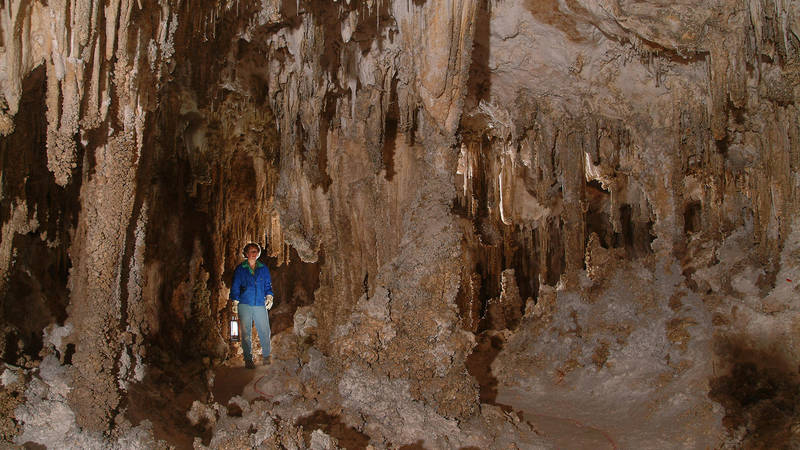 Go below the Earth’s surface to explore exquisite realms that evolved in total darkness. These 10 national park caves are places to learn about the mysterious worlds under our feet.

Mammoth Cave National Park in Kentucky, with more than 400 miles of documented chambers and passageways, is by far the park system’s — and the world’s — longest known cave system, but the national park site with the largest number of caves is a much lesser-known speleological hotbed: Lava Beds National Monument. Katrina Smith, the park’s acting chief of natural resources, said the Northern California park includes more than 800 caves. Olson said Kenai Fjords National Park in Alaska comes in second with 488 caves, and Ozark National Scenic River in Missouri rounds up the top three with 420 caves.

Until 2006, only about 400 caves had been documented at Lava Beds, but a major effort to inventory new caves added hundreds more over a couple of years, Smith said. Park staff collaborate with spelunkers and researchers from the Cave Research Foundation and the National Speleological Society, and new caves are added every year, she added.

The Federal Cave Protection Act of 1988 defines a cave as “any naturally occurring void, cavity, recess, or system of interconnected passages which occurs beneath the surface of the earth or within a cliff or ledge … and which is large enough to permit an individual to enter,” but for counting purposes, Lava Beds staff only include caves that are at least 40 feet long. Smith said including smaller caves would add hundreds to her list.

Lava Beds National Monument was established in 1925 by President Calvin Coolidge. The park preserves lava flows, cinder cones and other volcanic formations created by eruptions of the Medicine Lake volcano over the past 500,000 years. The eruptions also formed the largest concentration of lava tubes in the contiguous United States.

The entrance to Valentine Cave at Lava Beds National Monument.

When lava flows like a slow-moving river, the air cools the top surface, which starts hardening, forming a crust. At the same time, the flowing hot lava erodes the ground floor. The lava flow eventually exits the cavity and leaves behind a lava tube. All caves at Lava Beds are lava tubes that were formed between 65,000 and 10,500 years ago.

Most of the park’s caves are located in the backcountry, and staff do not publicize their locations to protect them from possible damage. Still, about two dozen caves have been developed for the benefit of visitors. The park offers guided tours, but these caves can be explored independently, although preferably not alone, for safety reasons. Some, such as Mushpot Cave, are easy to access (located near the visitor center, Mushpot is the only cave in the park to include lighting and exhibits), while others involve a substantial amount of crawling.

The park loans some flashlights and sells protective hats known as bump hats, but staff strongly recommend that visitors bring their own flashlights and head gear (a bike helmet works fine) to avoid injuries (“Headache Rock” at the entrance of Golden Dome is so named for a reason) as well as warm clothing and long pants to ward off the cold and scrapes. Cave maps, which can be purchased at the visitor center, are also recommended, especially for complex caves such as Labyrinth Cave and Catacombs Cave, the park’s longest at more than 8,000 feet and counting. “The visitor center is key to exploring,” Smith said.

Park staff also screen visitors for white-nose syndrome risk and ask cave explorers who’ve visited other caves and mines to use different boots and gear so as to not propagate this fungal disease, which has devastated bat colonies across the country. Every winter, the park closes several caves that are home to hibernating Townsend’s big-eared bats. Some are also closed in the summer to protect the bats’ offspring. “The moms could leave their pups behind if they feel disturbed,” Smith said.

Still, the temporary closures leave lots of opportunities for cave enthusiasts, and the rewards are plenty. Lava Beds’ caves include a year-round ice floor (Skull Cave), Native American pictographs (Big Painted Cave and Symbol Bridge), and 14 species of bats. “If people have a keen eye, they can observe one or two bats during their visit,” Smith said.

Another attraction is the bacterial mats that adorn many of the caves’ ceilings. Various phyla of bacteria combine to create gold, silver or tan coatings. Because the bacteria are hydrophobic, they push out water, and the droplets sparkle in the light of visitors’ headlamps or flashlights. Smith said Golden Dome’s shimmering mats make it her favorite cave. “It’s got those beautiful bacterial mats on the ceiling,” she said. “It’s really spectacular.”