Go below the Earth’s surface to explore exquisite realms that evolved in total darkness. These 10 national park caves are places to learn about the mysterious worlds under our feet.

Stephen Bishop was an enslaved African American who served as one of Mammoth Cave’s first tour guides. Charismatic and adventurous, Bishop was brought to the cave at age 17 and soon became one of its most accomplished explorers. He greatly expanded understanding of the site, found and named many popular formations, created the first map of the cave, and led visitors on tours, sometimes for 14 hours at a time.

This complex labyrinth in the Green River Valley of central Kentucky is by far the largest known cave system in the world. Explorers have mapped more than 400 miles of passageways to date and have yet to find an end to it. The site’s many paths, shafts, chasms and chambers feature just about every kind of cave formation, from stalactites and stalagmites to gypsum deposits shaped like flowers. This site also features one of the richest known habitats for cave wildlife in the world, with 130 different species, 14 of which can’t be found anywhere else. Visitors can explore the caves on a number of guided tours, ranging from short, accessible walks to six-hour strenuous adventures (advanced reservations are strongly recommended); free above-ground birding hikes and other ranger-led nature programs are also available.

This popular site is made up of more than 119 individual caves, including some of the largest, longest and deepest in the world. The caves are unusual in how they formed — not just by water flowing down through cracks in the rock, but also through gas rising up from petroleum deposits deep in the Earth and mixing with rainwater to form sulfuric acid. This acid eroded the rock more aggressively than water alone, likely contributing to the sheer size of these caves. Three of the site’s caves are open to the public, the most famous of which is Carlsbad Cavern, where visitors can take ranger-led or self-guided tours of the Big Room, the largest single cave chamber in North America. Visitors can take a scenic route to the cave via a trail from the natural entrance leading 750 feet down into the chamber. In addition to Carlsbad Cavern, rangers also offer tours of Slaughter Canyon Cave and Spider Cave, which are less developed and offer a wilder experience.

Wind Cave, a sacred site in many Indigenous cultures, is named for the pronounced gusts of wind that blow in and out of its natural entrance and change direction based on atmospheric pressure. In 1903, this site became the first cave in the world to be preserved as a national park. Its interior is relatively dry and has few of the stalactites and stalagmites that are typical in other caves, and it is one of the best places in the world to see a rare mineral formation known as boxwork, patterns of calcite blades formed into irregular honeycomb shapes. The cave features other interesting formations, including gleaming calcite crystals known as dogtooth spar, needle-shaped growths called frostwork and the nubby bumps appropriately named cave popcorn. 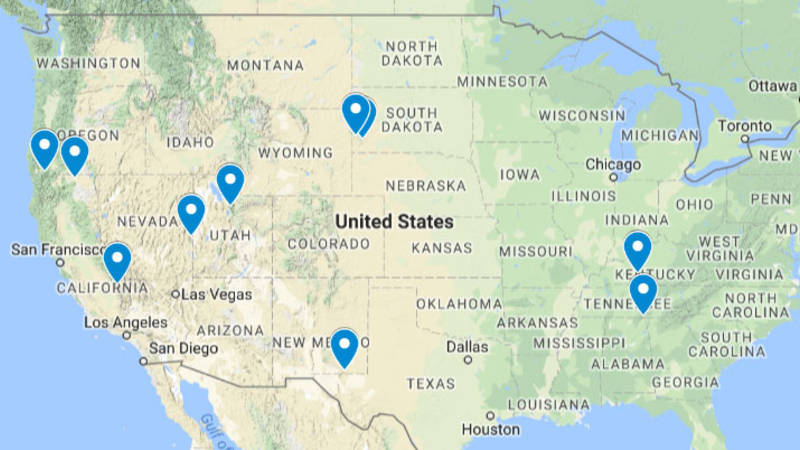 See a Google map with all of the featured caves in this story.

Most of the underground passageways we think of as caves are formed out of karst, a porous type of rock. This site in northern California, however, features the greatest concentration of lava tubes in North America, the result of the nearby Medicine Lake Volcano erupting periodically over the course of thousands of years. Of the more than 700 lava tubes at the park, 25 have marked entrances and trails for self-guided exploring (although three are currently closed to protect significant bat hibernation sites from white-nose syndrome). These tubes offer varying levels of difficulty for a range of hiking options, but only one is lighted, so all visitors are advised to bring a flashlight and head gear (and must check in at the visitor center before exploring). Guided ranger tours are also available for two of the caves that are otherwise off-limits to the public — a strenuous three-hour tour of the Crystal Ice Caves available during the winter showcasing the cave’s exquisite ice formations, and a more moderate one-hour tour of Fern Cave available during the summer to see the cave’s pictographs, petroglyphs and unusually lush plant life.

This park, tucked along a winding road in the Siskiyou Mountains of southwest Oregon, offers an unusual cave experience. Its limestone walls changed through years of heat and pressure into smooth, white marble, and groundwater seeping through cracks in the marble formed these rare caves — a process that took at least a million years. The site is now commonly referred to as the “marble halls of Oregon.” Underground is a flowing river, more than 50 paleontological sites with a host of fossils and petrified rock gardens, and numerous caverns to explore. Short but fairly strenuous tours showcase the cave’s uncommon geology. Longer tours give more adventurous spelunkers a taste of what it was like for early explorers to navigate tight underground spaces.

This cave, about 45 minutes south of Salt Lake City in the picturesque Wasatch Mountains, has one of the greatest concentrations of helictites in the world. Helictites are some of the most fragile cave formations, formed by water that changes direction and does not drip down on a straight vertical axis, causing thin, twisting tubes that appear to defy gravity. The cave features other fascinating and colorful decorations, such as cave bacon, cave popcorn, intricate frostwork and dramatic displays of flowstone, including the large, hanging structure shown above, known as the Heart of Timpanogos. (Note: Due to snows in the mountains, this site is generally only open for tours from mid-May to September, and visitors must climb a 1.5-mile access trail uphill to access the cave.)

When two prospectors found the natural entrance to this cave in 1900, they noticed the prevalence of calcite crystals lining the walls and gave the site its glittery name. The prospectors hoped to turn the site into a tourist attraction and weren’t successful, but President Theodore Roosevelt learned of the cave and designated it a national monument in 1908. Two cavers, Herb and Jan Conn, were integral to revealing the wonders of the cave to the world; between 1959 and 1979, the couple took roughly 700 trips into its depths, mapping 62 miles of passageways and noting the site’s unusual geography and formations. To date, explorers have collectively mapped more than 192 miles of twisting underground passageways in this cave system and continue to find more each year, making it currently the third-largest cave in the world.

Unlike most caves, this Southeastern site is remarkable not for its geology but the people who have lived in its compact space — including virtually every cultural group that inhabited prehistoric Alabama over the course of more than 10,000 years. Though it is only about 2,000 square yards in size, the cave’s year-round stream and consistent temperature made it attractive to a variety of American Indians for shelter and religious ceremonies. It is one of the oldest rock shelters in the eastern United States and contains a wealth of archaeological remains as well as 24 burial sites. The cave looks remarkably similar today to the way it would have appeared to Paleoindian peoples, the first humans to occupy North America. The site is also associated with the Trail of Tears National Historic Trail and one of the last regions where the U.S. government forcibly removed members of the Cherokee Nation from their homelands.

#{image.caption}
The Parachute Shield, one of the most famous structures in Lehman Caves at Great Basin National Park.   National Park Service photo.

Just two miles long, Lehman Caves offer a remarkable concentration and diversity of geologically interesting formations in a relatively small space, including more than 300 of the unusual clam-shaped deposits known as shields (perhaps the most famous of these structures, the Parachute Shield, is shown above). The park also features a wealth of other formations — soda straws, flowstone, helictites, popcorn, draperies and more — that visitors can admire up-close in vivid detail.

These two adjacent California parks are famous for their towering redwoods. They also contain a wealth of natural wonders underground, including at least 275 caves (a number that continues to rise as more are discovered), numerous karst streams and fossils that date to the Pleistocene era. Most of these caves are kept wild and undeveloped, but visitors can tour Crystal Cave, a branching 3-mile set of passageways heavily decorated with formations, including rare ones such as raft cones, which are formed when thin, sheet-like deposits gather in cave pools, creating a cone shape that evolves upward from the cave floor.

Related: To learn about spectacular high-altitude caves in an environment few people have ever experienced, read a 2015 National Parks magazine article on an expedition to study ice caves at the summit of Mount Rainier.