It’s ironic that the place known as the First State was the last state to have its own national park site.

The nickname refers to the small but storied Delaware and its role as the first state to ratify the U.S. Constitution. When President Obama designated the state’s first national park site in 2013, which interprets much of the area’s Colonial and pre-Colonial history, the park adopted this title and became the First State National Monument. 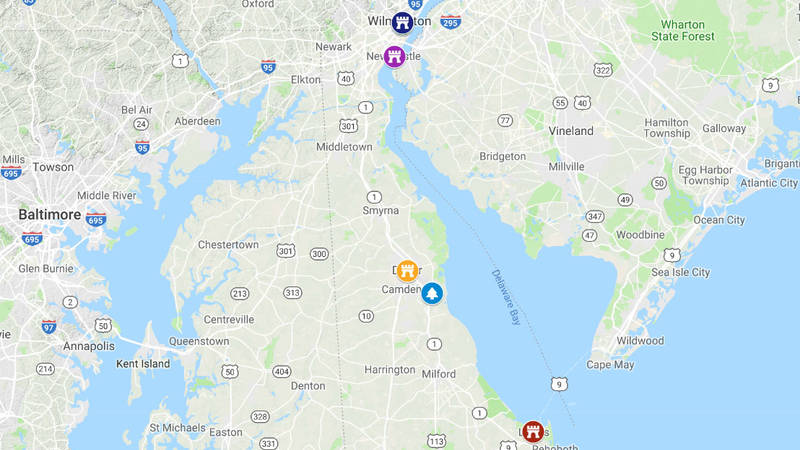 The seven sites that make up the national historical park are spread across Delaware’s three counties.

The park, which Congress redesignated in 2014 as the First State National Historical Park, preserves seven separate sites in all three Delaware counties (extending into the Chadds Ford area of southern Pennsylvania as well). Collectively, these sites preserve stories of the Native American Lenape people who first lived in the state, the early Dutch, Swedish and English settlers who jockeyed for control of the region, the colonists who fought for America’s freedom from Britain, and the people and places that were part of the state’s early history.

The largest tract in the historical park is a parcel of 1,100 acres along the Brandywine River in New Castle County known as Woodlawn. This land in the northern part of the state was once home to the Lenape tribe and later belonged to William Penn, the man best known for founding the colony of Pennsylvania. In the late 1700s and early 1800s, the river supported a bustling mill industry of paper and textile manufacturers — even the paper used to print the Declaration of Independence was made here — and the region was also home to the Wyeth family of artists who famously captured its forested landscapes in their paintings. One of the most extensive battles of the Revolutionary War was fought on the banks of the Brandywine River in 1777 as General George Washington’s army fought continuously for 11 hours in a failed attempt to keep the Redcoats from taking Philadelphia.

The New Castle Court House at First State National Historical Park in central Delaware, one of the oldest courthouses in the country.

Today, the historical park preserves approximately 10 miles of riverfront from the Pennsylvania border to the city of Wilmington, and visitors can hike, bike and ride horses along 18 miles of Woodlawn’s trails. In downtown Wilmington, the three other significant historic sites are part of the park, including one of the oldest courthouses in the country, which once served as Delaware’s first court and capitol building and is now a museum. Visitors can also see Fort Christina, the site where Swedish and Finnish settlers first landed in the New World, and the Old Swedes Church, a historic 1699 building that is still used for worship and special events.

South of Wilmington, in Kent County, the Dover Green is a historic square in the capital city where state officials voted in 1787 to ratify the Constitution, earning Delaware — and the park — its title as “first.” The Green hosts events throughout the year and is located within walking distance of other historic downtown attractions, including shops and taverns that date back to the 18th century.

And down near Cape Henlopen on the state’s southeastern tip, the historical park includes the Ryves Holt House, a home built by Danish settlers in 1665 that is believed to be the oldest house in Delaware and one of the 50 oldest structures in the country. It serves today as a visitor center and gift shop for the Lewes Historical Society in the small beachfront town of Lewes.

The Ryves Holt House, built in 1665 and believed to be the oldest house in Delaware.

The First State National Historical Park was years in the making, created after persistent advocacy from the Delaware congressional delegation and cooperation from other conservation agencies — so perhaps it is only fitting that the state would make up for lost time by packing so much history into one varied site. Learn more about where to go and what to see on the National Park Service website.