The wolf population at this remote Michigan park has been dwindling for years. A new plan, supported by the island’s eminent researcher, will benefit the animals and the ecology of the island.

Last month, the National Park Service announced a plan to introduce 20 to 30 gray wolves at Isle Royale National Park, an essential step toward preventing this iconic species from disappearing completely from the park. NPCA expects the agency to follow up with an official decision soon, setting the plan in motion for wolf introductions to begin as early as this fall.

Isle Royale is a remote island in Lake Superior. Researchers once documented a population of 50 wolves on the island in the 1980s, but now just two remain. This dramatic loss has noticeably contributed to the island’s growing moose population and thrown the ecosystem out of balance.

Rolf Peterson is one of two principal investigators from Michigan Technological University, along with ecologist John Vucetich, studying the interactions of wolves and moose on the island. Isle Royale’s Wolf-Moose Project began in 1958 and is now the longest-running predator-prey study in the world. Peterson began working on the project as a graduate student in 1970 and has since spent his entire professional career researching the interactions of these two species in this isolated park environment. 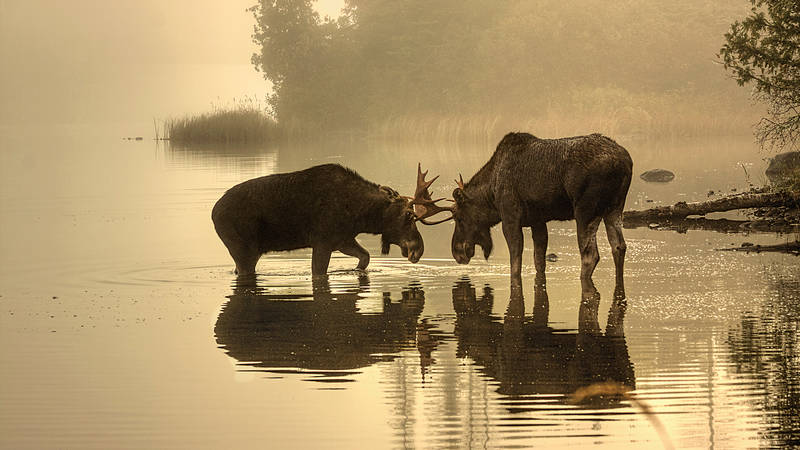 The Case of the Shrinking Moose

A new study reveals the surprising effects of climate change on this iconic species in Isle Royale National Park.

Peterson and his colleagues will be releasing their 60th annual Wolf-Moose Project report in the coming weeks, and the latest findings document the continued growth of the park’s moose population and support the Park Service’s recent announcement to bring new wolves to Isle Royale.

“I’ve been on record for many years recommending new wolves be brought in,” said Peterson. “It’s all about the integrity of the natural system at Isle Royale and the values that management has placed across the National Park Service on maintaining natural assemblages of species … To do that, all the players have to be in place, and that includes top carnivores — particularly when there’s a population of prey, large ungulates, in this case, moose, that have no other effective predator.”

Wolves did serve as effective predators for decades, but over the years multiple factors reduced the population, and now warming temperatures have compromised the animals’ only route on and off the island: ice bridges. According to Peterson, ice bridges were much more consistent and solid in decades past. Historically, these bridges formed for more than 50 days a year, allowing wolves ample time to migrate. Over the last 20 years, the ice bridges have been far less common and consistent. And this past year, solid ice bridges were only available for a total of seven days, effectively stranding the two last wolves at Isle Royale and preventing newcomers.

Still, introducing new animals to a remote wilderness environment such as Isle Royale is not a decision that park managers have taken lightly. Park Service staff have been weighing several options for years, including a “wait and see” approach, holding out hope that the wolves might recover without human intervention. Now that the wolf population is down to just two inbred animals, there is no chance of a natural recovery, and the loss of wolves is already affecting the overall health of the island.

“Ultimately, it boils down to vegetation,” said Peterson, noting that the abundance of moose have changed the makeup of plants on the west side of the park. As moose eat native trees and saplings, exotic grasses are moving in, breaking up the forest. “Only spruce trees grow up without any influence by moose in upland areas. All the other tree species are slowed down or prevented from growing. Balsam firs are particularly susceptible to being eliminated … because [the tree] grows so slowly.” Ultimately these changes have cascading impacts on the rest of the ecosystem.

NPCA was an early advocate for wolf introduction, convening a public forum in 2013 that brought together scientists, park managers, wilderness advocates and other experts, including Peterson, to support the best possible position for the national park. NPCA supporters have since written comments to the Park Service to advocate for this reintroduction — actions that will soon pay off for the park.

The Park Service’s preferred plan calls for introducing the wolves over a three-year period, trapping and moving animals from one of several appropriate sites. The exact timing for the start of the reintroduction is unclear, and Peterson admits it would be “a bit of a stretch in terms of speed,” but there’s a chance there could even be wolves on the ground in time for the next breeding season, which begins in February 2019.

“The sooner that happens, the better it is for the integrity of the whole island,” he said.