Six months is a reasonable amount of time to complete the 2,181-mile-long Appalachian Trail, which stretches from Maine to Georgia and is part of the National Park System, but Jennifer Pharr Davis has a different scale for reasonable than most people. On July 31, 2011, she set what was then the fastest known time record on the AT, as hikers refer to it: 46 days, 11 hours, 20 minutes. Her new book, “The Pursuit of Endurance: Harnessing the Record-Breaking Power of Strength and Resilience,” chronicles her achievements and delves into the nature of endurance. In this excerpt, she is just setting out on her history-making hike. 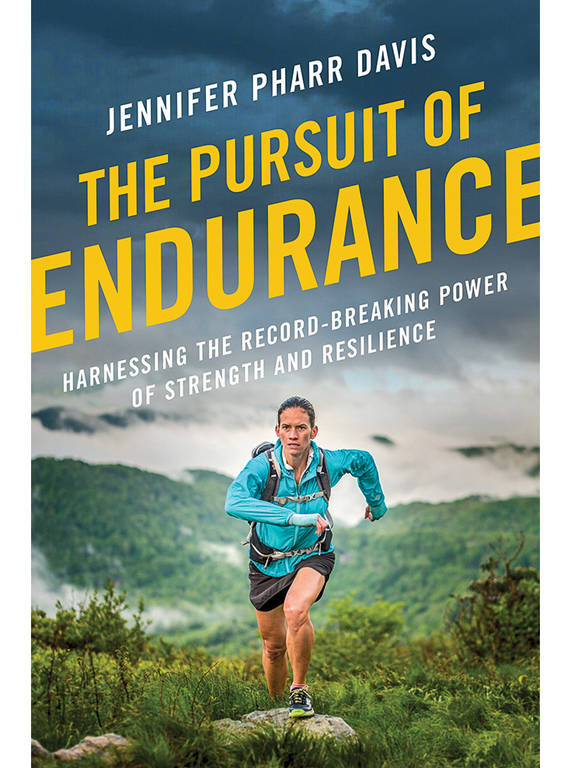 Jennifer Pharr Davis, who set a fastest known time record on the Appalachian Trail in 2011, has written a new book about endurance. See more: http://parkb.it/tpoe

I repeated my mantra about risk and belonging standing on top of Mount Katahdin next to the weathered brown sign that marked the Appalachian Trail’s northern terminus. It was much easier to believe now that I was actually on the trail.

In the beginning, I felt at home and at ease, even as my body adjusted to the back-to-back-to-back 40- and 50-mile days. But I knew enough about the AT and fastest known times to wonder not so much if something would go wrong, but when.

It took five days. Five days before my lower legs felt like someone was scraping muscle away from bone with a knife. I had never had shin splints before, and I haven’t had them since, but they left me with a fear of pain that I didn’t have before that summer. To stub my toe was to send daggers into my shins and shock waves through my body. Going uphill was excruciating, but going downhill was unbearable. There were times when I would plant my foot and my leg would involuntarily buckle from the pain.

I howled and yelped aloud as I hiked down the trail. I also wept. My hiking poles became crutches, and I popped ibuprofen pills as if they were breath mints. In the darkness of my tent, as exhausted as I was, I spent precious minutes, even hours, elevating, icing and wrapping my legs, forced into choosing first aid over sleep.

The primary treatment for shin splints is rest, but I knew that David Horton, a mentor who had previously held the fastest known time record on the AT, had exited the Smokies with shin splints and ran through the pain until it finally subsided. His example gave me hope. I convinced myself that if I could make it through New Hampshire, if I could just get past the toughest mountains and the rockiest terrain, then when I crossed into the Green Mountains in Vermont, everything would be OK.

First, however, I had to survive the exposed ridges and extreme weather of the White Mountains. As I left the parking lot at the Pinkham Notch mountain pass, I could see the skies darkening and feel the temperature drop. My chest grew tight and my stomach felt queasy. When I reached tree line, the wind forced me to look down. Even if I had been able to keep my head up, it would not have helped much since the route was obscured by billowing cloud cover that only occasionally offered a glimpse of the next cairn.

The limited visibility caused me to take a wrong turn, and I lost six grueling miles to the mountain and the weather. When I finally reached Crawford Notch on the far side of the Presidential Range, the rain was pouring down. I was cold, wet and trying to do anything I could — including singing out loud — to keep my morale from completely washing away.

I told myself that the weather would change. It always does. I sloshed through puddles to reach Zealand Falls. Then, though my hands felt like frozen lamb shanks, I used them to scramble up the boulders that lined the ascent to Garfield Ridge. On the path along the crest, I couldn’t maintain my footing or find much traction on the butter-like clay and slick rocks. I fell again and again. My legs were stiff, swollen pillars covered in red scrapes and blue and black splotches. I came out of the forest to traverse Franconia Ridge. And it was there that the weather finally changed.

On June 24th, I was in the throes of a whipping sleet storm.

I wasn’t thinking about the record. All I could do was focus on getting down the mountain to my husband, Brew. My body was rigid, my teeth were clenched and my fingers didn’t exist. My waterproof layer was sealing the cold wet fleece and long johns to my skin like plastic wrap. I was starving, but I doubted I could open my pack or an energy bar with my numb, sock-covered hands. I also didn’t want to risk stopping to grab a snack from my pack for fear that I might not start moving again.

I finally stumbled to the base of the mountain. Brew assumed there had been bad weather, and he hiked in as far as he could and found a flat spot to set up the tent. When I saw it, I fell inside. He helped me undress, and then put me inside two sleeping bags. I kept shivering in my cocoon for a full 30 minutes until I finally had the dexterity to hold food in my hands and lift it to my lips. In the next 20 minutes, I consumed over 3,000 calories.

When I couldn’t eat anymore, I knew I needed to get going. It was now or never. If I didn’t want the record attempt to be over, I needed to start hiking again. I changed into the warm, dry, clothes that Brew had packed in, but I couldn’t find a dry pair of pants.

I looked at Brew and pointed at his lower half.

Brew looked down at his pants and then back at me.

A few minutes later, I crawled out of the tent and slowly started walking in my husband’s rain pants. Brew packed up our gear and walked a half-mile back to the road wearing boxers with the Grinch who stole Christmas on them.

I kept going after the sleet storm, but my body wasn’t recovering. Two days later, I didn’t think I could take another step. I felt overwhelmed with fatigue and fever, my body was swollen from water retention and I couldn’t sweat or pee. My systems were no longer self-regulating, and my body was shutting down. Then my stomach started to churn.

For a while, I was covering more ground laterally by dodging off the trail into the bushes than I was progressing forward. Finally, I came dragging out of the forest in a wobbly, tearful haze, and I told Brew, “We’re done. I’m done. Let’s go home.”

I told him how sick I was and how much I hurt. My husband is kind and sympathetic. He also does not enjoy spending his summer running my errands and sleeping in a tent by a trailhead. I knew he would comfort me, then take me home.

And I was nodding my head. Then he continued, “But … you can’t quit right now.”

I looked up at him, stupefied. I was so exhausted that I wasn’t sure what he meant.

“Right now you feel too bad to make a good decision,” he said. “Right now, you need to eat, drink and take medicine then keep going a little farther, at least until tomorrow night. Then, if you still want to quit, I’ll take you home.”

Brew traded out my gear, loaded me down with Pepto Bismol, then drove off. It’s really hard to quit when you don’t have a ride.

By the end of the day, I started to feel a little better. Even then, I still felt worse than I had in my entire life. I didn’t know if I could set the record, but I realized that if I wanted to, I could at least keep going.

After a day and a half, my husband didn’t ask if I wanted to quit, and I didn’t mention anything more about stopping. We just went about our camp chores as usual, and I kept hiking. I realized I wasn’t out here to be the best; I was out here to find my best.