The Rise of the National Park Mascots

Guadalupe Mountains National Park in Texas is best known for its towering limestone peaks, but within its boundaries visitors can find drastically different ecosystems — from the Chihuahuan Desert to ponderosa pine forests and rocky canyons — that host an incredible biodiversity. More than 1,000 species of plants, 289 different birds, 55 kinds of reptiles and 60 species of mammals live there, and much of the park is a designated wilderness area. Yet, park staff found that many visitors not only didn’t know how important this wilderness is for Guadalupe, but were also intimidated by it. 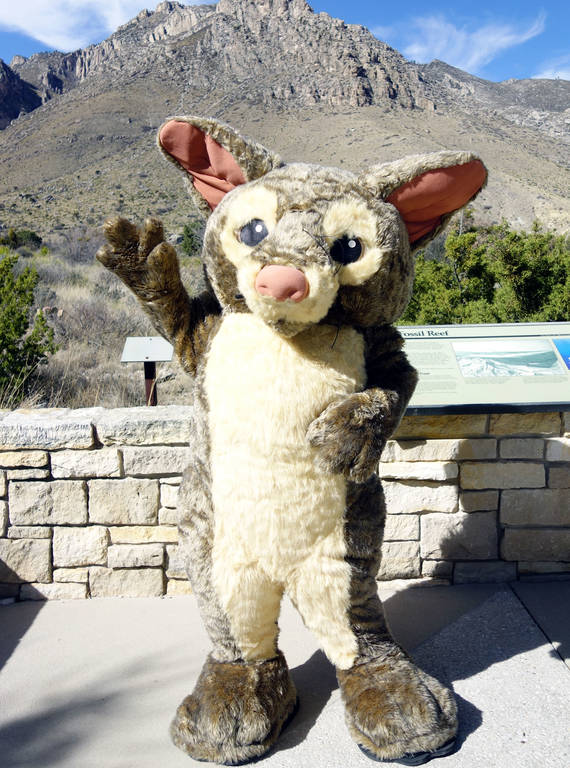 Guadalupe’s rangers thought one of the park’s cutest denizens might help. Of course, enlisting the services of a wild animal for community outreach is not an option at a national park, so staff settled for the next best thing: a human-size ringtail costume. Since the debut of G. Lupe Ringtail (“Lupe” for short) last February, the mascot has been a big hit with visitors who have found this one representative of Guadalupe’s wilderness very approachable.

“People’s barriers come down, and they open to our wilderness message,” said Elizabeth Jackson, the park’s chief of interpretation and visitor services. “So many children and full-grown men want to come up and hug you in the suit — in a safe way.”

Anthropomorphic mascots have long been used by corporations, sports teams and large events such as the Olympic Games as branding tools and ways to connect with audiences, especially younger ones. Perhaps the most successful and enduring federal government mascot, Smokey Bear, has been advocating for wildfire prevention since 1944 (in a case of brand confusion, Smokey Bear, who is often viewed as a national park icon, actually represents the U.S. Forest Service). Other less popular government mascots followed, including a thermometer named Thermy, from the U.S. Department of Agriculture’s Food and Safety Inspection Service, Smokey Bear’s Forest Service colleague Woodsy Owl (“Give a hoot; don’t pollute!”), and Franklin the Fair Housing Fox from the U.S. Department of Housing and Urban Development.

Despite having so many charismatic creatures under its care, the National Park Service has so far made limited use of mascots in its outreach and branding efforts, but that may be changing. The agency does not keep tabs on the use of mascots throughout the National Park System, but in recent years rangers at parks across the country have developed their own mascots to join the likes of Carlsbad Caverns National Park’s Carl S. Bat and Mississippi National River and Recreation Area’s Freddie the Flathead Catfish. 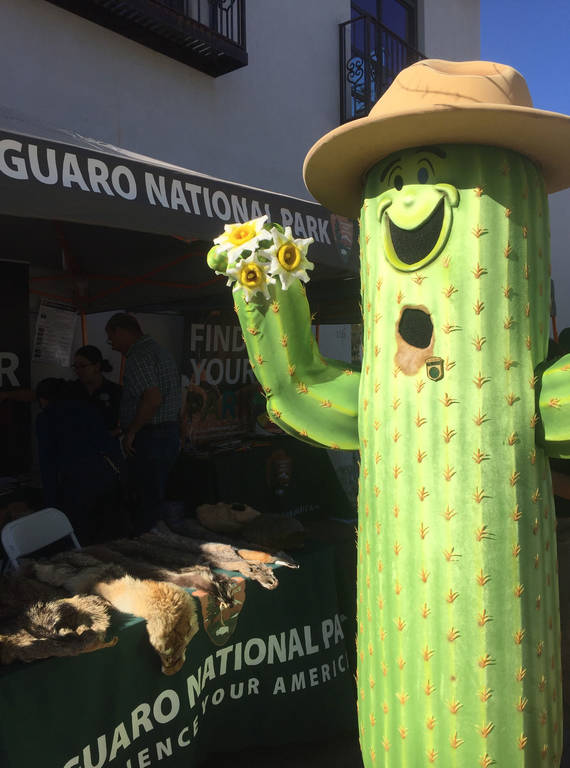 Saguaro cacti are not exactly mobile, so it’s no surprise Sunny Saguaro, the mascot of Saguaro National Park, used to spend most of his time inside the park. But Cam Juárez, who became Saguaro’s community engagement coordinator a couple of years ago, thought Sunny could have a larger impact outside of the park’s boundaries, and he took Sunny to parades and festivals. It’s no easy task. “Sunny, for all intents and purposes, is a large PVC pipe,” Juárez said. “The range of walking is very limited.”

Tucson has a large Latino population, and Juárez, whose parents immigrated from Mexico, has made special efforts to reach out to this community. He said many Latino residents don’t visit the park because they lack the necessary financial resources or a means of transportation, but he found that the main obstacle is that they don’t know there is a national park in their backyard. Sunny, along with Juárez and a helper who makes sure he doesn’t fall backward, are raising locals’ awareness. The mascot’s park ranger hat and badge help Juárez dispel myths about rangers being police officers, and kindergarten children who’ve met Sunny ask their parents to take them to Saguaro.

“Sunny has the same exact effect on people of any background,” Juárez said. “It’s always that same elated reaction.”

A lack of awareness among local residents was also the problem faced by River Raisin National Battlefield Park. The Michigan park, which was established in 2010, commemorates the site of the greatest American defeat during the War of 1812. “So no one wanted to talk about it,” said Jami Keegan, an interpretative ranger at the park. The battlefield also was buried under industrial and residential buildings, and much of it remains underground. The result is that even some longtime residents of Monroe, the small city where the park is located, didn’t know of River Raisin’s existence, Keegan said.

The park’s superintendent came up with the idea of using a mascot to publicize the park, and the staff chose the muskrat, which played a role in the park’s history. During the harsh winter of the Battles of the River Raisin, the area’s settlers ran out of food and survived on a diet heavy on muskrats, Keegan said. “In honor of the muskrat sacrifice in 1812, we decided to honor their memory and make Major Muskrat the mascot of the park,” she said. Major Muskrat is now an integral part of the park’s interpretive staff and participates in parades and numerous community events. He even has his own Facebook page and receives so many invitations to local gatherings that he’s been nicknamed Major Magnet.

Keegan said some of the staff at the area’s bigger parks tease River Raisin rangers because they say the park is too small to warrant its own mascot, but Keegan has a ready answer to that. “We’re so small,” she said. “That’s why we need a mascot!”

Mascots can also help parks convey their safety messages to visitors. Before moving to White Sands National Monument in New Mexico, Becky Burghart had been working at Chamizal National Memorial, where staff launched Chami the Ground Squirrel in 2010 to educate visitors about the wildlife of this El Paso urban park. White Sands presents a number of safety challenges: Sunlight reflected off the park’s gypsum dunes increases sunburn risk and can be blinding; it’s easy to become disoriented in the white dunefield; and temperatures can exceed 100 degrees Fahrenheit from May to August. Staff were looking for ways to help visitors prevent heatstroke and dehydration, and they picked the roadrunner, New Mexico’s state bird and a common sight at the park, as a safety ambassador of sorts. Burghart, who has recently moved on to the Hanford, Washington, site of Manhattan Project National Historical Park, said Riley the Roadrunner was a great way to capture the attention of children, who in turn would make sure to tell their parents to wear their hats and sunglasses and drink plenty of water. 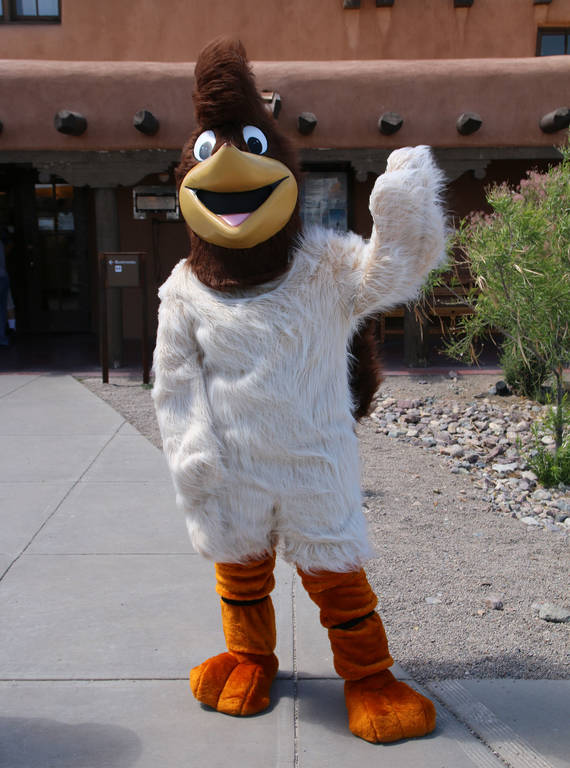 Safety instructions were not limited to visitors. Riley has a built-in fan in its head, and staff and volunteers who don the costume can wear an ice vest underneath. “We definitely had to limit the amount of time people spent in the mascot because it gets really hot,” Burghart said.

Pecos National Historical Park, which is also located in New Mexico, recently decided to select a roadrunner for its junior ranger book (“We got a little bit of pushback from people who want us to have a unique mascot,” said Becky Latanich, the park’s chief of interpretation and education). Pecos has stopped short of creating a full-size mascot costume because the park, along with other small New Mexico park sites, already work with Buddy Bison, a mascot of National Park Trust, which provides outdoor experiences to children in under-served communities nationwide. “We don’t want to compete with that,” Latanich said.

Guadalupe Mountains’ Jackson said the staff there briefly considered other options for the park’s mascot. The agave was quickly out of the running (“They’re not cuddly,” Jackson said), and they eventually picked the ringtail, a nocturnal relative of the raccoon, because they wanted a species that was native to the park and that was obscure enough to pique people’s curiosity. Jackson went back and forth with the contractor who designed the mascot to make sure the costume was anatomically correct and allowed rangers to discuss the animal’s features and their functions (the ringtail’s large ears and eyes make it easier to navigate at night, and its long tail help with balance). The costume has its own air-conditioning unit. “Trust me, it’s not something you want to run a marathon in, but it’s comfortable,” Jackson said.

One question remains: “We don’t know if Lupe is a boy or a girl,” Jackson said. “We don’t need to discover that!”

To give visitors ownership over the process, staff organized a contest where people could vote for their favorite mascot name at the park’s visitor center, on Facebook or in local papers. G. Lupe Ringtail edged out “Ringo” and “Wallace the Rootin Tootin Strip Stripey Squirrel Monkey.”

A few visitors want to pull Lupe’s inflatable tail, and the occasional baby will cry at the sight of the six-foot mascot, but overall Lupe has been a great success with visitors who want to hug him (or her), pose for photo opportunities, and hopefully retain some of the wilderness message rangers try to get through.

Jackson said some colleagues give her a hard time for describing the process as one of her greatest professional achievements, but that’s the way she sees it.

“It was a hallmark of my career in a way,” she said. “It was the most creative fun I’ve had, honestly.”