10 Facts You Might Not Know About Frederick Douglass, in Honor of His 200th Birthday

This famed abolitionist’s story is even more fascinating than what many of us learn in school.

He escaped slavery at age 20 and went on to become one of the most important political activists fighting for emancipation and the equality of all people. He published three autobiographies, spent years writing and editing an influential abolitionist newspaper, broke barriers for African Americans in government service, served as an international spokesman and statesman, and helped combat racial prejudice during the Reconstruction Era. And yet there is even more to know about Frederick Douglass’ remarkable story than the facts we learn in school.

Here are a few things that might surprise you about this pioneering historic figure as the National Park Service prepares to celebrate the bicentennial of his birth at the Frederick Douglass National Historic Site in Washington, D.C., February 17-18, 2018.

1. One of the reasons we celebrate Black History Month in February is because of Frederick Douglass. Historian and educator Carter G. Woodson founded the precursor to Black History Month, “Negro History Week,” to coincide with the time of year when both Douglass and Abraham Lincoln celebrated their birthdays. Although Douglass was born into slavery and his actual birth date is unknown, he chose to commemorate his birthday on February 14. 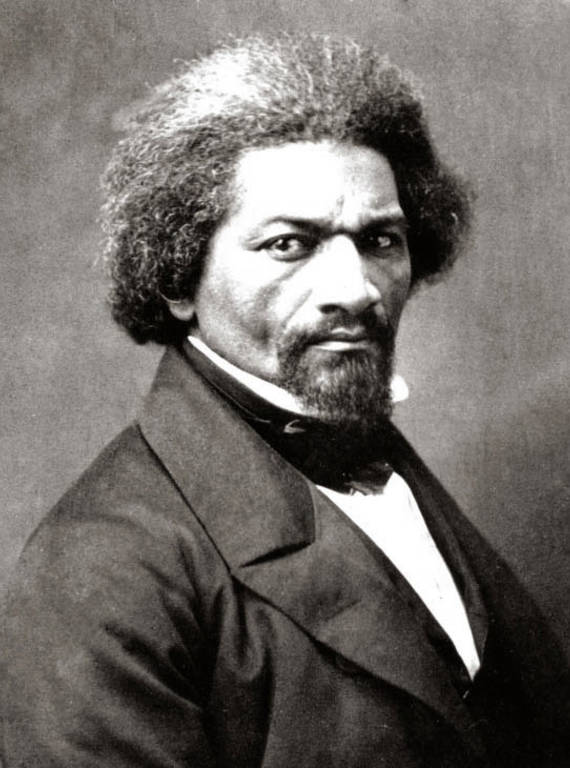 2. Douglass was the most photographed American of the 19th century, sitting for more portraits than even Abraham Lincoln. Douglass intentionally sought out the cameras, believing that photography was an important tool for achieving civil rights because it offered a way to portray African Americans fairly and accurately. He intentionally did not smile for the camera, in part because he wanted to counter “happy slave” caricatures that were common at the time, particularly at places such as minstrel shows where white actors performed racist skits in blackface.

3. Frederick Douglass chose his name from a poem. Douglass was born with the name Frederick Augustus Washington Bailey. After he successfully escaped slavery in 1838, he and his wife adopted the name Douglass from a narrative poem by Sir Walter Scott, “The Lady of the Lake,” at the suggestion of a friend.

4. Douglass became a free man thanks to help from European allies. His first autobiography, “Narrative of the Life of Frederick Douglass, an American Slave,” was so popular after it was published in 1845, he feared the publicity could lead to his capture, and he chose to live in Ireland and Britain for two years. While abroad, he went on a speaking tour and his British supporters were so moved, they collected funds to purchase his freedom in 1846. His autobiographies remain some of the most important and widely read accounts of slavery today.

5. Douglass was the only African American to attend the First Women’s Rights Convention held in Seneca Falls, New York, in 1848. Shortly after the convention, Douglass wrote in his influential weekly abolitionist newspaper, the North Star, “In respect to political rights, we hold woman to be justly entitled to all we claim for man.” In 1866, he cofounded the American Equal Rights Association with Lucretia Mott, Elizabeth Cady Stanton and other feminist leaders supporting suffrage for all people.

#{image.caption}
Cedar Hill in Washington, D.C., where Frederick Douglass lived from 1877 until his death in 1895, is home to the national historic site in his name.   Library of Congress

6. During the Civil War, Douglass passionately helped enlist free black men to fight in the Union Army, convinced it would help African Americans win freedom, respect and full citizenship. He wrote persuasive articles in his weekly newspaper, and when President Lincoln issued the Emancipation Proclamation in 1863 allowing African Americans to serve, two of Douglass’ sons were among the first to enlist. Douglass also helped improve conditions for the soldiers, meeting with Lincoln on issues such as equal pay and merit-based promotions, which African American soldiers eventually received.

7. Douglass was the first African American to receive a vote for president at a major political party convention. The vote came from the Kentucky delegation during the Republican National Convention of 1888.

8. Douglass was also the first African American to receive a vice presidential nomination when Victoria Woodhull, the first woman to run for president, chose him as her running mate at the Equal Rights Party Convention in 1872, although he did not acknowledge the nomination or campaign for the office.

9. Later in his life, Douglass did much of his writing and deep thinking in a one-room cabin that he referred to as his “Growlery.” This odd name for the building on Douglass’ Cedar Hill property in Washington, D.C., was likely a reference to “Bleak House” by Charles Dickens; in the book, the character John Jarndyce has a small library next to his bedroom where he goes when he needs a place of refuge. Today, the Park Service maintains a replica of the Growlery at the Frederick Douglass National Historic Site made with materials from the original stone structure.

10. Many of Douglass’ possessions were lost in a devastating fire in 1877. Douglass was visiting Washington, D.C., in 1877 when his home in Rochester, New York, burned down in a suspected arson that destroyed most of his family’s possessions. He went on to purchase Cedar Hill, the property that would become his final home and the national park site in his name, and he lived in the nation’s capital from that point on instead of returning to New York. Hundreds of Douglass’ letters and the only known complete set of Douglass’ newspapers were lost in the 1877 fire, and no photographs of the Rochester home survive. All of the books, furniture and photographs that firefighters saved from the blaze were sent to Cedar Hill, however, and the Park Service continues to preserve surviving artifacts, from his collection of walking canes to the violin he taught his grandson to play. In 1927, the city of Rochester built a public library at the site of Douglass’ former home that was formally renamed the Frederick Douglass Community Library in 2016.

Learn more about Douglass and his legacy at www.nps.gov/frdo.