By Karuna Eberl
Winter 2018: Below Biscayne

The search for a pirate slave ship — and the stories that disappeared with it.

Kramer Wimberley could barely see. A cloud of sand obscured his hands, but the volunteer diver tried his best to stay focused on his job. On one end of a dredge hose, archaeologists sucked up sediment. On the other end, Wimberley worked diligently to keep debris from clogging up the operation.

“All of a sudden the dredge stopped,” he said. “Then I heard people screaming underwater, so I knew something was happening.”

The sand soon settled, and the water became so clear that even those peering down from boats could see what the hubbub was about. A small cannon, or carronade, lay exposed on the ocean floor.

“I’m thinking, ‘Okay, this may actually be it,’” Wimberley said. Had they finally found evidence of the slave ship Guerrero, which sank nearly 200 years ago in or near the waters of what is now Biscayne National Park?

The modern-day search for the Spanish brig began in the 1990s, when historian Gail Swanson wrestled the obscure bit of history from dusty archives. As the story goes, the pirate crew aboard the Guerrero stole prisoners from two illegal slave ships traveling off the coast of Africa, before heading westward on their final journey. (Britain, the U.S. and Spain had banned the slave trade from Africa in the early 1800s, but slavery remained legal.) After crossing the Atlantic, the pirate slaver was nearly home free, less than 200 miles from the slave markets in Cuba, when it was intercepted by the British warship HMS Nimble. A high-seas pursuit and gun battle ensued, and both ships hit the reef. The Guerrero’s mast broke, catapulting through the hold. Screams from the 561 African prisoners on board could be heard across 2 miles of ocean as the vessel slowly rolled onto its side and filled with water.

“There’s a lot of significance tied up in this,” said National Park Service archaeologist Chuck Lawson. “No archaeologist is going to sit here and be responsible for this stretch of water and not want to find this shipwreck. It fills in the gaps of the triangle trade and highlights a history that was taken from people.” 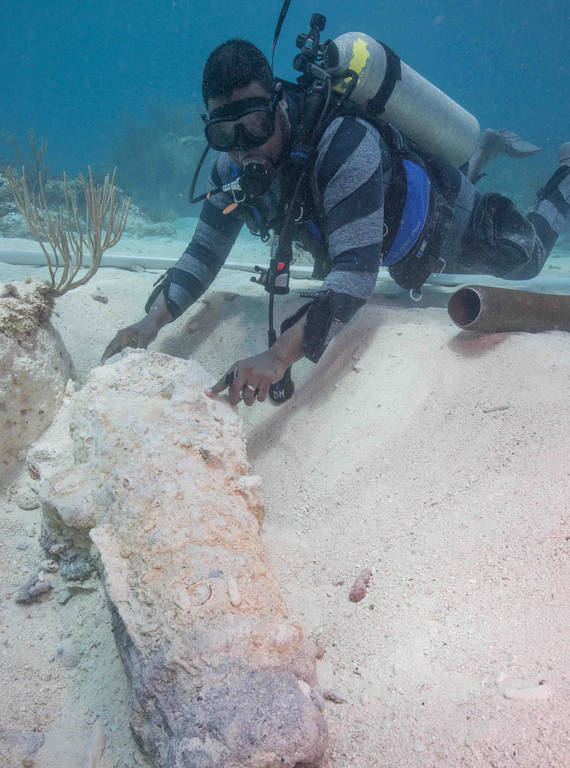 Kramer Wimberley, a volunteer diver, examines a small cannon that archaeologists believe could have come from the slave ship Guerrero, which sank in 1827 in the waters of what is now Biscayne National Park.

Lawson has spearheaded periodic searches for the Guerrero over the last seven years. Wimberley became involved nine years ago, when he joined Diving With a Purpose, a group of mostly African American volunteers who help document shipwrecks in the Florida Keys. This summer, the search accelerated, thanks to a Park Service initiative — along with considerable funding — intended to advance understanding of African American history. The new resources allowed staff to conduct a massive magnetometer survey of the southern third of the park, leading to the discovery of the shipwreck site and carronade.

“Right away we knew it was a cannon, and we got excited,” said Lawson. They quickly ascertained it was from the early 1800s and British. “You can see the distinctive hoop on its breech end. Usually it’s hard to see a lot of diagnostic detail on a cannon covered in marine growth, but this particular style of carronade is pretty distinct.”

Finding any cannon is exciting because they are rare, especially in Biscayne, where decades of looting have taken a toll on cultural resources. This one is even more remarkable because it appears to be undisturbed, lying right where it went down two centuries ago.

On the fateful day the Guerrero sank, Dec. 19, 1827, the Nimble’s crew had to act quickly to save their own ship from going down. They threw ordnance and ballast overboard to lighten their load, which allowed the vessel to float off the reef. Lawson might have found some of those artifacts as well. His team uncovered cannon balls of various sizes and a range of hull fasteners, such as nails and copper spikes. They also found bar shot.

“Imagine a giant barbell being fired out of a cannon and tumbling end over end,” said Biscayne archaeologist Joshua Marano. “That’s bar shot.” This is a particularly encouraging find, according to Marano, because it was used by pirates and naval ship crews trying to take down rigging and people without sinking ships, but was not often found on other types of vessels.

At the suspected Guerrero site, they’ve found some other promising artifacts, including a piece of ceramic plate and copper sheathing. The Guerrero was known to have a copper-covered hull, which was helpful for boosting speed and reducing shipworm damage but relatively uncommon because of the cost. Another intriguing discovery was a group of poorly cast cannon balls.

“It’s almost like they were trying to heat small amounts of iron and add it to a mold piecemeal, which was not a typical thing,” Marano said. “It can tell you these might not have been made by a major nation, but on an island somewhere, possibly by poor merchants or pirates.”

Though Marano and Lawson are excited about their finds, it’s important to note what is missing, they said. Shackles, which would be unmistakable evidence of a slave ship, have yet to be unearthed. They also expected to find the Nimble’s iron kentledge, the typical ballast of British warships of that time, but didn’t, possibly because treasure hunters or people salvaging metal picked it up in the years before the area was protected as a park.

“It takes a while to sort through everything,” said Lawson, who has been meticulously clearing a couple of centuries’ worth of encrustation off the cannonballs. He has been looking for a telltale sign, the British broad arrow stamp, which the government imprinted on everything from barrel hoops to ships’ bells. “I would be so jazzed to find a broad arrow,” he said. 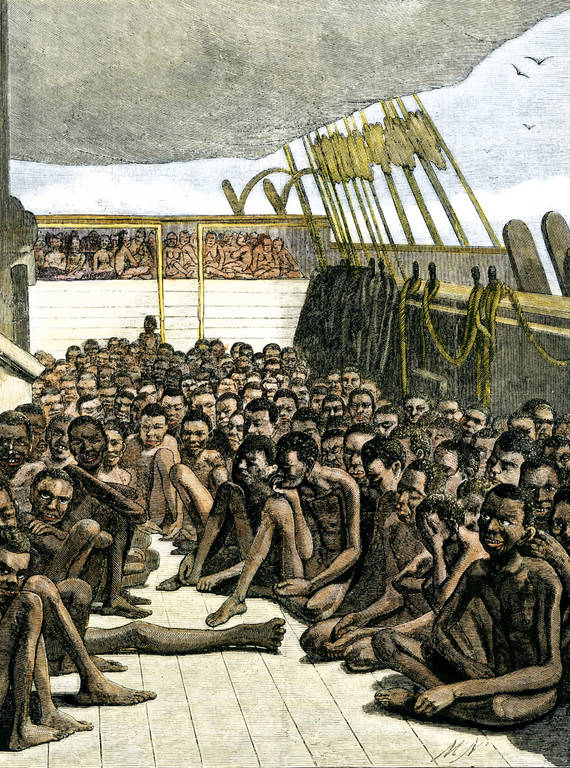 A 19th-century engraving, which was published in Harper’s Weekly, depicts the conditions aboard a slave ship, the Wildfire.

Lawson and Marano still have hundreds of potential wreck sites to dive on, based on anomalies found during their magnetometer study. They also expect to spend many more months cleaning, conserving and researching artifacts before they can say for sure what they have found.

“It’s not like Scooby-Doo, where you have the skeleton sailor at the helm and the sails flapping,” Marano said. “Unless you find a bell with Guerrero on it, there’s not necessarily a smoking gun. It’s a puzzle. You have to keep your mind open to all possibilities.”

Identifying the Guerrero would be a momentous archaeological discovery, because only a handful of sunken slave ships have been found worldwide and just one in U.S. waters. With their search, Lawson, Marano and Wimberley are hoping not only to find rare artifacts but also to tell the larger story about those who died aboard the Guerrero and further illuminate a tragic period in human history. More than 10 million people were enslaved between the 16th and 19th centuries, and millions more died during their capture, internment or journey across the ocean. Of the 561 Africans aboard the Guerrero, 41 were killed in the wreck, 398 ended up being sold in Cuba after the Guerrero’s captain hijacked two rescue boats, 31 died within two years of the incident while awaiting their freedom and 91 eventually returned to Africa.

“I think about the lives of individuals I see in passing on a bus or in a car and I wonder, ‘Hmmm,’” said Wimberley, “‘what is this person’s life like? Where are they on their way to?’ Then I think about one person that was on that ship and what their lives were prior to that, and how it is that they ended up there. We’ve lost our sense of history, and that’s why it’s important to put it back into context, to say this happened, it was wrong, and then to look at where have we come since then.”

Lawson is realistic about the likelihood of finding enough to identify the Guerrero beyond a shadow of a doubt. It’s low. Hurricanes, looting and time have erased much of the evidence. But after hundreds of hours underwater and years on the case, he is as enthusiastic as a kid with a new skateboard.

“We all hope that we find it, because this is one of the most important historical stories that Biscayne National Park would have to share,” he said. “But whatever happens, I’m psyched about what we’re finding. This search is so important. It’s going to advance the historical record of the park substantially, get the story told and bring the history back to life.”