An Appreciation for Those Who Came Before

The expansive views of the Southern Appalachian Mountains from the summit of Hemphill Bald are enough to make anyone want to plop down in the tall grass and spend the day watching the shadows of clouds flow across the landscape. On a sunny Saturday this past summer, however, I found myself joining 30 other volunteers, picks and shovels in hand, to put a little sweat equity back into a landscape that has served my life as both a foundation and a refuge. 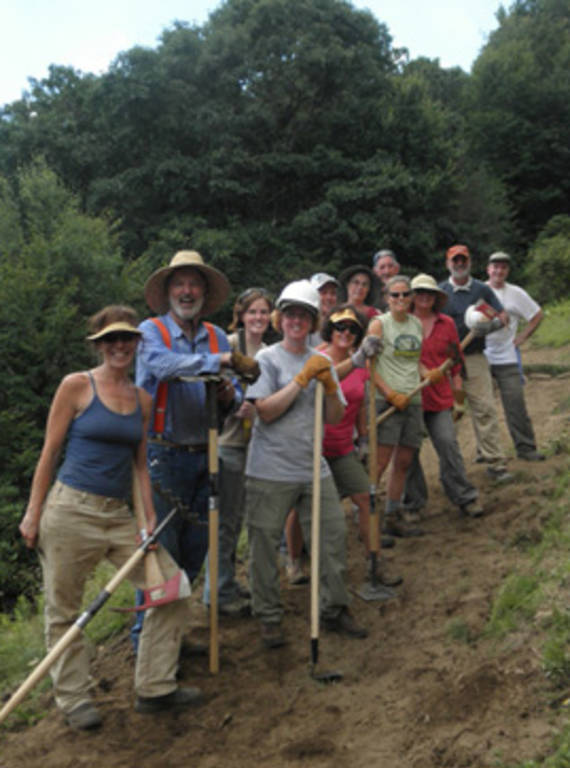 One of the volunteer crews takes time out from their trail improvement project to pose for the camera.

Great Smoky Mountains National Park lies like a pearl on the string of the Appalachian National Scenic Trail, the thread running down the spine of some of the world’s oldest mountains. The rich biodiversity, scenery, and recreation of the region draw more visitors to the Smokies than to any other National Park—more than 9.6 million in 2012. Hemphill Bald lies directly on the park’s boundary and crowns the shared mountainside between the park and the adjacent Cataloochee Ranch. The ranch is privately managed and its owners have granted conservation easements on much of the area to the Southern Appalachian Highlands Conservancy (SAHC), our partners in a project to restore and enhance the critical boundary with the park. SAHC is not only a first-rate land trust, they knowledgably take care of the areas they have worked to preserve.

With the generous and thoughtful support of Nature Valley’s Preserve the Parks program, our volunteers divided into two groups to work on separate projects. One group spent the day selectively clearing brush and trimming vegetation to “feather” the edges between the mountain forests and the adjacent open areas. This edge habitat is critically important to numerous migratory birds and will help the park—which maintains few open areas—to serve as a living link in the chain of the Southern Appalachian Mountains. 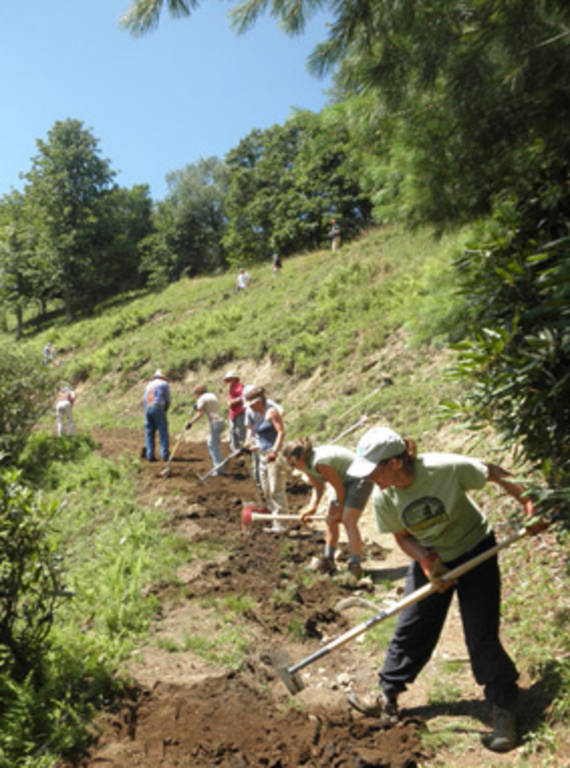 Hard at work helping the trail.

I went with the second group to repair a 50-yard-long section of trail adjacent to the park that was suffering severe erosion. As an avid hiker, I gained a renewed appreciation for the incredible amount of human energy that goes into maintaining such trails in steep terrain. While digging up, re-grading and “out-sloping” (reshaping) the trail was pretty intense, I thoroughly enjoyed exchanging stories with the other volunteers and learning about their connections to the land and the reasons that each of them were there that day.

As we were taking a mid-morning break, an unexpected form of “wildlife” visited us—an emaciated hunting hound that had obviously been lost in the park for some time. The poor animal was so weak that she simply lay down on the side of the trail, unresponsive to our attempts to give water and some of our trail snacks to her—that is, until someone decided to offer her one of the Nature Valley granola bars the company had provided to our crew. She ate two of them right away and then began to take water out of a hard hat—so we nicknamed her “Nola,” short for granola. By the end of the day, Nola was regaining her strength and the folks at Cataloochee Ranch had located her owner in nearby Cherokee, North Carolina, where she made it safely back home. I think it’s safe to say that, to the kind folks at Nature Valley, Nola adds her thanks to ours.

#{image.caption}
Volunteers improve a trail at Great Smoky Mountains National Park—before, during, and after.   Don Barger/NPCA

Our full volunteer group gathered on Hemphill Bald for lunch to swap stories, hear from the Ranch folks about their commitment to preserving this magnificent landscape, and absorb the awe-inspiring view. This day’s work renewed my gratitude for all of the visionaries from the past who worked to set aside these invaluable resources, for the many hands and hearts who have labored to build and maintain the trails I have walked, and how much of each has gone into every step I’ve taken.