WASHINGTON – The following statement by Mark Wenzler, Senior Vice President of Conservation Programs at National Parks Conservation Association (NPCA), is a response to the Trump Administration’s recent rejection of a commonsense policy on how to manage national parks in the face of emerging threats like climate change:

“The most recent move by the Trump Administration to roll back protections for America’s national parks is disturbing and disappointing. Director’s Order 100 aims to give park management policies a much-needed renewal so our parks can better handle challenges not envisioned when the Park Service was established more than a century ago. The update, completed in late 2016, guides park managers in their decisions regarding activities that may harm park resources.

“The order is critical to the long-term health of our national parks, and the administration’s rollback of this order only puts our parks at risk. By taking the science out of park management, our parks will be more vulnerable to damage from development, pollution and activities that mar their natural and cultural resources.

“This latest move by the administration to rescind or weaken policies that protect our public lands and waters only strengthens NPCA’s resolve to keep fighting for the protection of our parks.” 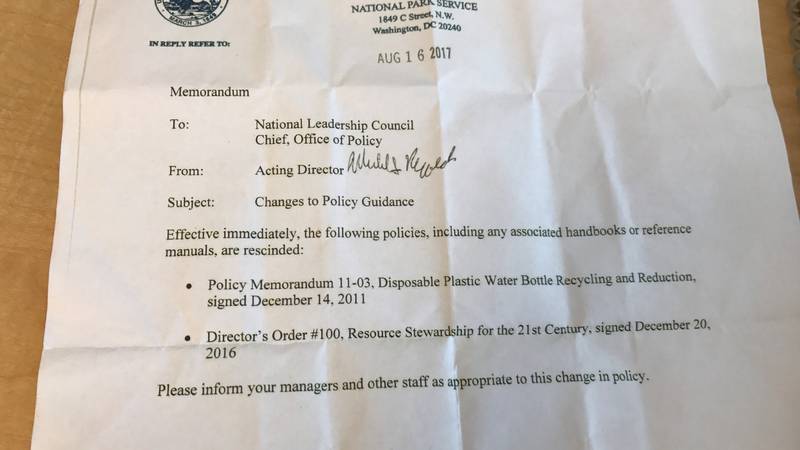 Adopted by former National Park Service (NPS) Director Jon Jarvis in 2016, the centennial year of the agency, Director’s Order 100 represents the culmination of years of planning going back to the George W. Bush Administration for managing parks in the face of current and emerging challenges in their second century.

In particular, the Order singles out climate change, biodiversity loss, invasive species, land use changes, and pollution as challenges that require comprehensive, science-based management responses to ensure the parks’ irreplaceable natural and cultural treasures are preserved “unimpaired for the enjoyment of future generations” as required under the 1916 law that established the National Park Service.

The Trump Administration rescinded Director’s Order 100 on August 16, 2017.  By taking this action, the administration is returning the Park Service to a narrower and outdated resource management strategy that had been judged inadequate by the independent Science Committee of the National Park System Advisory Board in 2012.

Key actions mandated by Director’s Order 100 and how they protect park resources include:

Since 1919, the nonpartisan National Parks Conservation Association has been the leading voice in safeguarding our national parks. NPCA and its more than 1.2 million supporters work together to protect and preserve our nation’s natural, historical, and cultural heritage for future generations.