What Happens When the Water Runs Out?

In a tiny canyon just east of Flagstaff, Arizona, in the San Francisco Peaks are the cliff dwellings of an ancient civilization that farmed and hunted this region 900 years ago. My girlfriend Craig and I were driving east to Santa Fe when we visited the Walnut Canyon National Monument to learn about these long-ago residents and the question that is still relevant centuries later: What happens to a civilization that runs out of water?

Water has long defined where and how people live in the Southwest, and a seasonal creek initially drew people to live in Walnut Canyon. The canyon itself is twisty, narrow and 400 feet deep, with multiple layers of both hard and soft limestone that eroded over millions of years. This shaded environment limits the amount of sun that gets to the canyon floor and helps reduce the creek’s evaporation rate after it fills with the spring snow runoff and the summer monsoon rains. 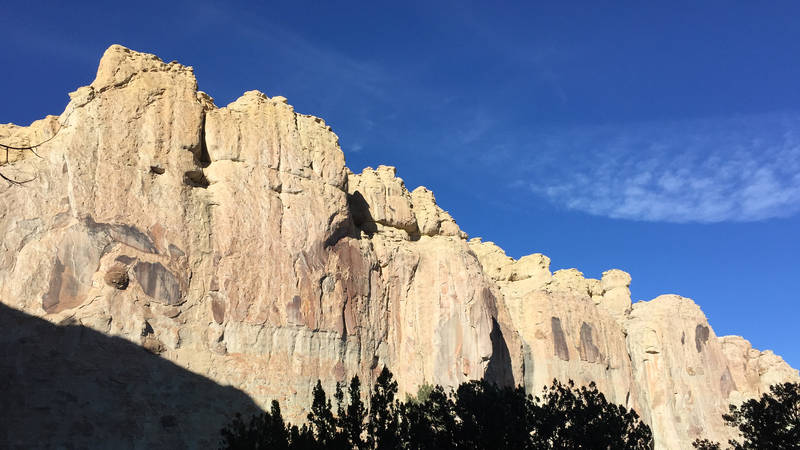 NPCA’s traveling parkie beats the heat at an ancient watering hole and reads messages from the past at El Morro, the country’s second national monument

Archaeologists have found evidence that people likely used the canyon seasonally for thousands of years prior to the Sinagua people arriving around the year 600. Initially building one-room pit houses near their fields of corn, beans and squash on the canyon’s rim, the Sinagua began inhabiting the canyon itself around 1125. Using roughly shaped limestone rocks, clay cement and wood beams, the Sinagua people built over 300 cliff dwellings in the limestone cliff’s shallow alcoves. These shallow alcoves were carved by wind and water in several layers of the softer limestone in the canyon wall, leaving the overhanging harder limestone layers as the dwellings’ ceilings. They stayed for about 125 years before moving on, most likely due to changes in the climate that reduced the amount of water available to grow crops.

Ironically, sin agua is Spanish for “without water” – a tribute to this civilization’s ability to live in a very dry climate. Centuries later, there are lots more people now living in the Southwest. Do we have the same ability?

Our visit to the monument began at the visitor center with a short orientation from a park ranger. There is a short trail along the rim with a good view of the canyon, but we opted instead for a one-mile loop around an island of land created by a horseshoe bend in the creek that takes you by 25 of the cliff dwellings.

The hike begins with 240 steps (185 feet) down to the level of the dwellings at mid-canyon. The top of the canyon is almost 7,000 feet above sea level, so the hike back up those 240 steps can take your breath away! In addition to providing for the human inhabitants here, the availability of water also provides for a unique set of plant communities that change as the aspect of the canyon walls shift from north to south. The Island Loop Trail starts on the shady, north facing slope, and we hiked through a ponderosa pine and Douglas fir forest as we began exploring the cave dwellings. Having grown up in the Douglas fir forests of western Oregon, I was very surprised to see this same tree growing in the drier climates of Arizona.

The National Park Service has done a great job of interpreting daily life in the canyon, and as we walked the Island Loop Trail, the educational panels informed us that most of the cliff dwellings were sites for storing tools, food and water, rather than places where people lived and slept. Water management was a recurring theme. We learned that the Sinagua practiced water conservation by building small dams and terracing the creek to capture water during the rainy seasons.

During dry stretches, which could last up to 100 days, there is evidence that large pots were used to store water. Tools for not only hunting and agriculture, but for making pottery have been found. Storing water for 100 days requires a lot of pots, hence the large number of storage rooms. The thick limestone walls would have kept both food and water cool during the hot season, and in those few dwellings that were used for living, these same walls would help keep people warm in the winter.

The vegetation on the loop trail shifted dramatically when we got to the south-facing slope with its much sunnier, drier and warmer climate. There we found pinyon pine, juniper and yucca plants. Within just a few steps, you can really see the difference sun and temperature can make to the plant community.

The first outside visitors to the region came in the late 1800s and began carting away the many artifacts the Sinagua left when they moved on in 1250. One San Francisco newspaper reported visitors finding bone needles, fishing line, a child’s sandal, arrows and bowstrings, and remnants of corn, beans and gourds that were cultivated in the fields along the canyon’s rim. Because of its close proximity to Flagstaff and the railroad, it became a well-known place to collect native artifacts (some would call this looting, but at the time, collecting native artifacts was not illegal as it is now). This collecting and associated destruction of the site caused President Woodrow Wilson to use the Antiquities Act to protect and preserve Walnut Canyon as a national monument in 1915. It was originally managed by the Forest Service, and officially became a Park Service site in 1933.

Today the canyon is known as Wupatupqa or “long canyon” by the Hopi descendants of the Sinagua. The Hopi still use Walnut Canyon to collect medicinal and ceremonial plants, preserving the connection between local tribes and these ancient cliff dwellers. And thanks to the National Park Service, visitors like Craig and I are able to visit and learn about life here 900 years ago and ponder the parallels between a diminished water supply and the Sinagua’s ability to stay at Walnut Creek, and our contemporary civilization and the Southwest’s demand for water.

What will park visitors 900 years from now say about us?