During the Park Service’s centennial year, more travelers than ever are tackling the challenge of seeing all of the national parks.

Two years ago, newlyweds Cole and Elizabeth Donelson were hiking through the woods outside Kansas City when they started idly chatting about their bucket lists. Starting when he was 6 years old, Cole had road-tripped out to nine Western national parks with his family. They’d camp out, hike and oftentimes attend mountain-man-themed family reunions during which the Donelsons dressed up in 1800s frontier garb — fur hats, leather pants, feathers. Cole loved it. The parks captured his imagination, and he dreamed of going to all of them one day. It just seemed that it would take a lifetime. 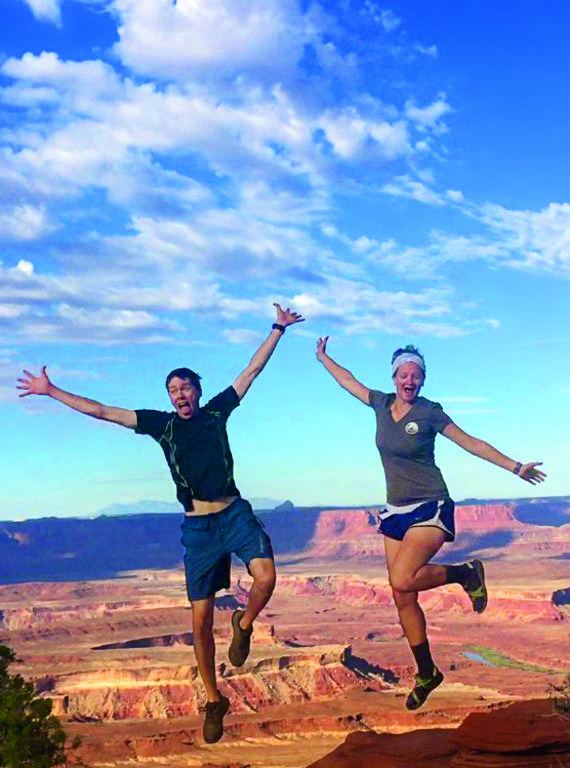 Cole and Elizabeth Donelson as they neared the end of a 32-mile backpacking trip in Bryce Canyon.

“What if we did them all in one year?” asked Elizabeth. Cole stopped. The idea seemed grand and preposterous. And intriguing. Within six months, the couple, both 24 at the time, decided to drop their budding careers and go for it.

“We realized that if we don’t do it now, we’ll really regret it,” Cole said. “And with the Park Service centennial, our timing couldn’t have been better.” For a year and a half, they each worked several jobs — Cole worked at a health care IT company, ran a home-efficiency business on the side and moonlighted for Uber while Elizabeth worked as a sixth-grade language arts teacher and sold crafts on Etsy. By August 2015, they had saved up more than $20,000 and departed in a Ford Escape with little more than some camping gear, outdoor clothes, backpacks and a cooler.

So far, the Donelsons have gazed over the desert and mountains from the top of 13,063-foot Wheeler Peak in Great Basin; performed the hokey pokey for their Samoan host family in American Samoa; hiked through moss-draped rainforests in Olympic; and camped everywhere from the dune fields of Colorado to Haleakalā’s crater in Hawaii.

You don’t have to have a trust fund to go on a year-long road trip, said Elizabeth, who, with Cole, has maintained a blog about their adventures. “It’s achievable for almost anybody.”

#{image.caption}
Sunset on the South Rim trail in the Chisos Mountains of Big Bend.   © JEREMY KLITZMAN

The Donelsons are part of a swell of adventurers who are visiting all 59 national parks in celebration of the Park Service’s 100th birthday this year. Two friends, Darius Nabors, 31, and Trevor Kemp, 32, kicked off a 59-week journey in Ohio’s Cuyahoga Valley National Park in July 2015. Jonathan Irish, 42, and Stefanie Payne, 36, a husband-and-wife photographer-and-writer team, departed from Washington, D.C., on Jan. 1 in a four-wheel-drive SUV with an Airstream in tow. Cees and Madison Hofman, newlywed Brigham Young University graduates, left Utah in a 1989 Toyota motor home in April and plan to finish in January. And Conor Knighton, a correspondent for “CBS Sunday Morning,” is producing “On the Trail,” a biweekly television segment on his adventures in all of the parks, from scuba diving in Biscayne to night hiking in Acadia National Park. 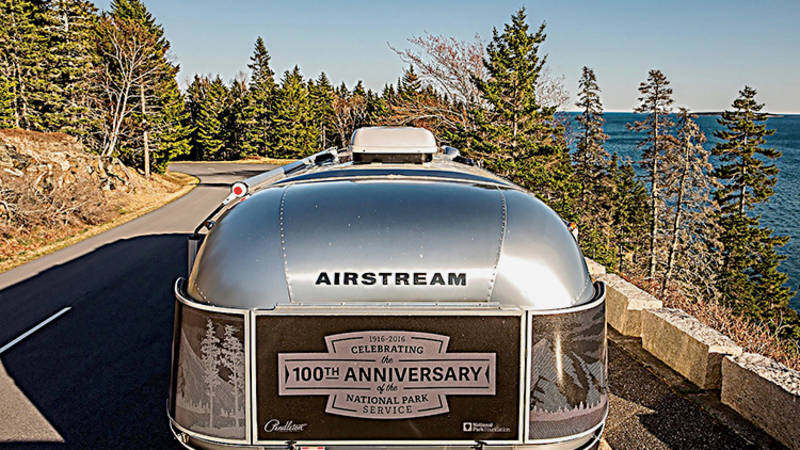 On the road in Acadia with Jonathan Irish and Stefanie Payne.

Some travelers have bitten off an even bigger mission: visiting all 412 national park sites. In April, Mikah Meyer, a 30-year-old lacrosse coach and choir director, started a three-year journey in a tricked-out van to honor his late father, who died of cancer before he’d had a chance to pursue all his post-retirement travel dreams.

Comprehensive statistics on people visiting all the parks are tricky to collect, but the National Park Travelers Club, which runs a forum for such enthusiasts, reports an uptick of trips among its members. Over its 15-year history, the organization has bestowed about 35 awards to those who have visited all of the park sites. This year alone, at least 10 more people are expected to snag the honor.

“It’s not just about the scenic grandeur but about exploring really interesting chapters of the American story and people,” said Roland Spies, president of the club, on the allure of the mission. “It’s a great way to be American — to connect with who we are and who we’ve been.”

Check out the road tripper’s blogs:

In interviews, travelers offered many similar explanations for undertaking their journeys: to have grand adventures, to see cool and beautiful things, to seize the moment and live a life without regrets. But adventures aren’t always easy. They are also feats of grit and endurance, and this year’s crop of park trippers has endured plenty of discomforts so far.

“We get sick of eating bananas every day,” said Elizabeth Donelson. “We’re in a tent. We’re sleeping on the ground, usually in a different place every night.” This spring, the Donelsons frequently slept in their clothes to stave off the chill of an unseasonably cool season in the Rocky Mountains. “It’s humbling,” said Cole. “We’ve worn the same clothes for more days than I care to admit.”

Nabors, a college fundraiser, and Kemp, an engineer, get demoralized camping in multiday downpours, have endured stomach aches and sustained injuries from running and hiking. In Arches, the Hofmans staved off an onslaught of enormous spiders that emerged during a storm. Meyer is concerned about enduring loneliness and travel fatigue. And Irish and Payne sometimes overdose on the “amazingness” of the parks and head to a movie theater for a break from the awe and wonder.

But perhaps the greatest hurdle is funding. Most travelers have saved up their own money, but they’ve also gathered corporate sponsors, crowd-funded and pursued more creative money-making schemes. Nabors, for example, won a $10,000 Bear Naked Granola Instagram contest with a photo of himself posing mostly naked with a bag of granola in Alaskan bear country. Meyer has agreed to emblazon his van with the logo of a candle company, which gives him a share of the proceeds from candles sold with his unique code.

To cope with the challenges of the road, many of the travelers have been in touch with each other, even meeting up in parks to swap stories and advice. Some have reached out to Chris Calvert, a paralegal from Washington, D.C., who finished visiting every national park site in 2013, when there were 401. (He is currently ticking off the newest additions.) And each has invented quirky traditions to break up the monotony of the road. Meyer sings at churches along his route. The Donelsons go to all-you-can-eat buffets and, after long backcountry hikes, consume an entire half-gallon of ice cream together. 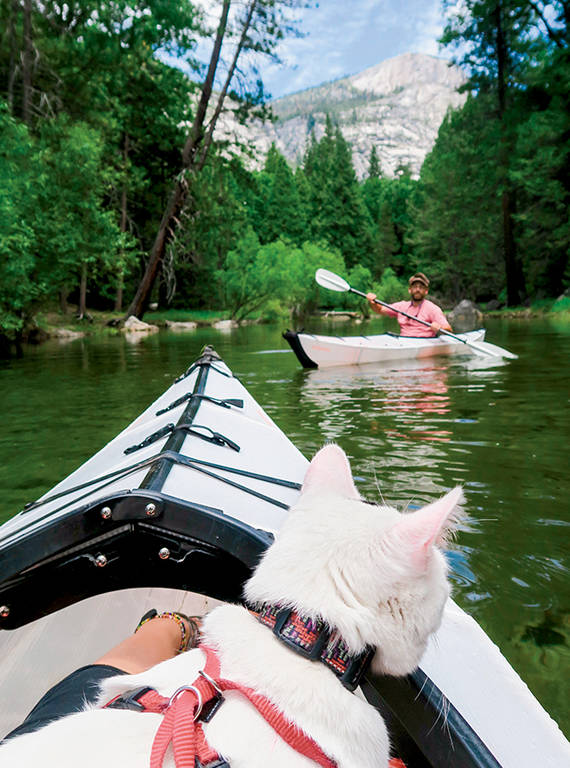 Cees and Madison Hofman take Vladimir the cat on a paddle on Mirror Lake in Yosemite.

Cees and Madison Hofman bring their cat, Vladimir, to every park, photographing him next to the welcome signs, taking him hiking on a leash and even outfitting him in a cat-sized harness and rappelling off cliffs. Nabors and Kemp try to hit a body of water in each park and complete every junior ranger program.

“I have more badges than will fit on one vest,” said Nabors, at least triple the age of most junior rangers. “Half of it is kind of funny, but you also get some good information about the park.” Nabors has become so accustomed to sleeping in a hammock that he insisted on sleeping outside during a recent family visit.

“That’s one of the things I’m surprised by — the amount I enjoy living out of a truck,” he said. “People say, ‘Isn’t it terrible not showering?’ I’m like, ‘No, not really, doesn’t really bother me.’ It’s freeing in that sense.”

The trip has also, he said, renewed his faith in humanity. Fellow park visitors are typically intrigued when they learn about his ambitious mission. Supporters — often strangers who have read about his quest — have sent Nabors letters, Halloween candy and donations. People have taken him out to dinner and become his pen pals, offering advice on their home parks.

“People are stoked,” said Cees Hofman. “They get so excited. One older man we met just couldn’t contain himself and gave both me and Madison huge hugs.” Photographer Jonathan Irish says people often ask him if he needs an assistant.

The support is motivating, but the true rewards, naturally, are the parks themselves. Nabors spoke reverently of walking alone through nine inches of fresh snow on Sentinel Dome in Yosemite and watching a bison shake off dust in the waning evening light in Theodore Roosevelt National Park. Cees Hofman has relished sunsets in desert parks — Arches, Canyonlands and Joshua Tree — where the light tints the rocks shades of bronze and terracotta.

“I feel like I create a little competition in my mind among the parks, but I am never disappointed,” said Hofman. “They’ve all been amazing.”

And Elizabeth Donelson recalled sitting on a beach near her campsite in Dry Tortugas National Park after the last ferry departed with day-tripping visitors.

“It was the absolute perfect temperature, the bluest water I’ve ever seen — like teal blue, like better than Hawaii — white sand, and it’s just a small beach with no one else there,” she said. “There were maybe 10 people on the entire island, and I had this feeling of complete peace, like this is what a national park is supposed to be.”

This article appeared in the Fall 2016 issue