By Jacob Baynham
Spring 2016: Snowed In

To reach Many Glacier Hotel in winter, you have to use your legs. A road will get you there, but it’s closed from November to April. So you hike—or snowshoe or ski—for seven windswept miles, along the frozen shore of Lake Sherburne and through the deserted entrance to Glacier National Park, where ropes clank against a naked flagpole and a bald eagle struggles to stay aloft in the wind. Keep going into the blowing snow until you see Swiftcurrent Lake and the angular wedge of Grinnell Point bearing down on it like the bow of an icebreaker. Here you will find Many Glacier Hotel, built 100 years ago in the style of a Swiss chalet. Nearby is an even older log cabin. And inside that cabin are David and Rebecca Wilson, a couple standing vigil over the hotel until spring.

One Saturday morning in December, David is reclining on the couch, watching The Hobbit on the cabin’s flat-screen TV. He’s 37, tall, with a beard and mussed brown hair—he looks like a young Jeff Daniels—and today he’s nursing a headache. He brews his own beer in the two-bedroom cabin, and he had a few of the rich, nutty porters last night. “It was Friday,” he explains.

David grew up with tools in his hand, helping his father build homes in Kentucky. He fell in love with Montana on his first visit and worked three summers in Glacier before he moved to Billings in 2011 to be a manager at a Wal-Mart. He lasted three years there and then signed on as the engineering manager at Many Glacier. Getting paid to work with his hands in a place this pretty felt almost too good to be true.

Rebecca sits across the wood stove on another couch. She’s a quiet 36-year-old with a homesteader’s hardiness and appetite for bad weather. It’s gusty and below freezing outside, but Rebecca’s ready for worse. “We want to see a really big snow,” she says a little wistfully.

The Wilsons work in Many Glacier year-round. In the summer, Rebecca is a barista in the hotel cafe while David manages the maintenance. For the rest of the year, David is employed as the official caretaker (and Rebecca is his unofficial helper). The hotel is open only from June to September, so the Wilsons spend far more time alone here than with people. This is their second winter on the grounds.

“For us, this is more normal than the season,” David says from the couch. “In the summer I feel like everyone is just visiting my little place out here.”

Still, it takes careful planning to feel any sense of belonging in a place where temperatures routinely plummet below zero, the snow is steady, and the wind is constant. In the fall, the Wilsons trawl the aisles of Costco, amassing thousands of dollarsʼ worth of groceries to last them from October to April. It’s like shopping for a fallout shelter—but with a few extra luxuries.

“You have to think of what you might crave later on,” David says. “If you want crab legs in December, you have to get them now.”

David and Rebecca Wilson are partly through their second winter as caretakers at Many Glacier Hotel. The long, cold season typically lasts from October to April.

COURTESY OF DAVID AND REBECCA WILSON

The cabin is filled with food. A giant box of powdered milk and two tubs of coconut oil sit on top of the fridge. The mudroom walls are lined with peanut butter, almond milk, and boxed wine. In the spare bedroom, plastic crates keep 50 pounds of basmati rice, 40 pounds of flour, and 25 pounds of lentils safe from the mice. Three freezers are stuffed with broccoli, spinach, and 15 pounds of bacon. A kitchen cupboard holds 25 pounds of Costco coffee. Bags of dried chilies occupy a wood table near the stove, beneath two shelves of seasonings. “The key to cooking here is spices,” David says. “Lots of spices.” 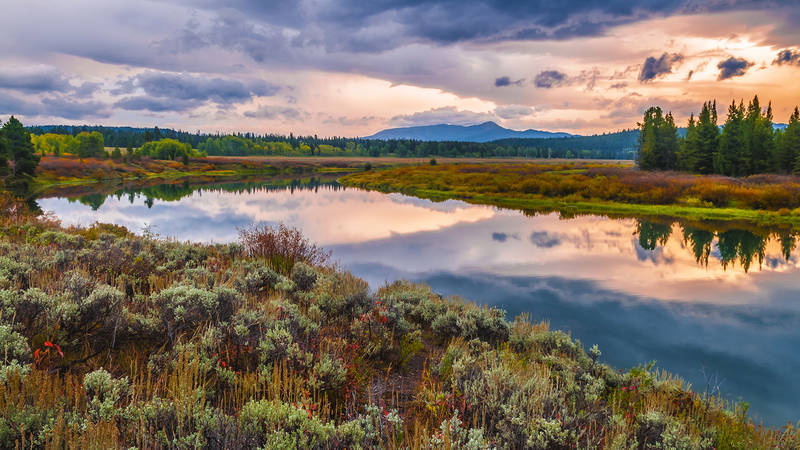 Glacier National Park preserves more than a million acres of forests, alpine meadows and lakes with habitat for a wide variety of plant and animal life.

Last winter they missed fresh vegetables, so this year they’re growing their own under fluorescent tube lights. The sprouts of kale, spinach, and chives look a little anemic, but the Wilsons are unfazed. “We might run out of some things, but we have enough to live on,” Rebecca says gamely.

To stay sane, they stay busy. David’s base is a heated shop in the hotel where he cuts glass for windows, threads pipes, and does woodwork. It’s 200 yards from the cabin, a commute he makes with ski goggles, a mountaineering jacket, and snowshoes. When he walks there today, snow whirls across the frozen lake in tiny tornadoes that sparkle in the sunlight. Behind them Mount Gould, Angel Wing, and Mount Grinnell are postcard-perfect ramparts of pine, rock, and ice. “These mountains don’t look real,” David says. He climbs over dune-like snowdrifts—in mid-winter they rise two stories or more—and navigates treacherous patches of ice. “You always have to be mindful,” he says. “If you slip and knock yourself out, who’s going to find you?”

David’s shop is den-like, lit by yellow bulbs. It had a window, but a few weeks ago, the wind was blowing snow through the sill and onto his computer, so he boarded it up. He’s building similar shutters for all of the hotel’s windows—160 so far. The wind is a relentless saboteur. It pushes open doors, punctures screens, and rips siding from the walls. David walks the perimeter daily to survey the damage. Inside the hotel, snow blows under doors and has to be swept off the carpet. Decks must be shoveled. The hotel is four stories high, with 215 rooms. “It’s like winterizing a small city,” David says.

Rebecca helps him as she can (she makes a lot of to-do lists), and David is glad for the company. Most people think of The Shining when they hear what the Wilsons do, and the hotel can get spooky. Rebecca once thought she saw David enter a room and then realized he was behind her. When David walks the long, unlit corridors of the hotel, he hears thumps, whistles, and creaks. “You can creep yourself out,” he says. “Being alone in a giant hotel in the middle of nowhere, your mind starts to work.”

Not everyone can handle it, according to the stories. A previous caretaker fled in mid-winter without any forewarning. He called his boss from civilization and said he wasn’t coming back. The isolation drove one couple to separate—the woman walked out, leaving her boyfriend to finish the winter there alone. Another couple didn’t speak for a month, sleeping in separate bedrooms until they finally reconciled.

The Wilsons can understand that. “Toward the end, you’re just waiting for the road to open,” Rebecca says. Last spring the plows cleared it in mid-April and the Wilsons were gone within half an hour, into Browning, where cars and people came as a shock. But they don’t think the job strains their relationship. “We like to spend a lot of time together,” Rebecca says. “We’ve always been that way.”

“We fight out here just as much as we do in town,” David adds. “And that’s not very much.” 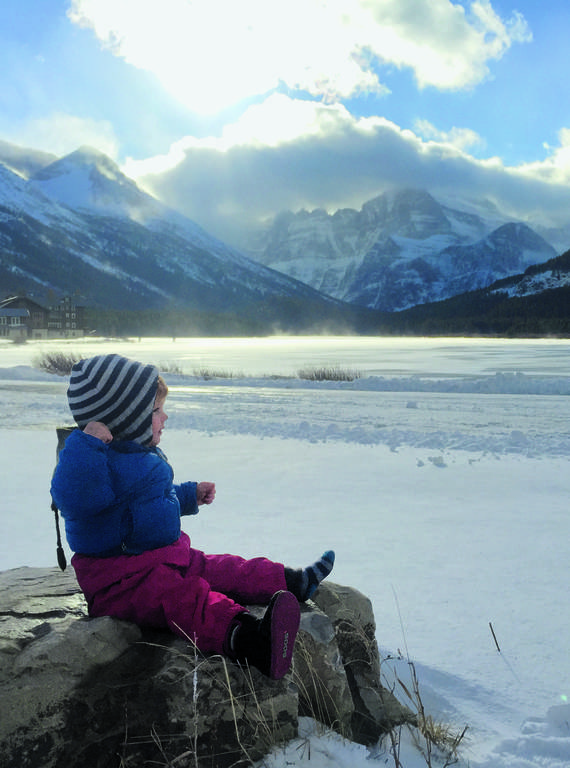 The author brought his wife and toddler with him on his reporting adventure. Halfway through their seven-mile trek to Many Glacier Hotel, they noticed that 1-year-old Theo had lost his boot.

Aside from the TV, they have a collection of books—Thoreau, Emerson, yes, even The Shining—and a German language audio tutorial. The cabin also has a slow Internet connection that allowed the Wilsons to keep a blog last winter. Their photographs and stories drew a loyal following of people who envied their solitude and the scenery in their backyard.

“They don’t realize what it would really be like, though,” David says. “You have to know how to fix things. If a water line breaks, what are you going to do? Just anyone couldn’t come in here and be comfortable.”

But even when things get tough for them—when pipes break and the snowdrifts block their back door—the Wilsons need only walk onto their porch to remember why they’re here. Stretching from their boots to the clouds is what George Bird Grinnell dubbed the “Crown of the Continent.” It’s a stark, ensnaring beauty, and all winter long the Wilsons share it only with the animals—bighorn sheep, coyotes, moose, grizzlies, and wolves.

“You get to see things people don’t usually see,” David says. “When you live here every day, it becomes the norm. But I could never get sick of this place.”

In Black and White