Denali National Park, one of three pilot parks participating in an initiative to significantly reduce waste.

NPCA is working to significantly reduce waste at our national parks, starting with three pilot parks: Denali, Grand Teton and Yosemite. Collectively, these three pilot parks welcomed nearly 8.3 million visitors in 2017, who left behind nearly 9 million pounds of waste that could otherwise be recycled or composted. That’s why NPCA is partnering with Subaru of America Inc., the National Park Service, park concessioners and surrounding communities to lead efforts to recycle, compost and reuse waste collected from parks to better protect the environment. 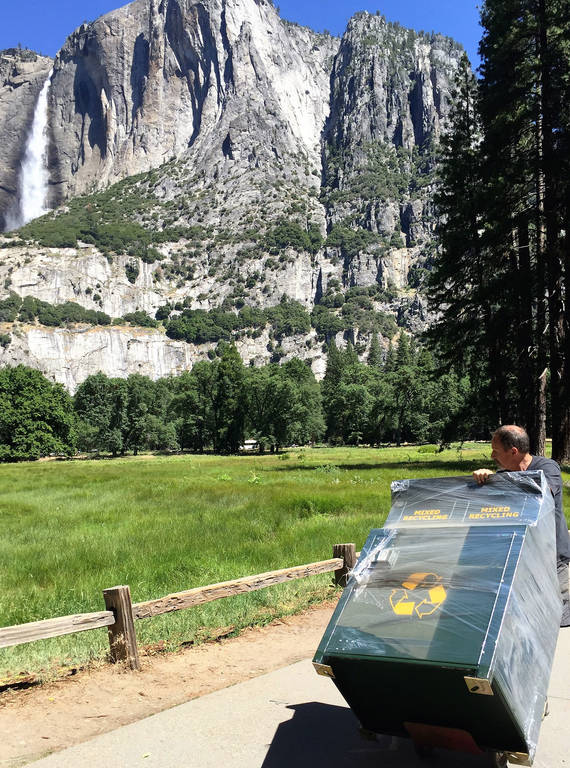 Staff install recycling bins at Yosemite as part of an innovative partnership to eliminate waste going to landfills at three pilot parks.

In 2017, the National Park Service managed nearly 70 million pounds of waste. That’s enough to fill the Washington Monument 250 times. If you include waste managed by park concessioners, the number is much higher.

In 2017, the three pilot parks – Denali, Grand Teton and Yosemite – and their concessioners reused, recycled or composted 4 million pounds of waste that was otherwise not sent to landfills.

Since the initiative launched in 2015, the pilot parks have collectively reduced the amount of waste going to landfills at Denali, Grand Teton and Yosemite by 32% — nearly 13 million pounds of trash. And there is much more to do.

The Solution: Visitors Play a Key Role in Reducing Waste at Our Parks

Visitors can play a big role in reducing park waste and should follow these simple steps when planning your park trip. Know before you go and:

1. Plan ahead and prepare. Think about what you bring into the parks. Check to see if it can be recycled or composted in the park you are visiting.

2. Opt for online when and where you can. Try smartphone apps to help navigate your way around the park, when access is available.

3. Mug for the parks. Bring a reusable coffee mug or buy one from the souvenir shop to help reduce waste at parks.

4. Bring your own water bottle. Bring a refillable water bottle or buy one at the souvenir shop while taking advantage of convenient water refilling stations located around the parks.

5. Choose reusable bags. Bring your own reusable bag for your supplies and souvenir items to help eliminate plastic bag waste.

A survey by NPCA’s corporate partner Subaru reveals that most Americans are unaware of the waste problem in our national parks. This infographic highlights some of the findings.

Choose carefully when purchasing souvenirs and supplies at the park. Look for materials that can be reused and take them with you. Avoid buying one-time use items and disposing of them while in the park.

Look for park signs and containers for collecting recycling, compost and waste to help you sort and keep unnecessary items out of the landfill.

Learn more by reading our survey results and following #dontfeedthelandfills.