Cubic feet of natural gas produced in North Dakota on a single day in early 2019, 20% of which was wasted through venting or flaring

Well sites approved in 2019 near the Little Missouri River

People visited the park in 2018, making it one of North Dakota’s top tourism destinations

A young Roosevelt visited the badlands of North Dakota and fell in love with the landscape. The badlands had such a profound impact on Roosevelt that he returned to the area to heal after the death of his wife and mother. Roosevelt immersed himself in frontier life and lived at his Elkhorn ranch on the banks of the Little Missouri River. Today, the park protects the Elkhorn ranch site and stands as a testament to America’s conservation legacy and the president who helped shape it.

The landscape holds the history of diverse cultures and remains important to Native American tribes today. Lands within the park are a part of the traditional bison hunting and eagle trapping grounds of the Hidatsa and Mandan tribes. The Arikara, Crow, Blackfeet, Gros Ventre, Chippewa, Cree, Sioux and Rocky Boy tribes are all associated with lands within the park. Each tribe has a unique history, spirituality and tradition with the badlands. The national park protects more than 70,000 acres of these sacred lands, iconic wildlife and unique rock structures. 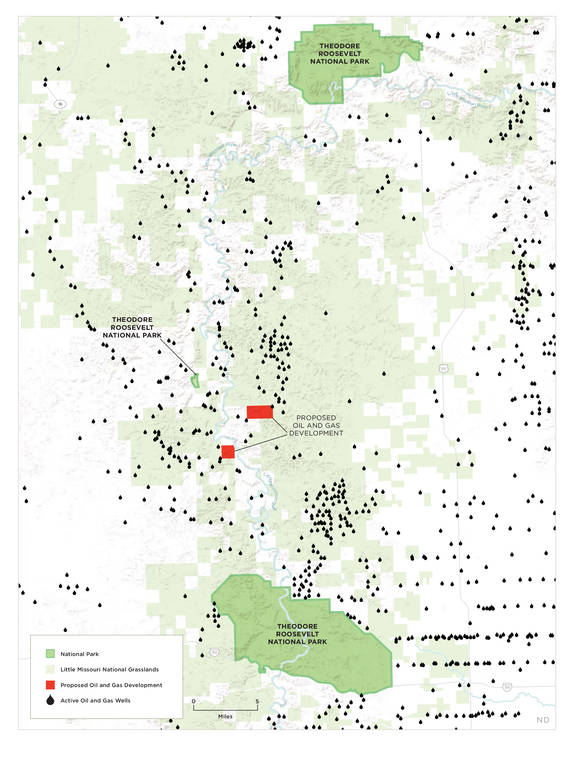 Theodore Roosevelt National Park sits atop the Bakken Formation, an enormous oil and gas reserve that has been developed since the 1950s. With the recent advent of hydraulic fracturing, or fracking, development began encroaching on the park.

To date, 90% of the Little Missouri National Grasslands, which fully surround the park, has already been leased for oil and gas development. This development has brought large infrastructure to the doorstep of the park and the communities nearby. In fact, there are many locations within the park where visitors can see the flares from nearby oil and gas operations.

We must act now to ensure this piece of American history is not completely consumed by the oil and gas boom.