Age in years of some of the archeological sites in Great Sand Dunes, some of the oldest in North America

Facebook Twitter
Almost half a million people travel to this park every year for its unique landscape. Those people spend $27 million annually in nearby communities.

Great Sand Dunes National Park and Preserve protects over 100,000 acres in the Sangre de Cristo mountains within the San Luis Valley of Colorado. It was originally designated a national monument in 1932 to protect its dunes from gold mining and sand extraction for cement, but for millennia before the designation, indigenous communities have viewed the sand dunes as a sacred place. The park contains the tallest dunes in North America at over 750 feet tall. The rugged mountain range provides a dramatic backdrop to the dunes with peaks soaring to over 14,000 feet.

Almost half a million people visit the dunes every year, an enormous number for a remote park, and an economic boon and anchor for the nearby communities such as Crestone, Westcliffe and Alamosa. In 2018 alone, visitors to the park spent over $27 million in nearby communities and supported nearly 400 jobs. 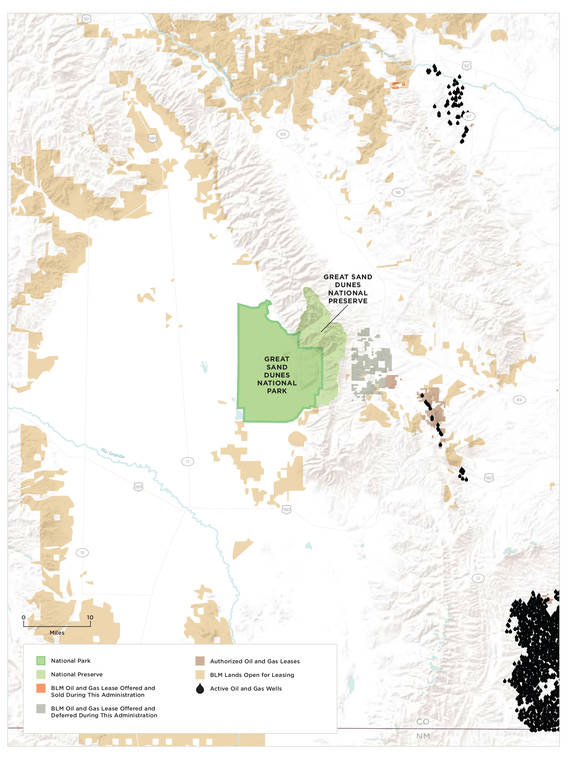 Without the proximity of the Great Sand Dunes, these towns would be left without a major economic engine.

In addition to the economic importance of the park to gateway communities, the San Luis Valley also is a gateway to the Old Spanish National Historical Trail, illustrative of the area’s diverse cultural heritage. The valley is also located at the uppermost terminus of a major wildlife corridor along the Upper Rio Grande river that stretches into New Mexico. The corridor is vital for elk, bighorn sheep, bobcat, black bear, mountain lions and the rare Rio Grande cutthroat trout.

In 2018, the BLM announced the sale of a series of lease parcels that covered more than 18,000 acres on the eastern side of the park boundary. Due to strong opposition from the local community and environmental groups, these leases were deferred by the BLM. However, since deferrals are only temporary and the BLM routinely reoffers deferred parcels for sale, it is very possible they will soon be offered again.