Percentage of the mule deer population lost since 1991

The record-breaking number of miles traveled by a mule deer that holds the record for the longest documented land migration in the lower 48 states.

Facebook Twitter
The Bureau of Land Management continues to lease hundreds of thousands of acres within and adjacent to migration corridors, putting the future of species that migrate from Grand Teton at a crossroads.

Grand Teton and Yellowstone National parks are both part of the Greater Yellowstone Ecosystem, comprising one of the largest intact temperate ecosystems left on Earth at nearly 18 million acres. This region is home to some of the most diverse and abundant wildlife populations in existence.

Grand Teton National Park provides refuge for many Northern Rockies species, but their territories don’t end at the park boundaries. In fact, species such as mule deer and pronghorn antelope travel many hundreds of miles each year to feeding and birthing grounds. 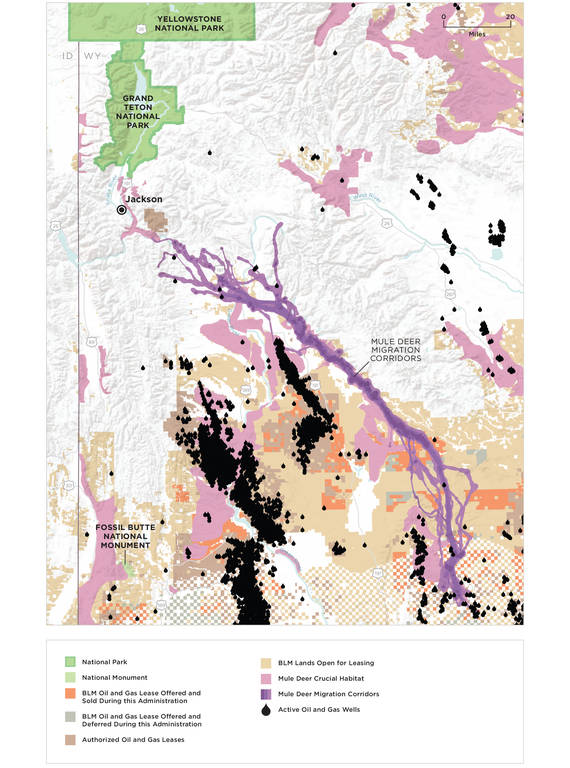 Over the past decade, there has been a striking decline in the mule deer population in Wyoming as a result of habitat loss associated with energy development. Current estimates show mule deer numbers 46 percent below the Wyoming Game and Fish Department’s recommendations for a healthy population.

In February 2018, then-Interior Secretary Ryan Zinke issued a secretarial order to “improve habitat quality and western big game winter range and migration corridors for antelope, elk and mule deer.” However, the administration continues to sacrifice wildlife migration in favor of oil and gas interests. An analysis conducted by the Center for Biological Diversity found that in 2018, the Department of the Interior offered 1.2 million acres of pronghorn and mule deer winter habitat and migration corridors in the state of Wyoming to oil and gas development.

The Trump administration is interpreting its own migration order to mean that they will only defer leasing on a parcel if 90 percent of it falls within a wildlife corridor, a number that is arbitrary and unsupported by science. Oil and gas development along wildlife corridors would be devastating for species. Often, once a species encounters new roadblocks within its path, it disrupts foraging and pushes animals out of important habitat and stop-over areas. In turn, this impacts the health of migrating animals, making it that much harder to reach their destination. If the level of development is significant, over time there is the risk that migration could be obstructed permanently.