The estimated number of Florida panthers still in existence

The weight of some of the "vibroseis” vehicles sent through sensitive wetlands to hunt for oil, cutting lines more than 15 feet wide and 2 feet deep in places

Facebook Twitter
Oil and gas exploration is destroying habitat inside Big Cypress National Preserve and is the single most damaging energy development threat within national park site boundaries. This harmful hunt for fossil fuels is taking place in primary habitat for one of the rarest and most endangered mammals in the world, the Florida panther, of which less than 230 remain. It is also critical habitat for more than 100 other threatened and endangered species, including plants and animals found nowhere else on earth like Everglades crabgrass, Florida bonneted bats and Big Cypress fox squirrels.

Encompassing 729,000 acres, Big Cypress National Preserve is a fundamental component of the Greater Everglades Ecosystem that includes, to its south and east respectively, Everglades and Biscayne National Parks. The Greater Everglades ecosystem provides drinking water to one-third of Floridians, vital waterflows to valuable estuaries and fisheries, irrigation for much of the state’s agriculture and has been the focus of billion-dollar restoration efforts for decades. These public conservation efforts, and the critical habitat they protect, are now at risk for private gain. 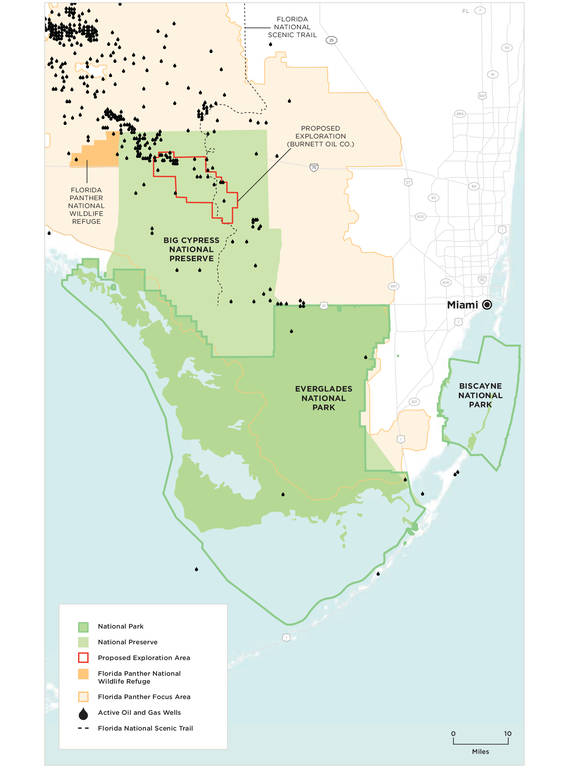 The enabling legislation for Big Cypress National Preserve assures the preservation, conservation, and protection of the natural, scenic, hydrologic, floral and faunal, and recreational values of the Big Cypress Watershed. It also includes language allowing for limited oil exploration and development. While the National Park Service has broad authority to reject oil and gas activities in order to conserve this protected area, it has failed to do so resulting in damaging new oil and gas exploration that involves driving 33-ton “vibroseis” vehicles and other equipment throughout wetlands in the preserve.

Since 2017, these machines have left an unsightly 112-mile long swath of destruction more than 15 feet wide and up to 2 feet deep in places. Cypress trees, including dwarf cypress that may have been more than 350 years old, are cut down to make way for these heavy machines that compact sensitive wetlands and alter natural hydrological flows. This is only the first of four proposed exploration phases, which could ultimately encompass approximately 360 square miles, or one-third, of the Preserve—an area larger than many national parks, including Shenandoah, Crater Lake, Biscayne and Zion.