A 40-year study follows the once-imperiled peregrine falcons of Alaska.

On a 70-degree day last July, wildlife biologist Skip Ambrose, a tall, fit 68-year-old with a neat crop of silver hair, sat in a boat in the Yukon River scanning cliffs with binoculars. Next to him, his wife, Chris Florian, an ornithologist, peered through a spotting scope. The couple, silent and focused, was looking for peregrine falcons, once rare but now plentiful in Yukon-Charley Rivers National Preserve, a 2.5-million-acre swath of muskeg bogs, cliffs, lakes, rivers, and forests in east central Alaska.

After hours of Zen-like patience, a call suddenly broke the stillness. Ambrose and Florian immediately turned to spot two falcons soaring overhead. Steadily moving their scopes, they tracked the birds back to an almost imperceptible nest hidden in the cliffs.

Ambrose and Florian were counting falcons for one of the longest-running bird studies in the country. After collecting preliminary data in 1973 and 1975, Ambrose began running twice-a-year surveys in 1977. He and a rotating cast of biologists have kept that schedule ever since, floating a 165-mile stretch of the Yukon River to survey peregrine falcons and hatchlings. 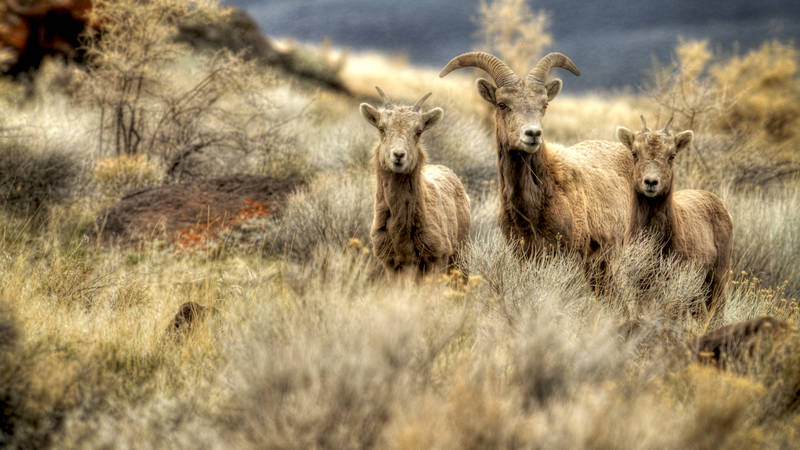 National parks provide critical habitat for a variety of animals—in some cases, they are the only places that threatened or endangered species have left to call home.

Research carried out for four decades is exceedingly rare—and valuable. The project captures the dramatic recovery of a wild population of falcons, from 11 pairs in 1973—down an estimated 80 percent due to pesticide spraying and other human activities—to more than 60 pairs in 2014. Even though Ambrose retired from the U.S. Fish and Wildlife Service in 2001, he and Florian still perform the surveys on their own dime.

“This 40-year recovery is really wonderful, but we think the next ten years might be even more interesting,” says Ambrose. “I’m shooting for fifty years, at least.”

As a species, peregrine falcons are both charismatic and embattled. Apex predators, they hunt from above, diving at an astounding 200 miles per hour. With intense eyes, a powerful beak, and sharp talons, they seem a symbol of fortitude. But falcons are also vulnerable. The pesticide DDT—which was introduced in the 1940s to combat human diseases and control pests in agriculture—accumulated in the bodies of falcons and other birds of prey, causing their eggshells to become thin and break prematurely. In 1970, the Fish and Wildlife Service listed the American peregrine falcon as endangered, and two years later the Environmental Protection Agency severely restricted the use of DDT.

By the late 1970s, peregrines began to stage a comeback.

“This is a shining example where we can say, ‘Look, the Endangered Species Act worked,’” says Melanie Flamme, a wildlife biologist for Yukon-Charley and Gates of the Arctic National Park and Preserve. “We made some changes in terms of how we were using DDT, and now we see a recovery.”

Peregrine falcons are the world’s most widespread bird of prey, living in ecosystems as diverse as Arctic tundra, sweltering desert, and even the skyscrapers of major cities.

Over the years, the nature of Ambrose’s research has changed. In the ’70s and ’80s, he and other biologists climbed up into nests to band and tag the birds, risking run-ins with parents that would defend themselves by raking the researchers’ heads with talons. “I started wearing climbing helmets, and not because the climbing is dangerous,” says Ambrose. The bands and radio transmitters helped scientists learn where the birds flew for the winter (to locations scattered between the southern United States and Argentina) and how long they live (on average, seven years but as many as 17). Ambrose and his team also collected the remains of prey birds—disembodied beaks, legs, and feathers—strewn about nests, and discovered that Alaska’s falcons dine on about 100 different species of birds.

Now, since Ambrose and his team have many of the answers they were looking for, they simply count falcons and hatchlings and make observations, but that doesn’t mean they don’t make new discoveries. Recently, they have noticed behavior they’d never seen before: Falcons are so abundant that they sometimes fight over territory by striking each other in mid-air.

After he retired, Ambrose also trained the next generation of biologists at Yukon-Charley, including Melanie Flamme. The two continue to compare notes as Flamme manages a team that also runs surveys of falcons. Because they are a keystone species, peregrine falcons serve as a long-term vital sign that helps biologists monitor the overall health of the ecosystem and detect trends, including levels of contaminants. (DDT levels have dropped but not disappeared, in part because some South American countries continue to allow the pesticide.) The researchers’ observations are helping the National Park Service manage the species as the population grows. The birds are now doing well enough that the Alaska Department of Fish and Game will soon allow falconers to capture a limited number of young birds from the upper Yukon River area for hunting. (Falconry is permitted in most of Alaska, but Ambrose opposes this new development because it complicates his long-term monitoring efforts.)

In 1999, peregrine falcons were taken off the Endangered Species list, but they still face threats. Mercury, released with the burning of fossil fuels, continues to accumulate in the atmosphere and in falcons’ bodies. And peregrine falcon populations could dwindle in response to climate change, diminishing winter habitat, and a plummeting supply of prey birds. Ambrose plans to continue conducting research, and the Park Service has funding to continue its own surveys for years to come.

“People ask, ‘How can you do that for 40 years?’” says Ambrose. “And I say I’ve just never gotten tired of it. You get to know these birds. It’s a real personal thing. They’re not your friends or your pets, but they know me, and it’s always a thrill to see them.”