What are the ingredients for a successful restoration event?

Ours started with volunteers from the National Parks Conservation Association (NPCA), National Park Service (NPS), Bureau of Land Management (BLM), Student Conservation Association (SCA), and U.S. Marines from the Twentynine Palms Air Ground Combat Center, with generous support from Nature Valley. We added rakes, shovels, strong backs, fresh air, cold drinks, a desire to help the planet, and a good helping of humor. The result was a fun Saturday for us, and long-term habitat improvements for the wildlife at Joshua Tree, including the endangered desert tortoise.

The restoration event occurred on Saturday, April 14, 2012. Thirty volunteers teamed up to restore public lands in an area known as the “Saddle,” just south of the city of Twentynine Palms in the California desert. The Marines, BLM, NPS, and NPCA staff reclaimed lands that were damaged by off-road vehicles to better protect desert tortoise habitat and “wildlife corridors”—places where animals move between different habitat areas. 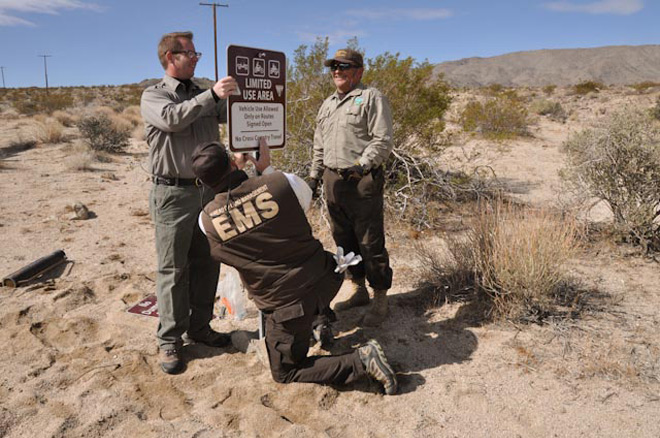 The Saddle’s spectacular desert lands were once part of Joshua Tree National Monument, land later designated as Joshua Tree National Park, then removed for mineral exploration in the 1950s. The BLM currently manages the area. The majority is designated as the Pinto Mountains Desert Wildlife Management Area and serves as critical desert tortoise habitat. We didn’t come across any tortoises on this particular day, but it was easy to see how tortoises could move and burrow in the sandy desert soils of this area.

The Saddle is also known wildlife habitat for a number of other species based on studies conducted by the South Coast Wildlands, a non-profit environmental organization that has identified five distinct wildlife corridors, in this area. The Saddle also has federally designated wilderness and culturally significant mining sites that are remnants from when this was a thriving mining community.

After several hours of work, the Marines, BLM, and NPS staff enjoyed lunch and listened to an interpretive program about the desert tortoise, an iconic and threatened species.

“This event was a great opportunity to connect communities with our public lands,” said Tim Williamson, wilderness manager for the Barstow Bureau of Land Management.  “Our partnership is a great reminder that we need to work together to protect special places in the California desert.”