Several times a week, Betty Reid Soskin packs the theater at the Rosie the Riveter/World War II Home Front National Historical Park. Trim and nimble, perched on a stool, the 94-year-old is a star attraction of this urban park in Richmond, California. After showing a short film about the city during the wartime boom, Soskin, who has a ballerina’s erect bearing, spoke for more than 40 minutes without notes on a recent afternoon. 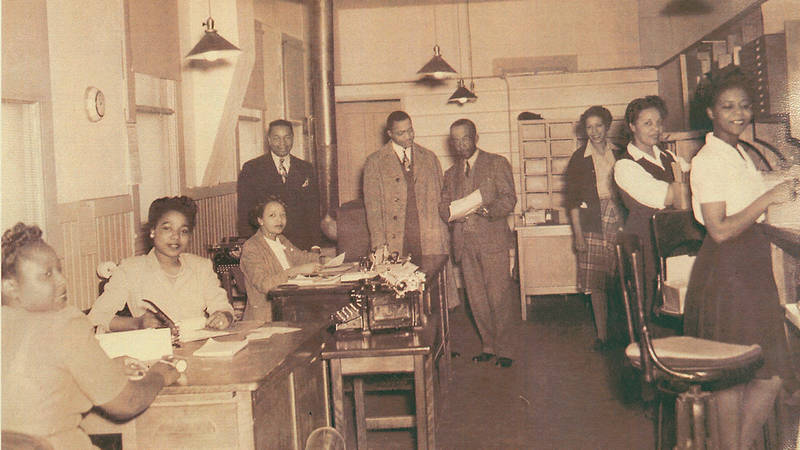 The Richmond office of the Boilermakers, a shipyard labor union that employed Soskin as a clerk in 1942.

In 1942, she worked as a file clerk in the auxiliary of the Boilermakers, a shipyard labor union, she told the spellbound audience. Despite the Home Front campaign to unite Americans against the enemy, the union was segregated in the era of Jim Crow laws and blacks were frequently slotted into more menial jobs.

“If you’d asked me, I would have told you all the shipyard workers were black,” said Soskin, showing flashes of wry humor but choosing her words with the precision of a judge.

Rosie the Riveter has become a symbol of American women entering the workforce and breaking social taboos. But it’s largely the story of white women, explained Soskin, because black women have worked outside of the home since the days of slavery.

She also connected history to the present day, mentioning police shootings and hate crimes that have dominated the news. She ticked them off: “I can’t breathe. Hands up, don’t shoot. Charleston, South Carolina.”

Despite their flawed social system, Americans fought off fascism, Soskin said. And now, despite their flawed social system, Americans will have to fight rising sea levels, global warming, and racial inequality. After she finished her talk, groupies descended to snap selfies with Soskin, who warmly, patiently answered questions for another half hour.

“Thank you for telling the truth,” a fan told her.

“I’m going to bring my children and grandchildren here,” another woman said. 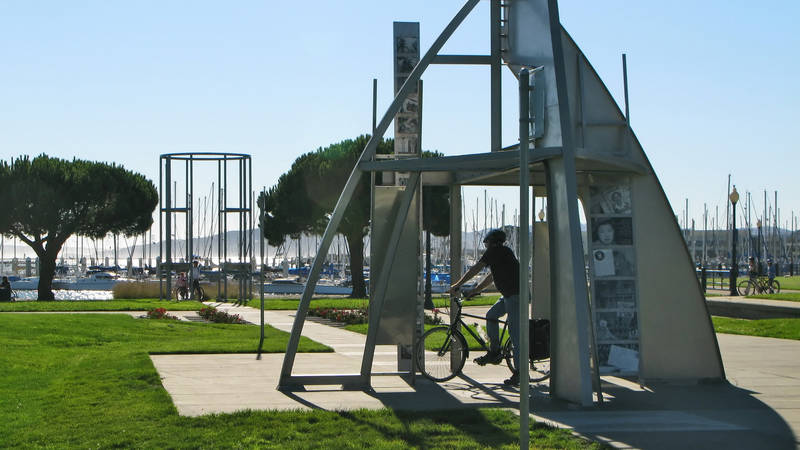 It’s just another Saturday for Soskin, who holds the distinction of being the oldest ranger in the National Park System. She never formally trained for the job, but she helped shape this historical park on the San Francisco Bay and by her own account, when she gets in the theater, “something magical happens.” The power of her story—the great-granddaughter of a slave, she has borne witness to many of the major social movements of the last century—helps account for the overflow crowds she routinely attracts and her recent turn as a media sensation, with interviews on NPR’s Tell Me More, NBC’s Today Show, and KQED’s Forum radio program. A caller to that show, which airs on the San Francisco NPR affiliate, choked up while talking to Soskin. “I’m so happy to learn from you,” she said. “You are elderly and yet contemporary and evolving in your views. I would like to be like you.”

People are intrigued by her age, said Tom Leatherman, an acting deputy regional director at the National Park Service. “But when they meet Betty, it’s about what she’s able to do. The minute people hear her story, they want more. She speaks from the heart, and nothing can be more powerful.”

Soskin became a ranger in 2007, late in a long, remarkable life that began in 1921, in Detroit. Later, her family returned to Louisiana to their Cajun and Creole clans, and when she was 6, they moved to Oakland, joining her maternal grandfather. A waiter at the Oakland Athletic Club, he became her best friend, telling her stories while they gardened about the people left behind in Louisiana, including her great-grandmother, Leontine Breaux Allen, who lived to 102.

“My great-grandmother, I knew her well, but I didn’t meet her until I was a teenager,” Soskin said in an interview after her talk. “She was a part of every conversation. She was present in my life.” 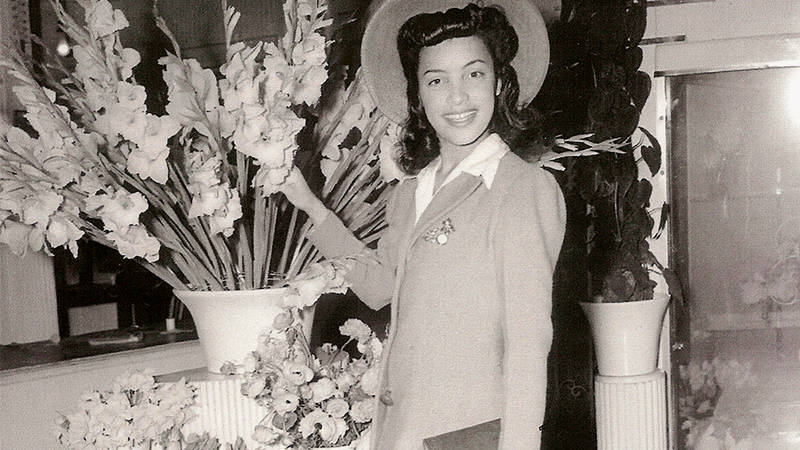 Soskin in a photo from 1942, choosing flowers for her wedding to her first husband, Mel Reid.

Frustrated by segregation and racism during World War II, Soskin and her first husband, Mel Reid, decided to start their own business, according to her oral history collected by the University of California, Berkeley. Their “crazy little record shop” got its start out of the garage in their duplex. “I sold records through a window cut into a garage wall,” she said. Customers lined up to buy blues albums such as Wynonie Harris’ risqué “Around the Clock.”

“People couldn’t even find the place because it was so tiny … but they would circle the block until they found it,” Soskin recounted. Her youngest son, David, still runs the shop, which now specializes in gospel music.

In 1952, they moved to Walnut Creek, a suburb east of San Francisco, where they were the first black family in the area. Neighbors threatened them and their architect, warning that the lumber for the home would be set afire. When the local elementary school that her son Rick attended held a minstrel show, she complained to the principal. He argued, “What we are doing is we are showing black people or colored people as happy-go-lucky and—”

“Do I look happy-go-lucky to you?” Soskin asked.

In her mid-30s, she suffered a mental breakdown. The racism that tainted her everyday life was a factor. Also, her husband worked long hours at their shop and their marriage fell apart, leaving her to raise her three sons and developmentally disabled daughter on her own. To heal, she visited a psychiatrist and taught herself how to play the guitar. Music gave her an escape. “It was impossible to take flight except within myself,” she said.

Later, she became active in a progressive Unitarian group and connected to members of the Black Power movement. “I was a bag lady for the Black Panthers,” Soskin said with a smile. She collected and delivered money to leaders Kathleen Neal and Eldridge Cleaver, benefiting from her status as a middle-class African-American housewife.

“No one was going to hand power to a guy standing on the corner with a brick in his hand,” she recalled in her oral history. “But I was choking on power. I could’ve parked my car in the middle of City Hall lawn and nobody would say anything, because I … had a strong liberal community supporting me.” In 1972, she was elected to serve as a George McGovern delegate to the Democratic National Convention in Miami, a sign of how much residents had come to accept her.

With her children away at school and out of the house, she started working on a project to develop drug prevention programs for teenagers, where she met Bill Soskin, a prominent social psychologist at UC Berkeley. She married Soskin and joined a social circle involved in poetry and the counterculture’s human potential movement made famous at Esalen Institute in Big Sur.

When her first husband’s health began failing in the late 1970s, she ran Reid’s Records on what had become a blighted stretch of Sacramento Street in Berkeley. Determined to use the shop as a vehicle for social change, she tapped into the access to city leaders she had as a faculty wife. She became an aide to Berkeley councilman Don Jelinek and persuaded the city to build low-income housing across the street from the record shop, replacing a crack house and helping change the climate of the community.

In 1987, the three men who helped shape her identity—her father and her two husbands—died within three months of each other. “After being lots of Betties, I had to reinvent myself again,” she said. She continued working with local politicians, focusing on the developmentally disabled, underserved, and low-income communities—“any field that had relevance to the African-American story”—and eventually, she became a field representative for state assemblywoman Dion Aroner. In that capacity, she joined the planning process for the Rosie the Riveter park site in Richmond, where the population nearly quadrupled to 100,000 during WWII, with workers arriving from across the country to build battleships and manufacture Army Jeeps.

At the early meetings, she was the only person who recognized the historical sites as sites of segregation. “What gets remembered is a function of who’s in the room doing the remembering,” Soskin said.

The park, which opened in 2000, at first offered bus tours of the Rosie the Riveter monument and various historical sites. The visitor center opened in 2012.

When Soskin started giving ranger speeches, she would nervously call her cousin, Jesse Douglas Allen-Taylor, late the night before. She was worried people wouldn’t think her stories were important, but Soskin has a gift for providing context about economic conditions, social migrations, and other historical events, said Allen-Taylor, 67. “It allows you to understand all the things that were going on at the time as opposed to simply what she was doing. It gives you, the viewer, access to that, and then you can begin to see yourself there.”

In 2009, Soskin attended the inauguration of President Barack Obama. She sat in the shadow of the Lincoln Memorial, and in her pocket, she carried a picture of her beloved great-grandmother. So much history, so much change in just four generations. “That’s how fast the time goes,” she said.

In late spring of this year, Soskin fell and woke up in an ambulance. Though she still suffers occasional vertigo, she returned after two weeks to the visitor center in the former oil house of the Ford Assembly Plant. Just outside, sunshine glitters on the water, gulls wheel overhead, and tugboats chug past the SS Red Oak Victory ship.

Soskin is very clear that she has no intention of slowing down. “I’m aware of being in my last decade,” she said. “I’m working against the clock. There’s a sense of urgency.”