Landscapes for the People

By Ren and Helen Davis
Fall 2015: Landscapes for the People

Photographer George Grant has never been widely known, but his skillfully crafted work helped popularize the idea that the national parks belong to everyday Americans.

In a conference room at the Saint Michaels, Maryland, public library, Mary Grant McMullen slowly removed an object from a brown paper wrapper. “This belonged to my uncle George,” she said, pulling out a gasoline-station map of the United States, yellowed with age and mounted on cardboard. On the map, George Alexander Grant, the first chief photographer of the National Park Service, had carefully traced the routes of his automobile travels between 1929 and 1962. In the border, below the thicket of tangled black lines, Grant had penned a quote from a Joseph Conrad essay: “Of all the sciences, geography finds its origin in action, and, what is more, in adventurous action.”

The old map is tangible evidence of the insatiable curiosity and thirst for adventure that consumed much of Grant’s adult life. During his quarter-century as the national parks’ principal staff photographer, he crisscrossed the country numerous times, traveling more than 140,000 miles to capture more than 30,000 images from nearly all the national parks, monuments, and historic sites that existed at the time. His virtuosic photographs appeared in publications around the world, graced the walls of congressional offices, and encouraged countless visitors to explore the parks.

F15 - Landscapes for the People - George Grant in Uniform 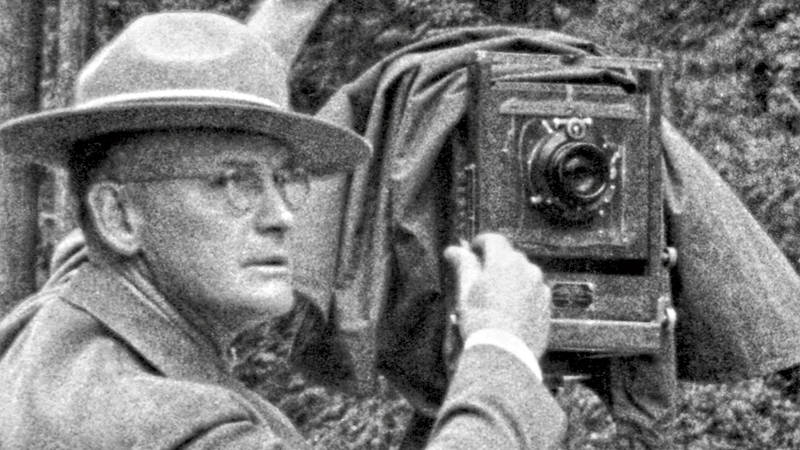 An undated photograph of George Grant in his Park Service uniform.

But nearly all of Grant’s images were credited simply “National Park Service.” For decades, he has been all but unknown outside the agency.

During a 2006 visit to the Park Service photographic archives to research a book about the Civilian Conservation Corps—a New Deal initiative—we came across several remarkable photographs of program enrollees in national parks. Struck by the artistry, we wondered if they were Ansel Adams images, but an archivist corrected us, explaining that Grant was the photographer. How was it possible that the author of these indelible photos and many thousands of others was completely unfamiliar to us? Fascinated, we set out soon after on a long journey to find out all we could about this unsung chronicler of the parks and the legacy he left behind.

Grant was born in Milton, Pennsylvania, in 1891 and moved to nearby Sunbury soon after. Even then, he was a dreamer and an observer, a child who loved to watch trains roll through his town and boats travel along the Susquehanna River to faraway destinations. After high school and a series of factory jobs, he worked as a metalwork craftsman at the Roycroft Community in New York, a center of the early 20th-century Arts and Crafts movement. There, he began to develop the technical skills and artistic sensibility that would later define his photography.

After America’s entry into the Great War in 1917, Grant enlisted in the Army and was stationed at Fort Russell, Wyoming, for artillery training. In the West for the first time, he fell in love with the country’s grand landscapes. He returned home at the war’s end, but the experience transformed him; he vowed to go back West someday.

In 1921, Grant wrote a letter to the chief ranger at Yellowstone National Park asking about possible employment. “I am sick and tired of inside work, of factories and industrial communities in general … and almost wept when we left Cheyenne,” he said. Nothing came of his query, but Grant was undeterred. He continued dashing off letters, and the following year, after one of his missives finally landed on the right desk, he was hired for a seasonal position at Yellowstone. Soon, Grant was balancing clerical and ranger duties with photography, snapping pictures when he could and spending evenings in the darkroom.

At the season’s end, the superintendent, Horace Albright, offered him a coveted permanent ranger position, but Grant turned it down. He was concerned about the dearth of photographic work in the winter, and a backcountry horseback accident had convinced him that he was not suited for the job’s physical demands. Reluctantly, Grant wrote a resignation letter, closing with his hope that one day, the Park Service budget would “go so far as to support a photographer, a profession that I have fully made up my mind to master.” Unmentioned in his correspondence was that a broken heart from a failed summer romance may have played a part in his decision to leave.

Grant moved on. He briefly studied photography in New York City, then accepted a position as a photographer for Pennsylvania State University. But he continued a steady correspondence with Albright, and finally, in 1929, his persistence paid off, and he was appointed the first staff photographer for the Park Service.

The first field season set a pattern that Grant would follow for most of the next decade. Loading a Park Service vehicle with camping gear and photography equipment (he would later name his assigned truck “the Hearse”), he set out on a 4,000-mile trip to visit 13 Southwestern parks, from the Grand Canyon to Zion. At each stop, Grant would meet park staff, then travel—by automobile or sometimes on horseback—to photo locations. For most of his assignments, Grant preferred a 5x7-inch view camera with heavy tripod and sheet film; for more remote destinations requiring foot or horse travel, he often would pack a 120-roll film camera and lightweight tripod. His truck doubled as a rolling darkroom, where Grant spent countless evenings mixing chemicals and processing film from each day’s shoot.

Impressed with his work, Grant’s boss asked him to participate in the first Park Naturalists Conference in 1929. At his presentation on the principles of photography, Grant told the audience: “You fellows are living in the most beautiful parts of the country. You have pictures almost anywhere you look. If you haven’t already adopted photography as a hobby it is because there must be a screw loose somewhere.”

President Franklin D. Roosevelt’s New Deal initiatives to aid the nation’s recovery from the Great Depression had a profound effect on Grant’s work. In the 1930s, Roosevelt nearly doubled the size of the National Park System—adding national monuments, historic sites, and military parks—and created the popular Civilian Conservation Corps program to put men to work in forestry, erosion control, and other park projects. Grant, who had been promoted to chief photographer, was heavily involved during this golden age for parks, documenting Conservation Corps activities and providing thousands of images of new and existing sites.

Through the decade, Grant’s schedule revolved around winter laboratory tasks at the agency’s Washington headquarters, summer travel in the West, periodic assignments in the East, and occasional participation in survey expeditions to planned or proposed national parks. Among these were visits to the Great Smoky Mountains (1931); the Natchez Trace Parkway (1934); Washington’s Olympic Mountains (1934) and North Cascades (1938); southern Arizona and Sonora, Mexico (1935); Big Bend in Texas (1936); and the Oregon coast (1938).

Grant’s last major assignment came in 1948, when he joined teams of archaeologists and historians from the Park Service and the Smithsonian Institution on the Missouri River Basin Project. Tasked with collecting artifacts and documenting sites before inundation by waters from irrigation dams then under construction, Grant spent months at a time in the field and darkroom. Each year, the budget for this work was reduced, however, and in 1954, his position was eliminated. For Grant, it was disappointing yet not wholly unexpected that his career with the Park Service was over. He traveled east to live with his brother in Maryland before returning to Santa Fe at the invitation of a former Park Service colleague. Suffering from chronic respiratory illness, possibly from a lifetime of smoking and exposure to photography chemicals, he died in Baltimore in October 1964.

We are not the only ones who have mistaken Grant’s photographs for work by Ansel Adams. Comparisons are almost inevitable given that they often photographed the same subjects in a similar style. Both considered themselves “straight” photographers who sought to capture a subject’s natural beauty in sharp focus and vivid detail. But while Adams is most renowned for his pristine, empty landscapes, Grant’s assignments called for both scenic images and pictures depicting people at play in the outdoors. These photographs, capturing subjects from horseback parties in Yellowstone to campers near Mount Rainier and guided tours at Mesa Verde, were visual invitations to all Americans to explore and enjoy their national parks. The pictures reflect the simple pleasure and, at times, awe of visitors and were approachable enough to give viewers the idea that they could head out to the wild and produce similar images armed with their own Kodak Brownies or other inexpensive cameras.

As the Park Service nears its centennial, Grant’s photographs haven’t lost their relevance. They inspire wonder, still, and they offer a glimpse back to an important moment when national parks were shedding their image as remote enclaves available only to those with time and money and were truly becoming landscapes for the people.

The National Park Next Door