Some national parks are celebrated for their vast landscapes, but these 10 sites share enormous stories and achievements in suprisingly small spaces.

Here are the teeniest spots, from largest to smallest.*

They command the attention of millions and spearhead initiatives that shape our culture, yet for years, no comprehensive resource documented and interpreted the lives of America’s first ladies. Recognizing this need, enthusiast Mary Regula, wife of a former Ohio congressman, helped establish a bibliography on these public figures. Her efforts led to a National First Ladies Library in 1996, and in 2000, Congress designated this historic site — one of only a handful of national parks devoted specifically to interpreting women’s history. Though the site preserves the childhood home of one individual woman — First Lady Ida Saxton McKinley — it also archives a wealth of information on the diverse lives of dozens of influential women who served in this rare and distinctive role in American politics and culture.

Manhattan residents are known for making the most of small spaces; still, the amount of history that took place in less than half an acre at this Wall Street location is staggering. The original Federal Hall, built in 1700, served as the administrative offices for the city, the site of George Washington’s presidential inauguration and the first U.S. capitol building. After the seat of federal power moved to Philadelphia in 1790, the original building was eventually razed, and a second building was completed at the same site in 1842. This newer facility became the nation’s first customs house, as well as one of six federal treasury buildings storing millions of dollars’ worth of precious metals between 1862 and 1920. The memorial now houses a museum on Washington’s administration, including the original Bible from his inauguration.

Prior to the Revolutionary War, New York City was one of the largest slaveholding regions in the country, and the labor of enslaved people contributed significantly to the city’s growth. In 1991, workers in lower Manhattan stumbled on a piece of this often-overlooked history when they found this burial ground while excavating a federal office building. The site contains the remains of more than 400 Africans and African Americans, both enslaved and free, who were buried here from the late 1600s until the late 1700s. The monument, a National Historic Landmark, now contains four exhibit areas within its interpretive center to help commemorate the lives of Africans and African Americans in colonial New York. The monument design is heavily influenced by African motifs, including an outdoor area known as the “Circle of Diaspora,” decorated with symbols from different cultures throughout Africa, Latin America and the Caribbean.

National Woman’s Party founder Alice Paul in 1920 celebrating the ratification of the 19th Amendment, which prevents voter discrimination on the basis of sex.

This site preserves the former home of suffragist Alice Paul and the headquarters for the National Woman’s Party she founded in 1916. Paul and other outspoken activists worked passionately for decades — enduring hunger strikes and routine mocking and assaults from men who opposed them — ultimately resulting in numerous victories for women. The group helped to pass hundreds of pieces of legislation, including, most notably, the 19th Amendment, which gave women in every U.S. state the right to vote (though many African American women remained unable to vote until the passage of the 1965 Voting Rights Act). The site became a center for feminist education and social change, and the monument now includes a museum with some of the best resources on women’s suffrage in the country.

History buffs will not want to miss a tour of the fateful theater where Confederate sympathizer John Wilkes Booth assassinated 16th President Abraham Lincoln just five days after General Robert E. Lee surrendered in April 1865, effectively ending the Civil War. The site includes the compact performance space where the president and First Lady Mary Todd Lincoln watched a production of “Our American Cousin” from a box above the proscenium arch. Beneath the theater, a basement museum now houses artifacts from the event, including the president’s greatcoat, the assassin’s diary and the actual .44-caliber Derringer from the fatal attack. Across the street, visitors can also explore the home of the German tailor William A. Petersen, where Lincoln was carried after the shooting and was tended to until his death hours later.

Carter G. Woodson in the library of his Washington, D.C., home, which is now a national park site.

Known as the Father of Black History, Carter G. Woodson was a scholar, author, educator and journalist who dedicated his life to documenting and promoting stories of the African American experience. He earned his doctorate from Harvard University while teaching at public schools and went on to serve as the dean of the School of Arts and Sciences at Howard University. In 1926, he founded “Negro History Week,” a celebration of African American achievement that eventually went on to become Black History Month. The historic site, recently renovated and opened for the first time to the public in 2018, preserves the residence where Woodson spent the last 28 years of his life. His home also served as the headquarters for the organization he founded to promote scholarly work in African American history, which continues today (in a separate location) as the Association for the Study of African American Life and History. Note that the site is currently closed for renovations and slated to reopen in 2023; when open, tours must be arranged in advance on the park’s website. 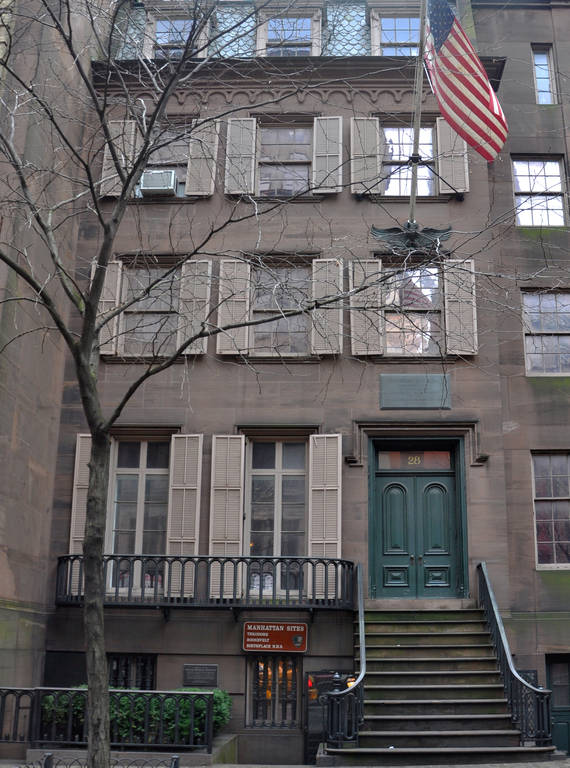 President Theodore Roosevelt was a complicated figure and an outspoken conservationist, known for his passion for the West and for ranching in the wild lands of North Dakota. Yet the future president spent his early years in a much different East Coast environment — the heart of America’s largest city — suffering from debilitating asthma and illness. This rebuilt home is modeled after the brownstone in downtown Manhattan where Roosevelt spent the first 14 years of his life and where he developed a personal fitness regimen that would ultimately create lasting improvements in his health and his outlook. The site contains five rooms decorated as they looked in Roosevelt’s time, as well as two museum galleries and a bookstore.

The building where one of America’s 35th president began his life was not only tiny but also modest. Eight people shared the home with its small but comfortably furnished rooms and its single bathroom. John F. Kennedy was born in the master bedroom and spent the first three years of his life here with his parents, three siblings and two live-in domestic workers. Tours and interpretation at the site focus on the day-to-day life in the household, from the simple details such as favorite books and meals, to the rituals that shaped the psyche of the future president and his siblings, including their mother’s theory of “scientific motherhood” and the quizzes both parents would devise at the dinner table to encourage curiosity and learning. Note: The site has limited hours and closes during the winter months.

Educator and political leader Mary McLeod Bethune was born a decade after the end of the Civil War to parents who had been enslaved; she grew up in South Carolina as the 15th of 17 children. Despite a childhood of poverty and hard work, she walked for miles each day to attend the one-room schoolhouse established for African American children in her community and became the only child in her family to receive an education. She began working as a teacher, eventually founding a school for African American girls in Daytona, Florida, and serving as president of the National Association of Colored Women. In 1935, she became an advisor to President Franklin D. Roosevelt and founded her own civil rights organization, the National Council of Negro Women. This historic site preserves the former headquarters of her organization along with details of her extraordinary life and achievements. Note that the site has limited hours and restrictions on the maximum number of visitors.

The memorial honoring freedom fighter and engineer Thaddeus (aka Tadeusz) Kościuszko may be the smallest national park site in the country, but it preserves epic tales of war and freedom. Polish-born Kościuszko helped American colonists win their independence from Britain in the Revolutionary War by meticulously designing and fortifying their military defenses. After the war, Kościuszko returned to Poland, and in 1794, he led a failed uprising, attempting unsuccessfully to liberate Poland and Lithuania from Russian occupation. After suffering serious injury and imprisonment, he was forced to spend the rest of his life in exile. He lived in a number of countries in his later life, returning briefly to America in 1797. The memorial in Philadelphia is the home where Kościuszko stayed on this second visit to America, years after helping to liberate his adopted countrymen. Note that this park site has limited hours and is closed in the winter.

* Note: These parks are ranked based on the total acreage listed in official National Park Service records; however, one park, Pullman National Monument in Illinois, is not included because its official size (.40 acres) does not include 12 adjacent acres managed by the state as part of the overall experience of the park, making the site functionally larger. Additionally, some parks encompass multiple sites that are measured together; the Seattle Unit of Klondike Gold Rush National Historical Park, for example, would be small enough for a place on this list if measured alone, but it is measured officially with the total acreage of the park’s Alaskan units, which together span more than 13,000 acres.