Love National Parks? Support This Lego Project So You Can Build One Yourself

How cool would it be, after coming home from a great national park vacation, to sit down and build your own national park?

Thanks to Gavin Gardner, a new proposal on the Lego Ideas website urges the famous toy company to create a series of play sets to build aspects of three iconic national parks: Everglades, Katmai, and Saguaro. Each set would feature wildlife figurines, distinctive landscape features, and a toy ranger and visitor.

Gardner told me he and his wife got the idea after his daughter received the Lego woman scientist set for Christmas, a set that was designed through the Lego Ideas website. “It’s a no-brainer—there should be a set for every national park,” said Gardner, a seasonal Park Service employee since 2001. (He and his wife, Danielle Norris-Gardner, met at Death Valley where she was working in interpretation.) Gavin is currently chief of resources and maintenance at Springfield Armory National Historic Site.

“This set is both educational and provides a fun play and building experience,” writes Gardner, under his username LegoRanger16 on the Lego Ideas website. “With the Centennial of the National Park service in 2016, the time is right to join the celebration of ‘America’s Best Idea.’” 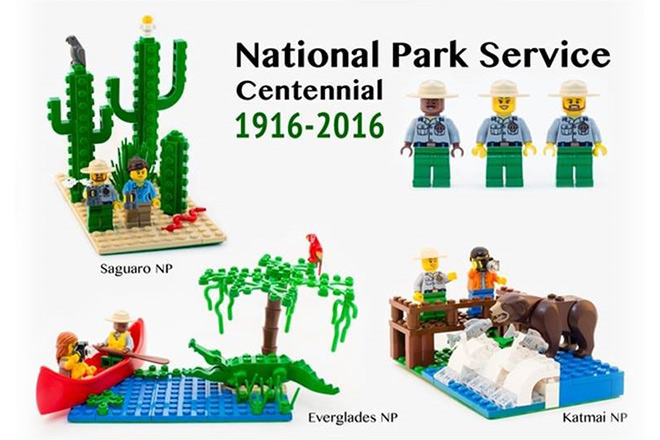 How can you get these play sets for the kids—or the park-loving adults—in your life? For Lego to consider the proposal, it needs 10,000 supporters. Consider logging on to the Lego Ideas site and clicking the “support” button to count your vote toward the project goal! (Supporting the project is free—but requires signing up with an email account and answering a short questionnaire related to the product. This took me about two minutes to do.)

Creative indoor play that encourages creative outdoor play seems like a perfect idea for one of the world’s most celebrated toy companies. Lego already released a couple of park ranger figurines as part of a larger set several years ago (though Lego calls them “forest policemen”—close enough). Likewise, the Park Service has shown its own support for playing with Legos, if this model of the train system at the Steamtown National Historic Site in Pennsylvania is any indication.