"Keys to Freeze": 6 Friends to Cycle Cross-Continent for a Cause

Next month, six cyclists will begin the adventure of a lifetime when they launch “Keys to Freeze,” a six-month, 9,000-mile journey from Key West, Florida, to Prudhoe Bay on Alaska’s northern coast.

Looking at the route, it’s nearly impossible to comprehend the hours of pedaling this enormous dotted line represents as it curves its way up the continent through a massive swath of the United States and Canada—across the Deep South, through the desert, up the Pacific Coast, and into the arctic.

These six friends—Brady Lawrence, Reese Wells, Jon Kasbe, Tyler Deming, Rachel Burns, and Megan Healy—aren’t just in it for the physical challenge, either. They’re committed to doing service projects in several national parks along their route, and they will use the ride to raise money for Climate Ride and NPCA while they pedal.

How did these cyclists put such an ambitious plan together? I spoke with Brady Lawrence, who created the ride with his college roommate, Reese Wells. 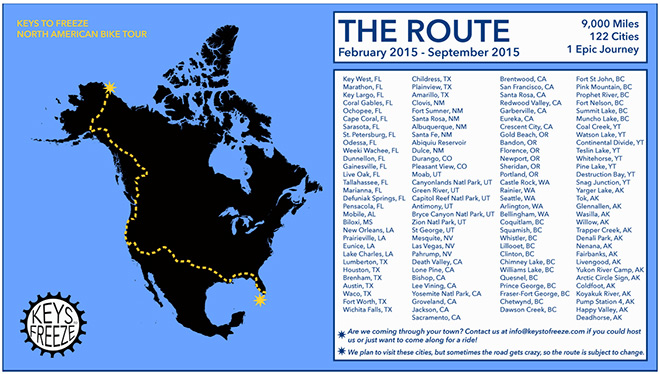 A: It’s a little crazy. Several of us have done Bike and Build, a cross-country bike trip that works with Habitat for Humanity to raise money for affordable housing. We knew we really liked those trips, which are 3,000 or 4,000 miles. We wanted to do something bigger.

We were just playing around with ideas, and Reese came up with the name Keys to Freeze—it would obviously begin in the Florida Keys, but we didn’t really know where we wanted to finish. Originally we wanted to go to Mount Rainier and maybe climb Mount Rainier, and then we kind of played around with [the idea of] climbing Denali in Denali National Park in Alaska, but ultimately decided that we had no alpining experience. We knew other bike trips started at Prudhoe Bay, Alaska, which is the top of the Pan-American Highway, so we ended up settling on that. Even then, it felt like a pipe dream, but over time, we were like, “Yeah, we’re really gonna do this!”

Q: How are you training for something so much bigger in scope?

A: The biggest difference is that Bike and Build is supported. The daily mileage is about the same, but we’re carrying all of our gear on our bikes [instead of transporting it separately in a support van]. Biking with that level of weight is a whole other animal. Getting used to that is going to be important.

The change in distance—basically, that’s a mental battle. It’s going to be about having your head in the right place and being excited about the trip, but understanding that we’re going to be on the road for six months and it’s not going to be an easy life.

Q: So you’re carrying your camping equipment, your food and water, all of that—on your bikes?

Q: Do you have some kind of support network along the route?

A: We do. We’ve made a serious push through social media and our website to activate our family and friends and the Bike and Build alumni network. There’s a surprising amount of people who are really into adventure cycling and are happy to host you or help you out along the way. We actually are going to be sleeping on the floors of people’s houses a lot of the way, which is awesome.

Q: That must be a really tight-knit community.

A: Yeah. It’s been amazing the outpouring of support we’ve received from people all over the country that want to help us be successful. It’s been pretty humbling.

Q: How did you choose to fundraise specifically for Climate Ride and for NPCA?

A: As more people kept finding out that we were doing this, we were honestly somewhat surprised to find out that there was a genuine interest in this trip and that people were getting excited about it. We felt that it was important to make it about something more than just ourselves.

We’re all extremely passionate about the natural world and the wild places all across the United States, so we knew we wanted to work with [a group] like NPCA that is active in protecting the environment. Rachel was able to get connected with people at NPCA. Through NPCA, we got linked up with Climate Ride. It all kind of snowballed, and we’re totally thrilled to be working with organizations that are doing such fantastic work.

Q: What keeps you motivated through all of this training?

A: Honestly, for me, the honeymoon phase hasn’t worn off yet. I’m just so excited that I’ll be outdoors for six months doing what I love, meeting new people, going new places, and getting to see the country in a totally unique way. Right now, the training rides just come naturally—but I’m sure somewhere down the road when things are more difficult and we’re in the cold and the rain, we’re going to have to draw on some greater motivations!

Q: You sound super confident and psyched. Are you nervous at all?

A: I’m definitely nervous. Every now and then, it kind of sets in—not necessarily the physical aspect of it so much as the idea of being on the road and living city to city every day for six months and the mental and emotional toll that is inevitably going to take.

The trip is going to be three times longer than any of us have done. A lot of the way, we’ll have access to water and food. Once we hit parts of Alaska, there’s going to be long, long stretches where there’s just not going to be anything. Being able to make it through that, braving the elements and everything, that’s going to be a challenge!

Q: Are you planning time for sightseeing?

A: It’s a relatively tight schedule, but we tried to budget time to rest. Most of us have never been to New Orleans, so we’re all really excited to take three days off there. Another aspect of the trip we’re really excited about is trying to do service projects in several national parks—Denali, Yosemite, the Everglades, Bryce Canyon. We have plans to go to all these national parks, potentially even Tule Springs, the new one outside of Las Vegas. That’s still a work in progress, but we’re really excited to spend time in these beautiful places across the United States.

Q: Is there a place you’re most looking forward to seeing?

A: It changes day to day. I’m really excited for Yosemite. I just watched a documentary called Valley Uprising about the Yosemite rock-climbing scene and it got me really excited to go there. Anytime you travel to a place by bicycle, it has mystique. It just feels special. It feels like you really earned the place that you’re at.

Q: I saw a journal on your website. Are you planning to post updates from the road?

A: That’s the plan, to post as much as possible and keep our social media up to date along the trip. I don’t know if we’ll be able to post videos from the road, but we’ll try to.

Q: Is there advice you’d give a casual cyclist looking to take on a bigger challenge like this?

A: Set it up so you’re going somewhere that excites you. When you stop doing loop rides and start riding from point A to point B and have a destination you’re excited about, it changes your whole mindset about the ride. There’s not this feeling of “I just want to get back to my house and my couch” if you’re going to a place you’ve never been before. It’s really easy to get really excited about it.