If you’re looking forward to the New Year and getting ready to turn over a new leaf, you aren’t alone. In our nation’s capital, the 114th Congress begins on January 6 with a renewed sense of purpose. Lawmakers will reappoint their leaders, select their committee assignments, and put forward a new slate of bills.

Even with a fresh start, analysts expect the partisan stances and policy gridlock to continue. However, Americans across the political spectrum remain united by their strong support of national parks. The National Park System’s centennial in 2016 offers a golden opportunity for Congress to leave a lasting legacy on a critical bipartisan issue—ensuring our national parks are adequately prepared to serve billions of visitors over the next century.

Bipartisan polling NPCA commissioned last year showed that four in five voters—Independent, Democrat, and Republican—believe that it is important for the federal government to protect and support national parks. More than half believe it is extremely important. Congress overwhelmingly agreed on comprehensive legislation to expand our National Park System and provide additional funding for national parks in the final days of the 113th Congress. We hope this show of bipartisanship continues in the 114th Congress.

Here are five ways Congress can help restore our national parks for the next century, while also helping to restore political order.

The National Park System has been damaged by a series of budget cuts over recent years, and as a consequence, many parks and park facilities are providing a reduced level of service to the public and offering less protection and maintenance to park resources. In today’s dollars, National Park Service operations have been cut by approximately 7% ($134 million)  and national park construction funding by more than 62% ($227 million) from four years ago. Congress should, at minimum, restore funding to previous levels to prepare our parks for the next generation of park visitors.

Wildfires are necessary for the health of our nation’s forests, but they have occurred with more frequency and intensity in recent years, threatening our communities. The dedicated funds to combat these wildfires have exceeded the budgeted amount nearly every year since 1990, and agencies like the National Park Service fail to receive the funding they need. Congress should pass the Wildfire Disaster Funding Act which would fund emergencies like wildfires so that these disasters cease to gut agencies’ operational budgets. 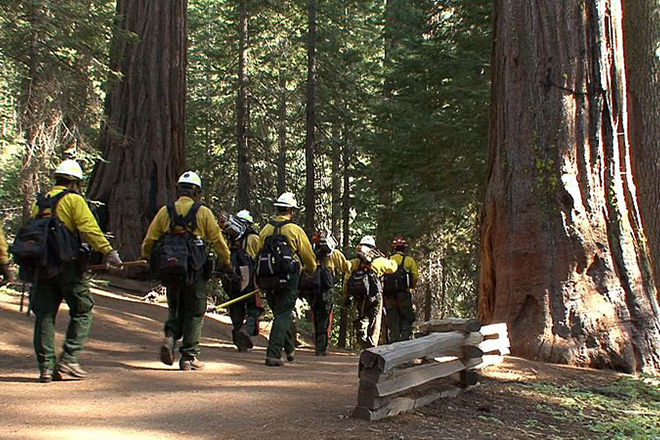 The Federal Land Recreation Enhancement Act (FLREA) authorizes the National Park Service to collect recreation fees and spend those funds on projects that directly benefit the visitor experience, including repairing and improving facilities at national parks, offering education materials and services, and providing law enforcement. However, this law expires in 2016. Without reauthorization, fees collected at park entrance gates and visitor centers would be directed to the U.S. Treasury rather than retained by national parks—to the tune of $180 million a year. Congress must provide long-term authority for the parks to retain the fees they collect in this congressional session. 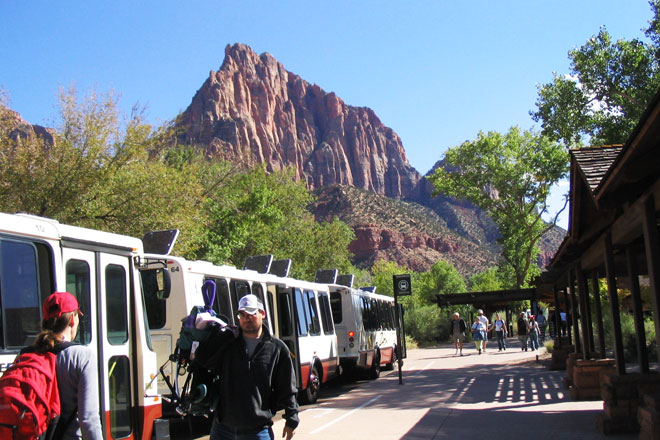 Passengers board free shuttles at the Zion National Park visitor center made possible through recreation fees. Renewing the Federal Land Recreation Enhancement Act (FLREA) will allow parks to continue using entrance and activity fees for projects like these that benefit the patrons who pay them. National Park Service photo.

The centennial is an ideal opportunity for public and private organizations to invest in restoring and renewing our national treasures. By matching private donations from individuals, foundations, businesses, and other private-sector organizations with federal funding from a Centennial Challenge program, Congress can double the investment in construction, maintenance, and education programs as well as other projects in our national parks. A previous program raised $88 million, but stalled with a change of administration. Now with the support of the current administration, it is up to Congress to authorize the Centennial Challenge and restore the program for the benefit of the next generation.

Will this new and re-energized Congress bring the sense of order some candidates promised during the election? We certainly hope so—and the national park centennial just might be a unifying mission to help bridge the divide.