Capturing the Essence of the Everglades

How does Mac Stone photograph such gorgeous images of the Everglades? We got tips, stories, and more in our new Q&A.

Gainesville native Mac Stone discovered his gift for photography and his love of nature at an early age. In the years since, he’s carried his camera throughout Florida, scheming creative ways to capture wild landscapes and curious creatures in their natural habitats, sometimes putting weeks of planning into the execution of a single image. (For example, see how he photographed the majestic bird known as a snail kite in the video below.) After five years of living and working as a biologist in the Everglades, he released his first book, Everglades: America’s Wetland, earlier this month—a self-described “labor of love.”

I asked Stone about his passion for Florida’s most remarkable places and how he captures such engrossing, inspirational photos.

Q: I shared your snail kite video with some folks in my office, and my coworker wants to know if you need an assistant. Are you hiring?

I would love having an assistant! If people are looking at that video and saying, “Oh, I want to do that,” that’s pretty cool, because there were a lot of moments in there that weren’t fun.

Q: Your art is obviously very rooted in your love of the Everglades and your home state of Florida. What is it that captures your imagination and keeps you exploring these same places year after year?

I started getting into photography in high school. I started going out and seeing these incredible things and wanting to show my friends, “Hey, look at this! This is right in our backyard.” I kept trying to go back to really capture the essence of the area. After some time, I wasn’t going for the adventure, I was going for the photos.

I lived in a typical neighborhood with a one-acre property around a bunch of other houses. I could drive down the road one mile and be in a place where you just thought you’d stepped back in time a hundred years. That really grabbed me, being able to find solitude and feel like you’re discovering something, even though it’s been around for a long time. A lot of my photography tries to capture that—the adventure aspect, the stories of these lands.

I want to constantly live in that moment of discovery—but also bring people into it. Florida is known for its beaches and its golf courses and its Disneyworld. Maybe the real show is in your backyard.

Q: Have you noticed changes in the landscape since you started photographing these places?

Definitely. Not so much in the Everglades, because the changes on a geological time scale and development scale aren’t that big. With Gainesville in particular, growing up there, I saw huge changes just when I came back from college.

One of the things that really got me into this idea of conservation photography was this particular place I would go all the time in high school—my photographic training grounds. I’d wake up super early and just watch this polar fog coming off the water with ducks and barn owls and bobcats and all kinds of things and think, this is paradise.

This was during Florida’s boom, around 2000, when lots of speculation was happening, lots of apartments were going up. I talked with some of the local landowners and I was showing them my photos. They were saying, “Yeah, we love this area, but there’s a housing development that’s going to come in here.” So we started giving public presentations of my photos and outreach groups to the county commissioners to put a halt or at least find another place for the development.

It didn’t work. The housing development went in, and I kid you not, I came back from college and drove down the road and saw all this new construction going on and my heart just sank. As I pulled into the area—it’s probably unrelated, but the imagery still sticks in my mind—I saw the bobcat that I’d seen dozens of times hit on the side of the road.

You have this constant battle between nature and development. It felt like a failure to me, but it also underlined that there is a need to continue to tell these stories and to fight for the places that don’t have a voice. 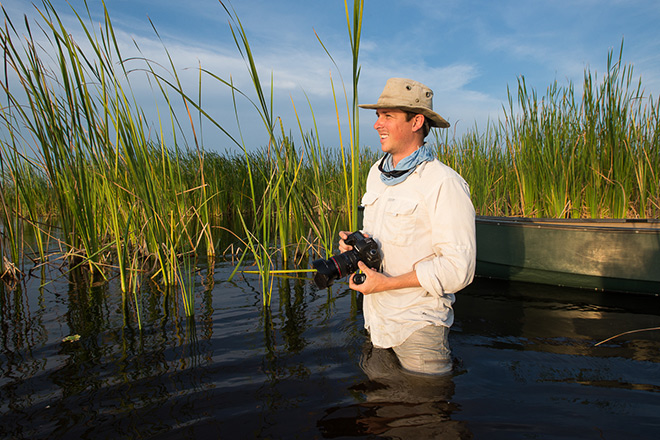 Q: That’s a heartbreaking story. The places we love need constant protection, and it only takes one developer to take it away.

And take it away forever. I mean, my family lives in a house with air conditioning and a lawn. It’s not to say that people shouldn’t have homes. It’s that there are certain ecological hotspots and corridors that are so important to maintain. We’ve got to get smarter about where we’re allowing new developments.

Oh, big time. Being able to pull at someone’s heartstrings through music or art or photography, even if they can’t be there physically, they can still feel like they’re a part of this landscape.

People have powerful voices and if you can get them emotionally involved, we can all contribute something. For me, this is just my part. It’s what I’m good at, the way I found my voice. Hopefully it inspires people to take up arms and join the fight.

Q: Is there a particular threat to the Everglades that concerns you most?

The biggest threat to the Everglades is ambivalence—people just not understanding what the problems are and why it’s so special. The success of the park is really dependent on external factors. If people don’t understand the way that this watershed works, we’re going to have big trouble convincing policymakers and water management authorities that we need to get fresh water down to Florida Bay to have this estuary and this watershed succeed. It’s not just for the animals, the birds, the plants—all the unique things that call the Everglades home. It’s also for the 7 million people that depend on the Everglades for their drinking water. It’s also to bolster the fisheries that have made South Florida the sports fishing capital of the world. All these things depend on this watershed.

It’s very easy for someone to go down to the Everglades now and say, “Yeah, it looks fine, it looks great.” But when you get down to the science, things are not okay. 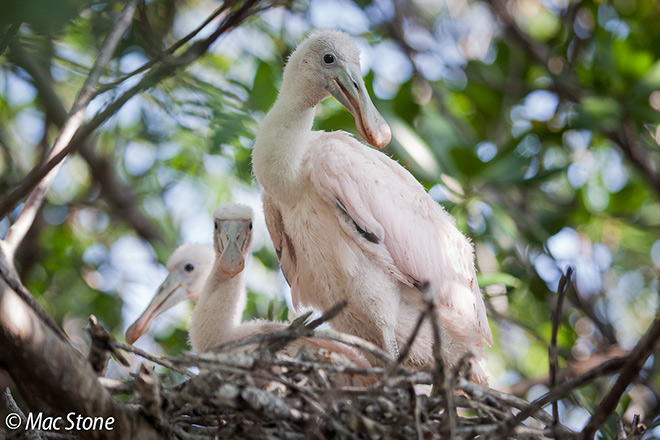 Q: I’ve never been to the Everglades. If I were heading there tomorrow, where should I go first?

There are so many ways to answer this!

There are endless things to do in the Everglades. Do you want to go camping? Paddling? Fishing? Hiking? Airboating? There’s a whole slew of places that can cater to any one of those needs.

What I would recommend for someone going for the first time is to hire a guide. You get that local knowledge, and certain guides will take you on a tour that doesn’t make you feel that your hand is being held—you’re still getting off the beaten trail. I have a guide in particular that I went out with all the time. His name is Garl Harold of Garl’s Coastal Kayaking. In my opinion, he is hands-down the best Everglades tour around. These guys who are trained and who have been doing it for a long time are some of the best ambassadors for the wetlands. They can take people there and give them memories that are going to last for a very long time.

Q: Do you have any favorite spots that are underrated or off the beaten path?

Fisheating Creek is one of them. It’s one of the most scenic and beautiful undulating and meandering waterways that you can explore in Florida. Loxahatchee River is another. If you want to get your feet a little wet, go to the Fakahatchee Strand State Preserve—you’ll feel like you’re in Jurassic Park walking along all the pond apples into the black water with all those epiphytes hanging over your head. You feel like you’re back in ancient times.

Q: You recommend that beginning photographers should start by exploring their hometowns and that “great images will blossom from experiences in the place that’s closest to your heart.” That’s great advice, but it feels like only part of the story. I go to places that I love all the time, and my photos are still pretty awful. Can you share more words of wisdom?

I didn’t take classes on photography. The way I learned was by taking lots and lots of bad photos. The best way to learn is by kicking yourself in the butt and saying, “What did I do wrong and how can I make it better?” If you care about it that much, you’ll go back and improve on your mistakes. It’s all about learning to read light and using your camera’s limitations, because it cannot see the way that we see. Using those limitations to your advantage, that’s how you make good photos.

Q: So, keep making mistakes? I can do that.

I make so many mistakes. I have to be honest with you with this snail kite image. The video paints a picture of what it was like, but those first four days [were a] complete failure.

I had this image in my mind and I just had to get it, because I knew it hadn’t been done before. I finally moved that trap to the right flyline. When they finally came down to the trap, I was so excited. I was sitting there triggering my wireless trigger and I was like, “Yes! I can’t believe this! This is crazy! It’s working!” They devoured all the snails in the trap, and it was the most beautiful light. It was sunset. Everything was painted in this amber glow. It was unbelievable. I went to my camera like a kid on Christmas and pushed play. Not a single photo had fired. Not one.

Something had gone wrong. I don’t know what it was. I was just floored. It was a huge mistake. What if I’d only had that one day? Luckily, I had three more days and I could find more snails. The next day, I got ten images and none of them were good enough. The camera was at the wrong angle; I wanted clouds in the background and the horizon and the water. So I had to just keep going back day after day and doing it over and over again.

That’s how it is. If you go to a place and you’re not happy with the photos, what is it? Is it the light? Is it the composition? Is it the lack of subject matter? You have to be your own best critic. For me, the power of the photo makes the power of the memory. I can now travel back and I can be in that water looking at this and I can say, yes, this was an incredible experience.