The South Park National Heritage Area lies squarely in the center of Colorado and remains largely unchanged from the time prehistoric men and women spent their summer months near the headwaters of the South Platte River. This high-altitude valley spans 1,800 square miles in Park County with vast grasslands and ancient forests framed by two separate ranges of the Rocky Mountains. The area is known for its natural beauty and still captures the spirit of the western frontier, but it’s most famous for the gold that once drew an estimated 100,000 prospectors there during the Pike’s Peak Gold Rush.

#{image.caption}
Some of the bristlecone pines on Windy Ridge above the tiny town of Alma, Colorado, are well over 1,500 years old. Alma is the highest incorporated town in North America. Photo © Linda Balough.

In 1803, a trapper from Kentucky discovered gold in the streams of the South Park and shared the story with explorer Zebulon Pike, but the trapper was more interested in his furs and the explorer in his expedition report. The news languished until gold was rediscovered in 1859, a decade after the California Gold Rush, triggering a stampede of hopeful prospectors and their families in one of the largest gold rushes in North American history.

Curiously, it wasn’t the miners and prospectors who first settled in the South Park year-round, but ranchers who arrived to feed the miners. These intrepid families quickly discovered that the natural grasses in the area were excellent feed for cattle and built highly successful ranches. As scientists studied these grasses and other native plants over the ensuing years they discovered over 150 species of rare or endangered plants, including some that grow nowhere else in the world. Sharp-eyed hikers can often catch sight of these rare treasures as they hike the high mountain trails. 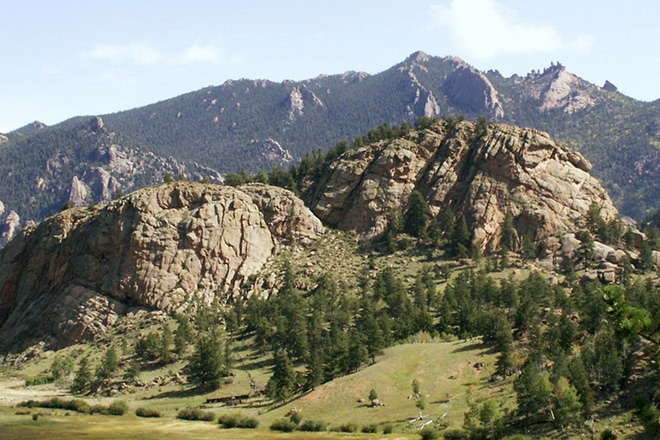 Spring runoff cascading from mountain snows once spread into the lower valley and settled into alkaline wetlands known as fens, fostering plentiful stands of plants and hosting a wide variety of insects, birds, and smaller wildlife. The area reminded early mountain men of the wet lowlands of the Old South and they dubbed it Bayou Salado, or salt marshes. For a while, ranchers diverted much of this runoff into their pastures, growing hay so rich that it was said to be shipped to the Queen of England for her horses. But soon, water-hungry cities nearly 100 miles away at the foot of the Rockies became more crowded, and the abundant water of South Park became more valuable than what ranchers could make raising cattle, sheep, and crops.

Today, rights for 80 percent of the water that flows from the Park County’s mountains belong to Denver, Colorado Springs, and other area cities. This water is stored in large reservoirs in the South Park, drying out the formerly verdant Bayou Salado. However, the many reservoirs in South Park and the rivers and streams that feed them delight fishermen, bird watchers, and waterfowl hunters. White pelicans, blue herons, and egrets join hundreds of other bird species which attract eager bird watchers to the South Park and its gateway areas within Park County.

Travelers enter the South Park via high mountain passes and often gasp at the views of the vast valley basin with its wide-open ranchlands and tree-covered mountain slopes. They may pass herds of bison or cattle and glimpse headquarters from the 1860s still serving working ranches. Those who visit ranches may experience a taste of life in the saddle, rounding up herds and mending fences, or simply tour the grounds and imagine life on the open, windy range.

Those who choose to bicycle and drive along former pack burro trails and narrow-gauge railroad beds may be able to imagine the excitement of prospecting as they ride past the relics of 19th-century mines, mills, and long-abandoned boom towns, marveling at the stamina of the men and women who toiled on the mountaintop mining sites.

Pronghorn and other wildlife abound in the South Park National Heritage Area, which is only an hour and a half’s drive from the busy Front Range cities of Denver and Colorado Springs. Photo © Linda Balough.

Wildlife has always thrived in these wild places, and summer visitors are as likely to see antelope, deer, and bison as they would if they had arrived with the wagon trains in the 1860s. Winter snowshoe and cross-country enthusiasts can encounter many species of animals along the trail, while even those driving along the main highways may spot hundreds of elk or bands of bighorn sheep grazing near roadways.

Local residents are adamant about preserving the unspoiled natural, cultural, and historic resources and the mountain lifestyle that brought them here. Visitors can join in the unique festivals, uncrowded trails, local arts, abundant outdoor activities, and magnificent scenery throughout the South Park National Heritage Area.