In Massachusetts, park officials barricaded a bridge leading into Lowell National Historical Park because bricks in the structure could fall on people's heads. In Washington, D.C., a bridge on the George Washington Parkway that leads to Arlington Cemetery and is used daily by thousands of people is so structurally deficient, the National Park Service could close it to heavy vehicles such as tour buses within two years if it isn't repaired. In Wyoming, important sections of the Yellowstone National Park Grand Loop Road are in such need of repair that they threaten visitor safety.

You may be wondering, how could the National Park Service let these roads and bridges get to such an alarming state? The National Park Service’s transportation systems have been in a steady state of decline over the past couple of decades due to chronic underfunding by Congress. Congress must reauthorize transportation legislation before October and increase the dedicated investment in national park transportation projects to more adequately fix these crumbling roads and bridges. However, before that can happen, lawmakers must first act to provide an infusion of funding this month to the Highway Trust Fund, the primary funding source for the surface transportation bill, to keep current park construction projects on track.

As thousands of Americans head out this weekend to celebrate Independence Day at our national parks, here’s a snapshot of what’s at stake.

Q: What is the Highway Trust Fund? A: Congress established the Highway Trust Fund in 1956 to finance the interstate highway system and other transportation-related projects. Funding comes from a federal gas tax of 18.4 cents per gallon of gas (24.4 cents per gallon of diesel). Less than one-tenth of one penny of that tax goes to transportation-related projects in national parks, such as repairing roads, bridges, tunnels, and trails, and providing alternative modes of transportation like park shuttles.

Q: What will happen at national parks if funding runs out on the Highway Trust Fund? A: It is hard to know what the effects would be on specific parks, but it could slow the progress on all current national park transportation projects and prevent the approval of important new projects. For example, the multi-year reconstruction of significant portions of the Yellowstone Grand Loop Road, including the Pelican Creek Bridge and North Entrance Road, could be delayed, continuing to threaten visitor safety. 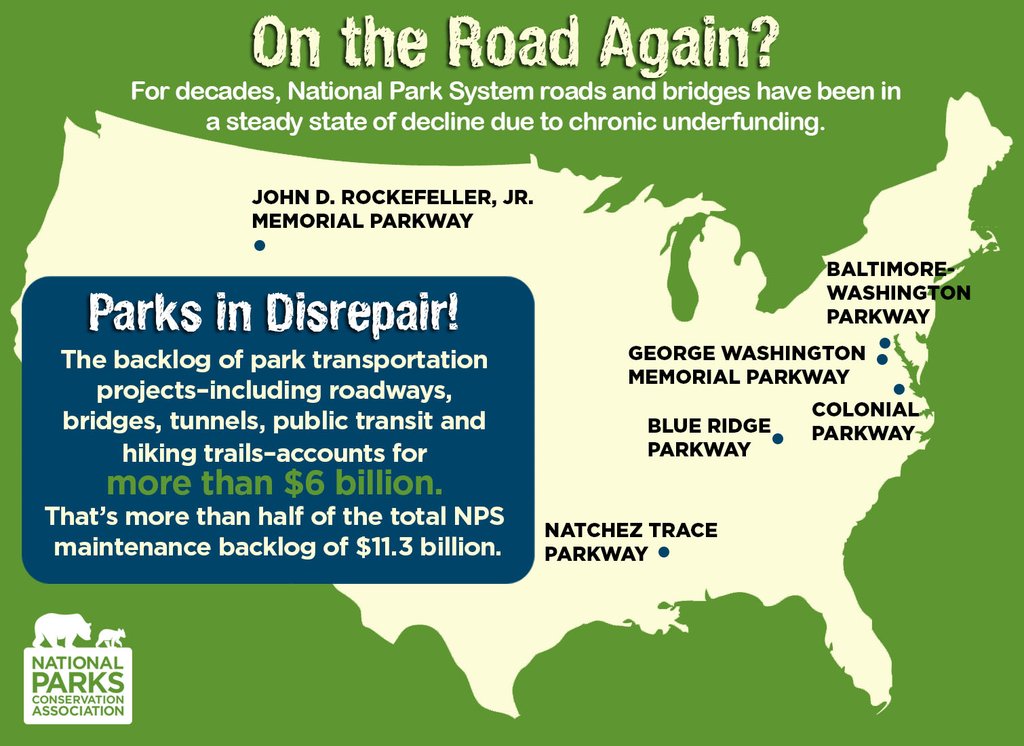 Q: I care about national parks, but is it really so urgent for Congress to fund repair work on a bunch of small, winding roads out in the middle of nowhere? A: The National Park Service actually manages nearly 10,000 miles of roads, many of which are in poor to fair condition, and nearly 1,500 aging bridges. Not all park roads are meandering two-lane roads; they include major thoroughfares such as the scenic Natchez Trace Parkway that transverses Alabama, Mississippi, and Tennessee; the Blue Ridge Parkway that winds through North Carolina and Virginia; and the Baltimore-Washington Parkway that connects Washington, D.C. and Baltimore. One of the largest repair projects facing the national parks is the Memorial Bridge in Washington, D.C., which connects the capital city to Northern Virginia and carries 68,000 vehicles per day, including our Members of Congress to and from Capitol Hill. Fixing the bridge would take the entire annual funding allocation the Park Service receives from the Highway Trust Fund.

Q: What would it cost to construct and repair roads, bridges, and tunnels, develop mass transit, and fund other needed transportation-related projects in our national parks? A: After years of underfunding from Congress, the backlog of park transportation projects totals more than $6 billion dollars. Without additional funding, this backlog will only continue to grow.

Q: Are there significant safety issues to letting these projects languish? A: As roads, bridges and tunnels deteriorate, park officials may need to limit visitor access, creating hassles for the thousands of visitors attempting to enjoy public lands.

Q: Could national park partners such as friends groups or the National Park Foundation help raise money to meet these repair costs if Congress doesn’t act? A: Although private philanthropists provide critical help on a number of important park needs, few park partners have interest in contributing charitable funds for infrastructure projects like roads and bridges—projects that many people believe are a core responsibility of government. Even if there were charitable interest, all of the charitable donations the parks receive in an average year is still only equal to about 2% of the current transportation backlog. It is up to Congress to fix park roads and bridges, not charities.

Q: Will members of Congress really let this funding expire? A: We certainly hope not. We need our roadways and bridges open, safe, and ready for the more than 282 million people that visit national parks each year—a number that is expected to grow as the National Park Service gears up for its centennial in 2016.