If You Build It, They Will Come

America’s favorite pastime — from one of baseball’s iconic professionals to its youngest players in the Caribbean — has a presence in several national park sites.

The origins of baseball are shrouded in mystery, but historians now trace the sport’s earliest mentions all the way back to the Colonial period in America. So, it’s little wonder that threads of our national pastime can be found woven, here and there, into the fabric of our national parks.

There’s Hot Springs National Park in Arkansas, where the spring training exploits of Babe Ruth are the stuff of legend. And Manzanar National Historic Site in California, where an Ansel Adams photo depicts incarcerated Japanese Americans playing baseball despite their devasting confinement. Or Paterson Great Falls National Historic Site in New Jersey, where you can visit the only baseball stadium in the park system, one with deep connections to Negro League history.

That venue, Hinchliffe Stadium, fell into disrepair and was nearly lost before advocates campaigned for its inclusion in the park and preservationists spearheaded its current renovation. But while Hinchliffe may be the only full-scale baseball stadium in the park system, it’s not the only ballfield.

Finding a regulation field for youth league play at a recreational site ― such as Fort Scott Field at Golden Gate National Recreation Area in California or the Fort Tilden Fields at Gateway National Recreation Area in New York ― may not be totally unexpected. But did you know that one of the 63 national park sites with the prestigious capital-N, capital-P designation includes a first-rate Little League baseball field?

In this December 2021 image, a Little League baseball field in Virgin Islands National Park undergoes repairs after serving as a base of emergency operations during hurricanes Irma and Maria in 2017.

Virgin Islands National Park comprises nearly 60% of the island of St. John in the U.S. Virgin Islands. Best known for its world-class beaches, lush landscape and archaeological sites, St. John is also home to a small but vibrant community of just under 5,000 residents. Most live in and around Cruz Bay, St. John’s primary port and commercial and municipal center, where most of the island’s visitors arrive by ferry. Its harbor is also the site of Virgin Islands National Park’s visitor center, accessible to tourists and parkgoers by both land and sea.

There, just across the road from downtown shops and adjacent to the visitor center, is an actual field of dreams ― because what else would you call a sandlot in a tropical paradise?

Built to standard Little League dimensions ― the center field fence stands 210 feet from home plate ― and managed by the territorial parks and recreation department under a special use permit from the National Park Service dating back to 1970, the field is nestled under palm trees and the verdant hillsides overlooking Cruz Bay. And like historic Hinchliffe Stadium, it has also been undergoing a major renovation of its own. 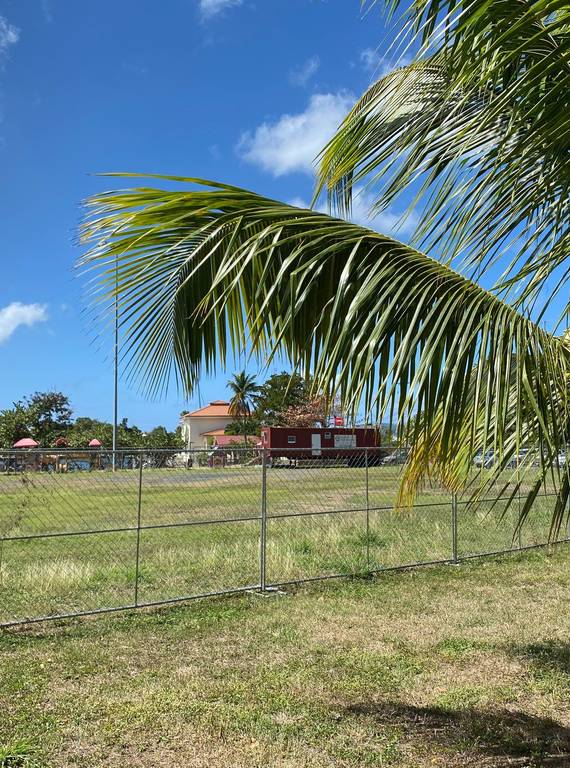 Built to standard Little League dimensions, this field in Virgin Islands National Park is managed by the territorial parks and recreation department under a special use permit from the National Park Service dating back to 1970.

When hurricanes Irma and Maria devastated so much of St. John in September 2017, the ballfield was damaged ― but it was rendered completely unusable after serving as the base of operations for various rescue and utility vehicles in the aftermath of the Category 5 storms. With recovery essentially complete, the Park Service began rebuilding the ballfield in 2021, and it’s coming back better than ever, with a brand-new backstop and dugouts, covered bleachers and padded fencing ― even new field lighting to accommodate evening games.

Unlike other national parks with gateway communities beyond their clearly defined boundaries, Virgin Islands National Park is almost impossible to separate from the community that surrounds and supports it. And that, more than anything, is what gives this ballfield its national park bona fides.

“The park looks forward to the day we can hear the shouts of laughter, the crack of a bat on ball and celebration again from the restored ballpark outside our Visitor Center’s front doors. We’ve missed those sights and sounds.”

Keep up the good work, Virgin Islands National Park. If you build it, surely, they will come.