A National Park with Its Own Mountain Range

Among the 63 national parks, Big Bend is the only one that encompasses an entire mountain range — the Chisos Mountains.

Big Bend National Park in Texas takes its name from the abrupt curve of the Rio Grande River separating the U.S. and Mexico. The park’s remote location and dark skies make it popular for stargazing, while its geological forces create a dramatic and diverse landscape.

Another interesting fact: Big Bend is the only national park that encompasses an entire mountain range — the Chisos Mountains. These volcanic formations stretch 20 miles across the southern tip of West Texas, and four of its peaks exceed 7,000 feet above sea level. Emory Peak is the range’s highest point at 7,832 feet — a sharp contrast to the park’s lowest point of about 1,800 feet at the Rio Grande River.

The National Park Service likens the mountains to a forested island in a desert sea. Also called a “sky island,” the mountains and their woodlands are populated by plants and animals that could not normally survive in a desert — including black bears — as well as more than 300 species of birds.

The view from Emory Peak Trail in the Chisos Mountains of Big Bend National Park.

The Chisos are volcanic rock 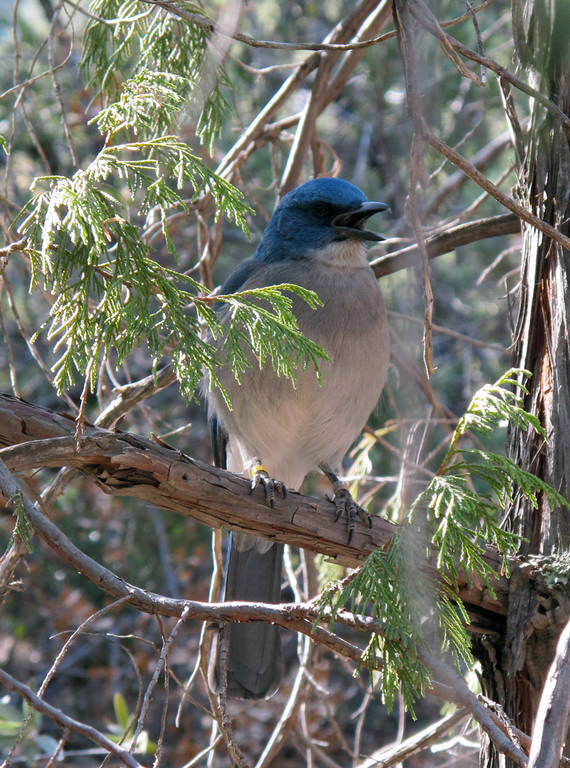 A Mexican jay in the Chisos Mountains, one of many species that makes this mountain range a world-famous birdwatching destination.

Piñon, oak and juniper woodlands cover these higher elevations and their foothills, attracting a variety of bird species that otherwise would not reside in this region of Texas. Species distinctive to the Chisos Mountains include the Mexican duck, lucifer hummingbird, Mexican jay, black-capped and gray vireos and the varied bunting. The Colima warbler is considered Big Bend’s specialty bird, because the Chisos Mountains are the only place in the U.S. where the bird nests and breeds. A ground nester, the Colima arrives in April from its winter home of southwestern Mexico to breed amid the hardwood habitat.

Because Big Bend is a desert park, temperatures range widely from its desert floor to the top of the Chisos range. On summer days, the low areas along the Rio Grande often exceed 100 degrees Fahrenheit, while the mountains can be at least 10 degrees cooler.

Why the name Chisos?

The Chisos Mountain range is believed to be named for the Chisos Indians, one of several groups of hunters and gatherers identified by the Spanish as living in the region around 1500 CE. 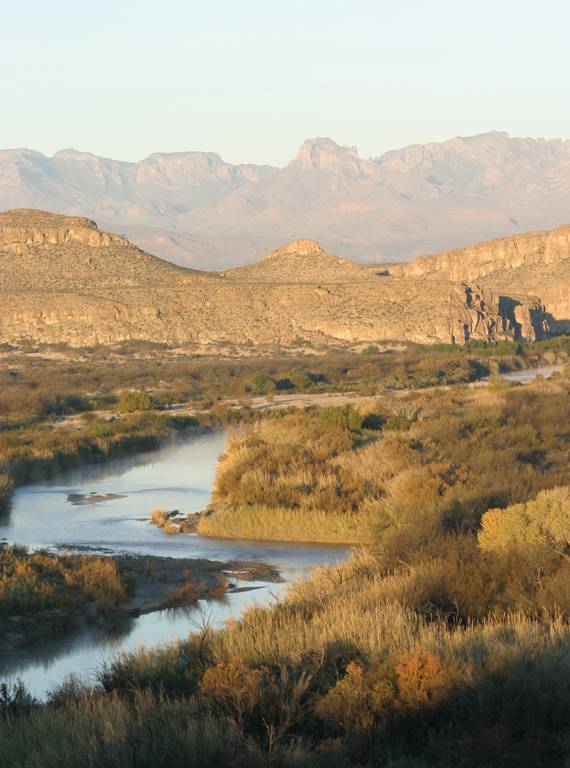 A view of the Chisos Mountains from the Rio Grande Village Nature Trail in Big Bend National Park.

Other explanations for the name have been offered, however. In the 1700s, the mountain range became the base of the Mescalero Apache Indians, who displaced or absorbed the Chisos Indians and raided Spanish settlements forming in the area. Chisos is said to mean “ghost” and could have referred to the ghost of Mescalero Apache Chief Alsate. Chisos is also the plural form of chis, meaning “clash of arms,” but could also relate to a Spanish word meaning “bewitchments” or “enchantments.”

Big Bend National Park is the 15th largest park in the national park system and has a lot to offer — from hiking and back-country camping to birding, star-gazing and scenic drives. The National Park Service outlines suggested itineraries for one-day, three-day and weeklong visits.

A mule deer in the woodland thickets of the Chisos Mountains.