As the climate warms, Lake Superior’s ice coverage shrinks — and opportunities to visit Apostle Islands’ ice caves and experience other winter rites of passage along the shore are slowly disappearing.

Many national park sites boast some sort of fleeting natural phenomena: the way that sunlight hits the water cascading down Yosemite National Park’s Horsetail Fall in February turning the flume into a flame; Kemp’s ridley sea turtle hatchlings crawling to the ocean along Padre Island National Seashore in the summer; and the aurora borealis flickering overhead at Denali National Park and Preserve, to name a few. One of the most difficult to experience, however, may be the ice caves at Wisconsin’s Apostle Islands National Lakeshore. Every winter, Lake Superior’s fierce wind and waves, coupled with water seepage and frigid temperatures, transform red sandstone sea caves into an otherworldly universe of snow and ice along a 2-mile stretch of mainland shoreline. But the last year they were accessible to the public was 2015.

During a nine-day window starting in late February of that year, 38,000 well-bundled visitors hiked from the national lakeshore’s Meyers Beach up to 6 miles round trip over jagged shards of frozen lake ice in temperatures as low as minus 20 degrees Fahrenheit to catch a glimpse of the caves, their entrances guarded by foreboding icicle jaws.

“It’s a challenging adventure, but it can be breathtakingly beautiful, and very memorable,” said Julie Van Stappen, the park’s natural and cultural resource stewardship director. “If people are willing to brave brutally cold temperatures for a rare experience in nature — that’s what makes it special.”

The ice caves are hard to reach because the sole mainland path there, the Lakeshore Trail, leads hikers to the top of a precipitous cliff with no access to the caves 50 feet directly below. Though hikers can catch some views from the trail, the only way to enter the caves is by walking across the ice. With a warming climate, however, the ice on the world’s largest freshwater lake by surface area is steadily receding.

According to the National Oceanic and Atmospheric Administration’s Great Lakes Environmental Research Laboratory based in Ann Arbor, Michigan, the long-term average for annual maximum ice cover on Lake Superior is 62.3%. But graphs charting its recent history have risen and plunged like the stock market: The highest annual ice cover was 100% in 1996. The lowest was 8.5% in 2012. In general, Lake Superior’s annual maximum ice cover is declining 7.3% per decade, almost twice the rate of decrease of any of the other Great Lakes.

This decline might seem relatively small, but it is an alarming shift, according to Jay Austin, a professor of physics and astronomy who is also a limnologist at the University of Minnesota Duluth’s Large Lakes Observatory. “One of the things I find interesting about Lake Superior and ice cover specifically is that it’s super sensitive to small changes in climate,” Austin said.

In a study Austin published with colleague Steven M. Colman in 2007, he concluded that since 1980 Lake Superior’s surface water has been warming by an average of 2 degrees Fahrenheit per decade, making it one of the fastest-warming lakes on the planet, a trajectory that has continued since the study was published. In this and further research, Austin and colleagues have also concluded that the lake’s diminishing ice cover is one of the predictors of subsequent summer conditions, including higher lake temperatures. In short: Within decades, “the lake will be a fundamentally different place,” he said.

Because studying Lake Superior in winter can be very dangerous, there is an enormous gap in real-time winter data. That combined with the changing climate means predicting near- or distant-future ice coverage on Lake Superior is still “an in-depth, million-dollar question,” said Jia Wang, an ice climatologist at the Great Lakes Environmental Research Laboratory.

To try to answer that question, NOAA has embarked on a five-year project called the Great Lakes Earth System Model. The multi-disciplinary lab study is designed to simulate the past and present regional climate in the Great Lakes, taking into account factors such as ice cover, lake levels and temperature. This data, when crunched together, will help scientists predict ice cover and other environmental scenarios into 2050.

“Given that we’ve been neglecting winter for decades, I suspect it will take many years to get a comprehensive idea of how Lake Superior ‘works’ in winter,” Ted Ozersky, associate professor of biology at UMD’s Large Lakes Observatory, said in an email. “We can think about ice cover as a ‘master variable’ that has impacts on many important physical, chemical and biological aspects of the way lake ecosystems work.” For example, ice controls how much light is available to support the growth of phytoplankton, the tiny plants that make up the base of aquatic food webs. “We might be surprised by how things we care about like water quality and fisheries change with changing winter conditions,” he said. 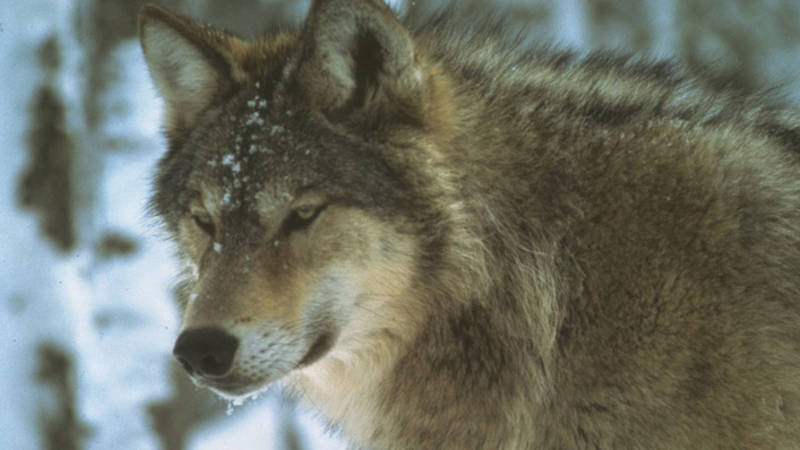 As wolves bounce back after nearly disappearing from the park, their presence as a predator on the island will help all wildlife thrive at Isle Royale.

But many consequences of the decreasing ice coverage and warming summer water temperatures are already apparent: a shrinking habitat for cold-water species; toxic blue-green algae blooms, which were documented for the first time in Lake Superior in 2012; increased damage to and erosion of shoreline because it is less protected by ice from powerful winter storms; and a significant reduction of ice bridges between the mainland and islands, important corridors for wildlife, especially American martens and wolves. At Isle Royale National Park, which sits roughly 18 miles off the Minnesota shoreline, ice bridges that allow wolves to travel to and from the archipelago are no longer consistently forming. The result has been a more isolated, inbred wolf population, a problem the National Park Service and collaborators have been working to mitigate through a wolf restoration plan.

All five U.S. national park sites in or bordering the lake — which has a shoreline that extends more than 2,700 miles across Minnesota, Wisconsin, Michigan and Ontario — are experiencing the environmental consequences of disappearing ice. At the same time, winter recreational opportunities, and a way of life, are also changing.

At Pictured Rocks National Lakeshore in Michigan’s Upper Peninsula, the Michigan Ice Fest, a 30-year-old event that attracts world-class ice climbers, has moved from January to mid-February. “We used to start climbing in early December,” said festival organizer Bill Thompson. “This year climbable ice has only been around since late December.”

We commonly see over 16-inch-thick ice break apart and blow out to open water in as little as two hours.

“Ice is never safe,” said Apostle Islands National Lakeshore ranger Mark McCool, “but it can be low risk.” Before the park allows the public out on the lake to view the caves, McCool’s Ice Rescue Team, a group of 10 park employees, needs to ensure the ice’s relative safety. To do so, they use satellite imagery to find ice trigger points. If the ice looks solid enough, they travel out on it to drill holes and test its quality over a period of 10 days while simultaneously checking forecasts and future wind speed and direction. Since 2014 the team has classified the ice as “low risk” only twice.

“We commonly see over 16-inch-thick ice break apart and blow out to open water in as little as two hours,” said McCool. “If the ice breaks apart with potentially thousands of people in Lake Superior without the resources to help them, the consequences could be disastrous.”

Despite sporadic days with subzero temperatures in early winter, the opportunity to see the caves this year was looking increasingly unlikely as of January, when NOAA’s predictions for maximum ice cover was 52.3%. “During years when we had ice caves, ice cover was over 90%,” Van Stappen said.

Given the impossibility of Option A, my partner, Brian, and I went for Option B: On a balmy, 21-degree Saturday in January, we snowshoed 2 miles overland along the Lakeshore Trail. At Meyers Beach, just below the trailhead, a narrow ring of ice hugged the shoreline. A 25-mph wind was whipping up white caps on the lake, and small shards of ice bobbed in the rollers.

On the trail, we passed a handful of other hikers, most of them trekking through a foot of snow in the peaceful forest. At mile 1.8, we reached the Crevasse, a fracture that recedes 100 yards into the shoreline bedrock. Slipping off the icy edge could lead to a 50-foot freefall into the frigid abyss of Lake Superior. We trudged over to a safer position on the opposite side of the crevasse just in time to catch a ray of sun piercing through a gap in the red sandstone cliff below us. The gap lit up like a burning inferno, and the surrounding daggers of ice, suddenly backlit by the light, seemed to glow. Even from a distance it was stunning, but I couldn’t help but wonder what it would have been like to stand inside the ethereal, crystalline caves as sunlight ricocheted through them. 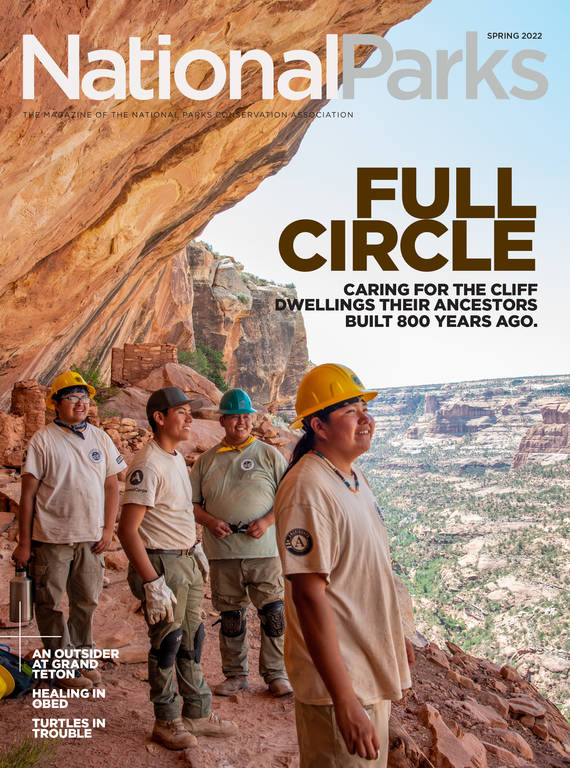