By Jacob Baynham
Summer 2021: Mossing Around

Why while away retirement on the golf course when you could become a moss expert and hunt down some of the least studied plants in New Mexico’s national parks?

When Russ Kleinman retired from a 27-year career as a general surgeon, he didn’t imagine he’d start rappelling into ice caves. He couldn’t have foreseen that microscopes would displace the cutting boards in his kitchen, and he never guessed that he’d be publishing peer-reviewed papers in botanical journals. But that was before he discovered “mossing.”

Summer 2021 Mossing Around Kleinman and Blisard 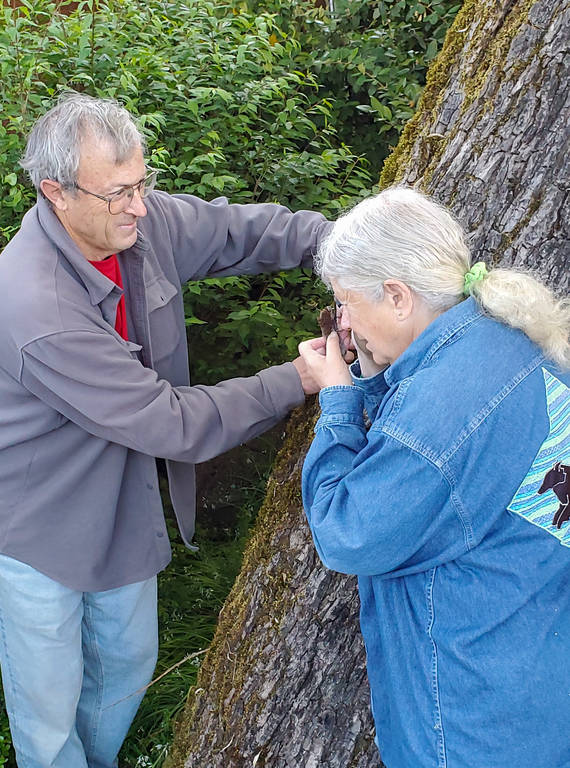 “Russ does not know how to do anything halfway,” said Karen Blisard, his wife of 40 years. “Moderation is not his middle name.”

Mossing, officially known as bryology, is the study of bryophytes — mosses, liverworts and hornworts. Bryophytes, which reproduce through spores and lack a traditional vascular system to distribute water and nutrients, are some of the planet’s oldest land plants. They favor cool, damp climates and are found around the world. Bryophytes are difficult to identify, however, and most don’t have common names. Even professional botanists often overlook them. Yet, in a decade of fieldwork that has included exhaustive inventories of three national parks, Kleinman and Blisard have collected thousands of specimens and documented more than 200 unique mosses and several dozen liverworts in New Mexico. Some of these plants were previously unknown in the state.

Kleinman’s descent into bryology began with an interest in the wildflowers, trees and shrubs that he saw while backpacking around the Gila National Forest near his home in southwestern New Mexico. Once adept at identifying the larger vascular plants, he progressed to grasses. Then, in 2010, he met Kelly Allred, one of New Mexico’s preeminent botanists.

“Kelly told Russ that if he knew five mosses, he would be one of the top bryologists in the state,” Blisard recalled.

“How can you ignore that challenge?” Kleinman said.

Intrigued, Kleinman signed up for an annual botanical retreat with some of the country’s top bryologists. Allred was there, too. The group spent their days prying mosses from limestone cliffs in New Mexico’s Sacramento Mountains. In the evenings, they identified what they’d found. Different species of mosses and liverworts can look identical to the naked eye, and even under a magnifying glass. The only sure way to identify a bryophyte is with a microscope. Allred gamely stayed up into the early hours of the morning teaching Kleinman how to differentiate cellular structures under the scope.

Kleinman was mesmerized. The specimens were filamentlike — most moss leaves are only one-cell thick — but under the scope their intricate beauty was laid bare. The cells of a Funaria hygrometrica looked like a mason’s handiwork. Cells of the brachytheciaceae family brought to mind a tangle of skinny worms. Others resembled woven baskets, or reptilian scales.

Blisard soon contracted her husband’s passion for bryophytes, made liverworts her specialty and became his partner in crime. Liverworts are plants that either have leaves without a midrib or are flattened and resemble ribbons, and Blisard grew to love identifying them under the microscope, especially Radula complanata, whose unfurling leaves reminded her of a Chinese fan. The microscope work was a natural fit for Blisard, who, as a pathologist, spent 29 years analyzing biopsies of tumors or other tissues removed from the bodies of patients.

“It’s helpful to know your way around a microscope,” she said. “And what’s nice about bryophytes is if you’re wrong, nobody dies.”

Allred said bryology is more accommodating to hobbyists than almost any other scientific discipline. While Ph.D.-level bryologists might study the genetic makeup of bryophytes, Allred said, the collection and identification are often done by nonprofessional scientists. One of the top bryologists in California was a commercial air conditioning mechanic.

“In the hard sciences, physics and all that, no amateur is paid any attention,” he said. “In the history of bryology, amateurs have pretty much ruled the field.”

Russ Kleinman, a late-blooming moss aficionado, discovered this moss, Schistidium rivulare, in the Pinos Altos Range in New Mexico in 2015.

To shore up their identification skills, Kleinman and Blisard started collecting all the bryophytes they could find. In 2010, they got a National Park Service permit to inventory the bryophytes at Gila Cliff Dwellings National Monument. Later, Kleinman and Blisard spent five years cataloging mosses and liverworts at Carlsbad Caverns National Park. They published both studies in a peer-reviewed bryology journal.

Most recently, Kleinman, 66, and Blisard, 69, Allred and fellow mosser Kirsten Romig joined Laura Baumann, the biological science technician at El Malpais National Monument, to conduct a bryophyte inventory of the western New Mexico park. The fieldwork was grueling because much of the park is covered in uneven volcanic rock.

“It’s like hiking on jagged glass,” Kleinman said. “At the end of the project, the soles of our boots looked like they’d been ripped on by a Rottweiler.”

Moss is so adversity-tolerant that it can be hard to determine when it is actually dead. Under poor environmental conditions, mosses enter a state of dormancy, or cryptobiosis. Even after prolonged drought, moss can spring back to life with a few drops of water. In 2004, a moss sample from Antarctica was resurrected in a laboratory incubator after being frozen for more than 1,500 years.

When lava erupted from volcanic vents there — as recently as 2,500 years ago — it created a warren of subterranean caves and unique microhabitats for mosses. Despite the sunbeaten desert landscape on the surface, these caves are home to the southernmost perennial ice in the continental U.S.

“It’s basically like being in a refrigerator,” Baumann said. “Right at the entrance of some of these caves, where we get some sunlight, we end up with these big, lush moss gardens where you kind of expect to see fairies floating around.”

Baumann said this inventory establishes a baseline understanding of the diversity of the park’s bryophytes and helps explain their role in the complicated and fragile cave ecosystems. “We can’t protect what we don’t know,” she said. “As conditions on the surface get warmer and drier, the caves will become warmer and drier, and we’ll start to lose those special microclimates. There are all these cascades that happen in ecology. It’s not usually one thing that goes. You take out one brick, and the wall starts to crumble.”

Baumann taught Kleinman how to rappel down into these ice caves to collect hard-to-reach mosses. From 2016 to 2019, Kleinman and Blisard collected over 1,200 bryophyte specimens at El Malpais. After painstakingly identifying each one under their kitchen microscopes, they found 110 species, including six that are new to the state. Most of these specimens are filed away in an herbarium — essentially a plant library — at Western New Mexico University.

Although they’ve made significant contributions to bryology in New Mexico, some goals remain elusive. Whenever they’re out mossing, Kleinman and Blisard are searching for a hornwort — a bryophyte that grows narrow, hornlike reproductive structures. No one has ever found one in New Mexico, although they grow in neighboring Arizona and Colorado.

“Hornworts are one of the Holy Grails of this area,” said Blisard. “Whoever finds one will be really famous among a very small group of people.”