The Anniversary of Superstorm Sandy

Exactly one year ago today, Superstorm Sandy made landfall in the New York metropolitan area, leaving a trail of destruction in its wake.

The National Parks of New York Harbor, including the Statue of Liberty, Ellis Island, Governors Island, and Gateway National Recreation Area, felt the brunt of Sandy’s wrath, with Gateway alone sustaining $180 million worth of damage. The storm forced the Statue of Liberty to close just one day after it had reopened following a year of renovations—a particularly demoralizing symbol of how hard the disaster had hit the region.

But then, something unusual happened after the storm: In a rare show of bipartisan solidarity, President Barack Obama and Governor Chris Christie of New Jersey came together to assess the damage, each praising the other for his response to the crisis. This was followed by an even less common occasion: congressional Republicans and Democrats in the region united in response to pressure from advocacy groups, including NPCA, and ended 78 days of gridlock to approve a historic funding bill for rebuilding communities and national parks after Sandy. A Sandy task force was established to break down the silos that often plague federal agency work and implement a coordinated rebuilding strategy for the region. 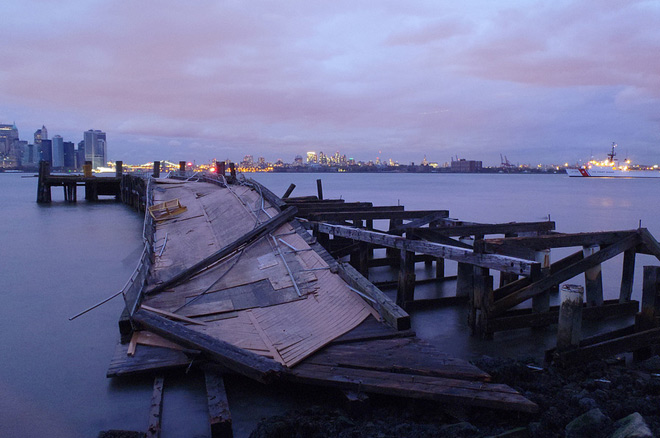 The exceptional government collaboration in response to Sandy has benefited national parks, which are themselves shining examples of American unity. With guidance from the Sandy task force, the Department of Interior allocated $475 million in critical funding to rebuild national parks, refuges and other assets. Another Sandy task force member, the Army Corps of Engineers, allocated $500,000 toward a restoration study at Gateway’s Jamaica Bay unit. This is just one of several projects the Corps will implement at the park in partnership with other agencies as part of an unprecedented effort to integrate “green resiliency”—environmentally sensitive projects that prevent vulnerability to future disasters—into existing rebuilding plans. The city of New York, which had formalized a plan to jointly manage Jamaica Bay with the Department of Interior even before Sandy, strengthened this commitment, incorporating Jamaica Bay into Mayor Michael Bloomberg’s $20 billion storm protection plan. But perhaps the greatest symbol of collaboration occurred on July 4, 2013, our nation’s birthday, when Mayor Bloomberg, Secretary of Interior Sally Jewell, Park Service Director Jonathan Jarvis, and other elected officials convened to celebrate the reopening of the Statue of Liberty.

Government officials are now supporting efforts to bring a variety of groups together to improve the region’s national parks. Last week, Secretary Jewell announced additional funding for national parks impacted by Sandy, including a $3.6 million investment in a science and resiliency center at Jamaica Bay, which will bring together academics, nonprofit organizations, businesses, and the public to study innovative ways to tackle climate change in urban communities. Today, Secretary Jewell will further facilitate multi-stakeholder coordination in the recovery effort by offering $100 million in grants to agencies, academics, nonprofits, and individuals for post-Sandy public lands work.

The response to Superstorm Sandy is a textbook example of how our national parks benefit from increased collaboration, especially by our government leaders. It is unfortunate that it took a natural disaster to increase federal funding for national parks like Gateway, which has lacked this level of serious investment for decades. It’s time for our elected officials to end the “habit of governing by crisis,” a remark made by President Obama after the recent government shutdown. Congress can begin to kick this habit by putting an end to the drastic funding cuts to the National Park Service budget. These cuts are forcing park officials to reduce visitor hours, cut educational programs, and close campgrounds, all of which diminish the visitor experience and hurt gateway communities that depend on national parks.

The National Parks of New York Harbor will recover from Superstorm Sandy stronger and more resilient than ever, but we shouldn’t have to wait for the next disaster for our leaders to do the right thing.