By protecting the areas surrounding national parks, the U.S. can build resilient landscapes that prevent the worst effects of climate change and species loss.

Cajon Pueblo, part of Hovenweep National Monument in the Four Corners region of Utah, is illuminated by the faint light of the stars. Visible on the horizon are lights from oil and gas along the Navajo Reservation.

National parks are at the forefront of the climate crisis, warming at twice the rate as the rest of the country and enduring severe threats to the very things that make them special, from their glaciers to their historic artifacts to their beloved namesake trees. But many national parks are also part of broader landscapes that can help the U.S. fight climate change and species loss — if we act soon to protect them.

Experts agree that we must preserve 30% of our lands and waters by 2030 around the globe to defend against the worst effects of warming temperatures and threats to biodiversity. Americans already know how special our national parks are. It makes sense for some of these incredible places to serve as cornerstones for larger preserved regions.

The Biden administration has embraced this conservation goal, known as “30 by 30,” and NPCA is calling on the federal government to help meet this goal by protecting a number of imperiled national park landscapes — including these seven.

1. The Bear Coast of Alaska

A brown bear mother and cub on the Alaska Peninsula, part of the Bear Coast. 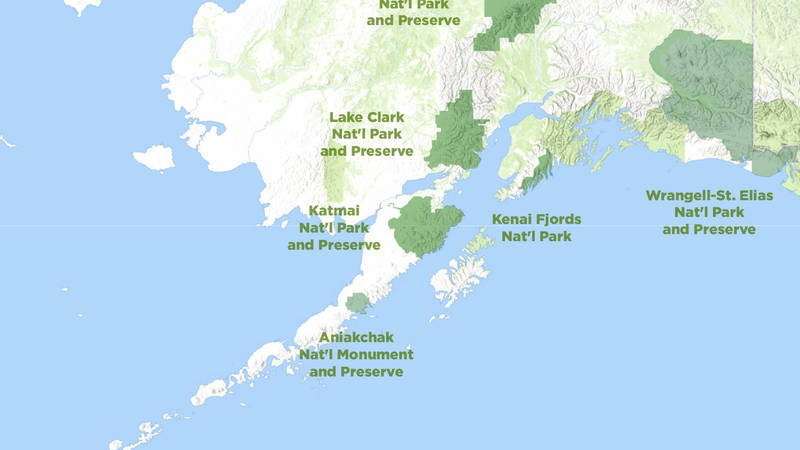 Southwest of Anchorage, the Kenai, Katmai and Alaska Peninsulas are world-famous for their wildlife, boasting the highest density of brown bears in the world. This vast and rugged area includes two crown jewel national parks, Katmai and Lake Clark, as well as the most remote of hidden gems, Aniakchak National Monument, which consistently ranks as the least-visited national park site in the country. Yet despite national and state park designations protecting much of the land, the Bear Coast is under severe threat from climate change. Record-breaking, above-average ocean temperatures were the likely cause of a massive seabird die-off in and around the Gulf of Alaska in 2015 and 2016 during which a variety of bird species starved as the cold-water zooplankton and fish they depend on for food relocated. Meanwhile, potential mines in and near the region, such as the proposed Pebble Mine, would run a high risk of polluting the landscape and could be a potential disaster for the region’s people and the salmon that bears and other wildlife depend on. By connecting the parklands together, building up community and improving protections in the area, we can protect people and help buffer the land, water and wildlife from the effects of dramatically warming temperatures and the changing world that we live in.

2. The Greater Everglades Region of Florida

Storm clouds form over Lake Okeechobee in Florida, the heart of the Greater Everglades Ecosystem. 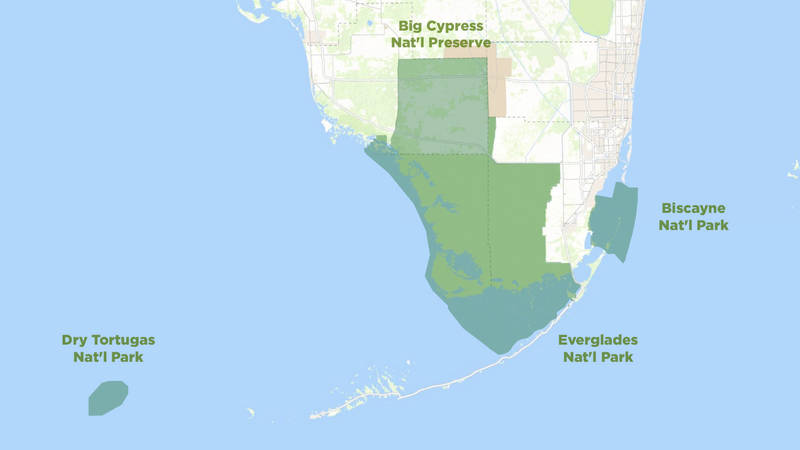 The Greater Everglades Ecosystem once stretched from the Kissimmee River near modern-day Disney World down to the Florida Keys, encompassing an area twice the size of New Jersey. But now, due to widespread development and industrial agriculture, roughly half of this historical paradise has been drained, dredged or paved, and the water that once flowed naturally south, nourishing the peninsula, is diverted to the Atlantic Ocean and the Gulf of Mexico, causing constant drought for the parks, plants and wildlife at the southern tip of the state. But acquiring and restoring more land between Lake Okeechobee and Florida Bay would store more fresh water, allowing it to flow into Big Cypress National Preserve, Biscayne and Everglades National Parks, and the waters of the Florida Keys National Marine Sanctuary, improving the quality of the water, protecting the area’s famed biodiversity, and defending the region from the effects of climate change. South Florida is especially vulnerable to storm surges, sea-level rise and pollution, and actions to protect national parks would benefit the region’s millions of residents, too.

3. The North Cascades of Washington

A sunset in the North Cascades region of Washington. 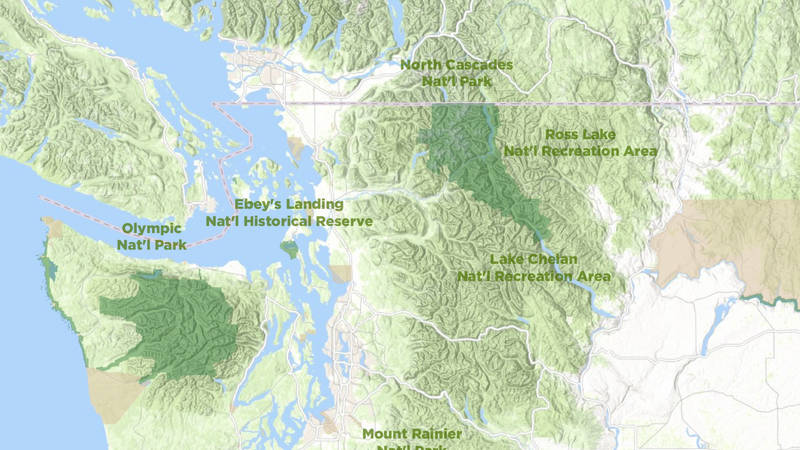 The North Cascades is one of the most rugged, glaciated landscapes in the Lower 48, with old-growth forests and the Skagit River, an important habitat for all five species of Pacific salmon, flowing through the heart of the region. These 6 million acres are so wild, they are one of the few remaining places where grizzly bears can live, and NPCA and the National Park Service want to restore the species to this landscape to help its recovery. Yet the region is also within a couple of hours’ drive of Seattle and Vancouver and offers accessible recreation to millions of people. However, a proposed copper mine in British Columbia could harm the headwaters of the Skagit River, affecting the many people and fish that depend on this ecosystem, including First Nations in Canada, Native American tribes, outdoor enthusiasts and the city of Seattle, which uses the river for hydroelectricity. Preserving the integrity of this landscape would have significant benefits for people, water and wildlife throughout the region.

4. The Calumet Region of Illinois and Indiana

A steel mill in Riverdale, Illinois, located along a bend in the Little Calumet River. 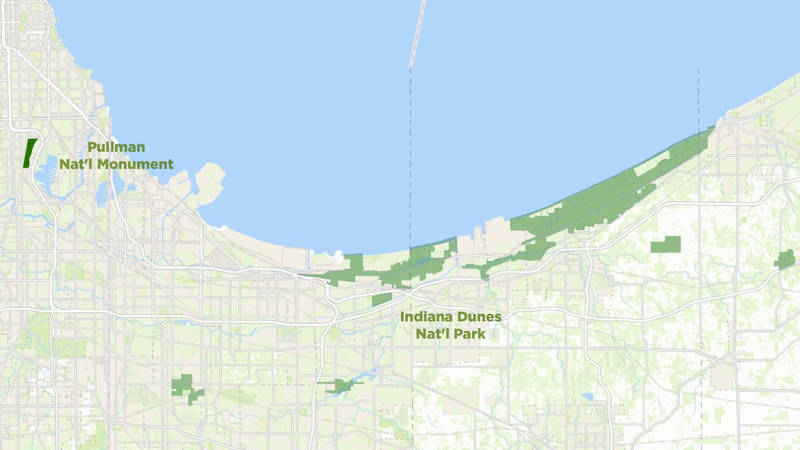 Between Pullman National Monument in Chicago and Indiana Dunes National Park near the southern tip of Lake Michigan lies a 50-mile patchwork of isolated natural areas, industrial development, lakefront beaches and low-income neighborhoods. NPCA is part of a coalition of local and national partners, including Chicago’s Field Museum and several environmental organizations, to conserve this 61,000-acre region, linking parts of the Calumet River and a host of now-scattered green spaces with trails. This would offer more access to recreation and local history for people who live in the community and provide cleaner water, more trees and better-connected wildlife habitat throughout the region. This would not only benefit the millions of people in the region, it would also help protect Lake Michigan — where the surface temperature has been rising at an alarming rate — from climate change.

5. The Four Corners Region of Utah in the Colorado Plateau

The Twin Towers at Hovenweep National Monument in the Four Corners region of Utah. This area is part of the broader Colorado Plateau, known for its dark skies and natural beauty. 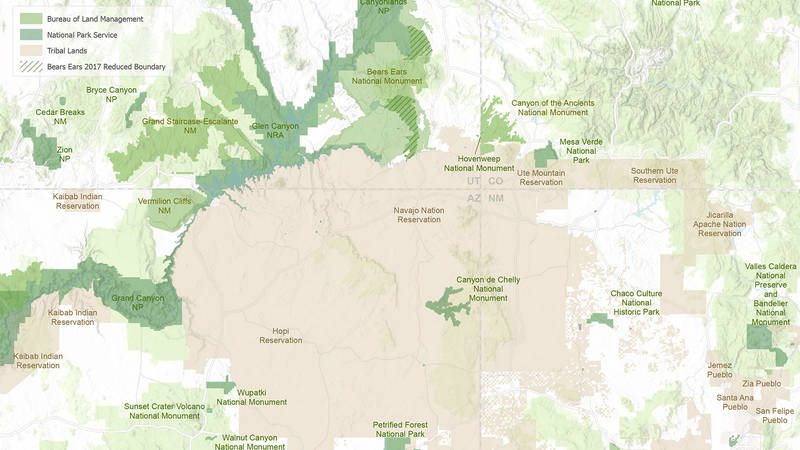 The Four Corners region of the Colorado Plateau (click to enlarge)

Between Bears Ears, Canyons of the Ancients and Hovenweep National Monuments in southeast Utah are the traditional lands of the Hopi, Zuni, Rio Grande Pueblos, Ute, Navajo, Paiute and other Indigenous people. This region is part of a larger, contiguous plateau that connects many other public parks — and is one of the most archaeologically rich landscapes in the country. Yet between 2018 and 2019 alone, 100,000 acres in this area were leased for oil and gas development, a practice that increasingly industrializes the landscape and threatens its dark skies, expansive views, cultural and scientific artifacts, and tourism economy. If we do not act, the Bureau of Land Management will continue to allow energy development near established national parks and in areas with known Tribal and archaeological significance. NPCA is part of a broad coalition that has asked the Biden administration to pause new leasing in the area and is working to identify long-term protections based on the direction and leadership of the region’s Tribes. 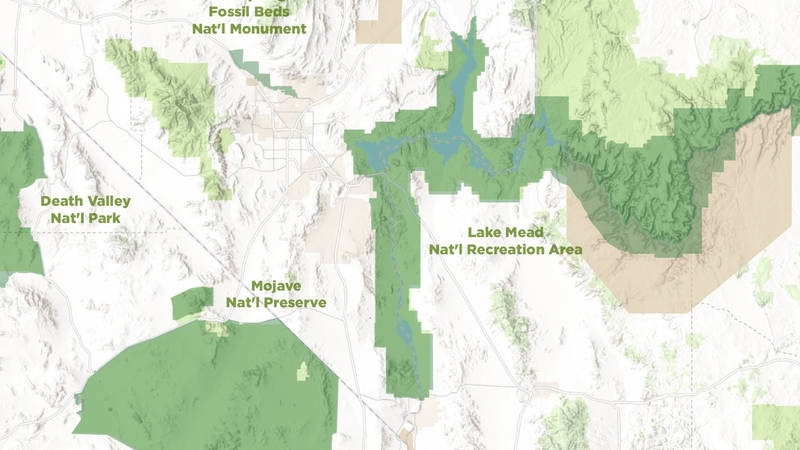 A new national monument in southern Nevada would permanently protect some of the most visually stunning, ecologically diverse and culturally significant lands in the Mojave Desert, including Avi Kwa Ame, or Spirit Mountain, a culturally significant peak that is sacred to the area’s 10 Yuman-speaking tribes, as well as the Hopi and Chemehuevi Paiute. The area’s unbroken natural landscapes contain lush desert vegetation, rich biodiversity and an essential corridor that connects Mojave National Preserve, Castle Mountains National Monument, Mojave Trails National Monument and the Dead Mountain Wilderness Area in California with Lake Mead National Recreation Area in Nevada. This high-quality contiguous habitat will help numerous Mojave Desert species survive in the face of long-term environmental changes, such as rising temperatures and shifting precipitation levels caused by the climate crisis. A new monument will also protect important Native American cultural sites and allow associated tribes to play a role in managing their sacred lands. 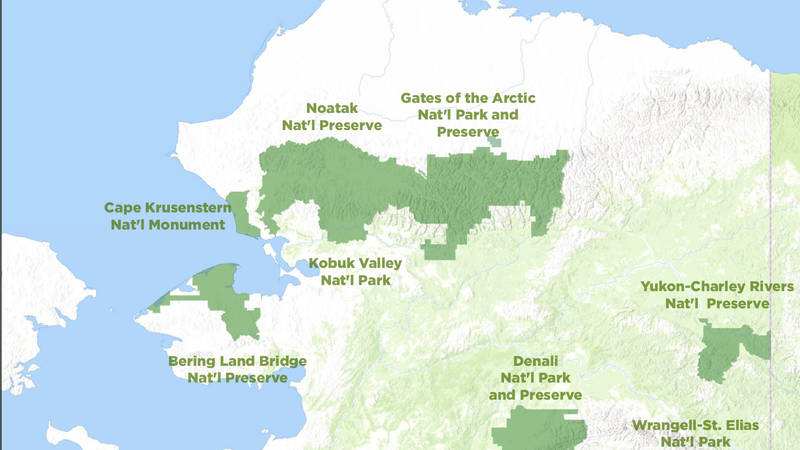 The Western Arctic Caribou Herd is one of the great wildlife wonders of the world. These 250,000 animals travel over 2,700 miles each year across jagged mountains, meandering rivers and vast expanses of tundra. Dozens of nearby small, mostly Alaska Native communities rely on the herd for food and for the continuation of their subsistence culture. It is the second-longest land migration in the world and the equivalent of walking from Seattle to Miami. Three national parks in northwest Alaska form the heart of this caribou habitat: Gates of the Arctic, Kobuk Valley and Noatak. But this 16-million-acre stretch of contiguous parkland and the lands surrounding it are experiencing dramatic impacts from climate change and could soon be fragmented by a proposed 200-mile mining road that would pave one of wildest parts of the country. By keeping the land between these parks intact, we can continue to preserve this remarkable wildlife migration and protect the region from damage due to inappropriate development and warming temperatures.