A third-generation stone carver, Nicholas Benson has left enduring marks on some of the park system’s most iconic monuments.

In 1705, John Stevens, a mason originally from England, founded a shop in Newport, Rhode Island. The John Stevens Shop, which the Stevens family helmed for several generations, produced gravestones and other custom stone artifacts for around 200 years, moving across Thames Street to its current location around 1800. Then in 1927, John Howard Benson, a sculptor by training, bought the business, teaching himself the craft of lettering. His son, John Everett Benson, took over in 1963 and ran the shop for 30 years. That’s when Nicholas Waite Benson was handed the reins. A master carver like his father and grandfather, he is the owner and creative director of the shop, one of the oldest continuously operating businesses in the country.

Father and son (John and Nicholas Benson) photographed in 2007 inside the John Stevens Shop, which was founded more than 300 years ago.

One morning in November, Benson sat casually on a countertop in his workshop. Sun spilled through the big windows onto cups of brushes, rows of mallets and paper mock-ups of gravestone designs. Tabletop-sized pieces of slate leaned against wood beams. Hung on one wall of the meticulously organized workspace was a portrait of Benson’s grandfather, who revived techniques pioneered by Roman artisans around 2 A.D. Those methods, which Benson still employs, entail painting letters with a broad-edged brush directly onto stone, then chiseling them out in what’s known as a “V-cut” cross-section, for the wedge-shaped gullies that form the lines of each character.

“My father built on my grandfather’s lettering, and I continued to do that,” Benson explained. All three also studied the art form extensively, “so we have a lot of academic knowledge about the history of letterform.”

Locally, the Benson family’s work adorns stone markers at Newport’s Common Burying Ground and Island Cemetery. But over decades, their hand-hewn text has found a grander stage on various national monuments and memorials, many of them in the National Park System. Benson’s grandfather carved his marks on the Marine Corps War Memorial in Arlington, Virginia. His father’s first job after inheriting the shop — at 26 years old — was inscribing John F. Kennedy’s gravesite in Arlington National Cemetery; he later worked on the Franklin Delano Roosevelt and Vietnam Veterans memorials in Washington, D.C. Benson did lettering for the World War II Memorial in Washington, which was dedicated in 2004, and half a dozen years later, cut words on the towering Martin Luther King, Jr. Memorial, also in the U.S. capital. (One of the lines he carved, from King’s “drum major” sermon, became the subject of a controversy after poet Maya Angelou, among others, raised objections because it was a paraphrase. Sculptor Lei Yixin later carved striations into the monument’s side to erase the inaccurate text.) Most recently, Benson and a small team inscribed quotations at the Dwight D. Eisenhower Memorial, a 4-acre park near the National Mall designed by architect Frank Gehry and dedicated in September. 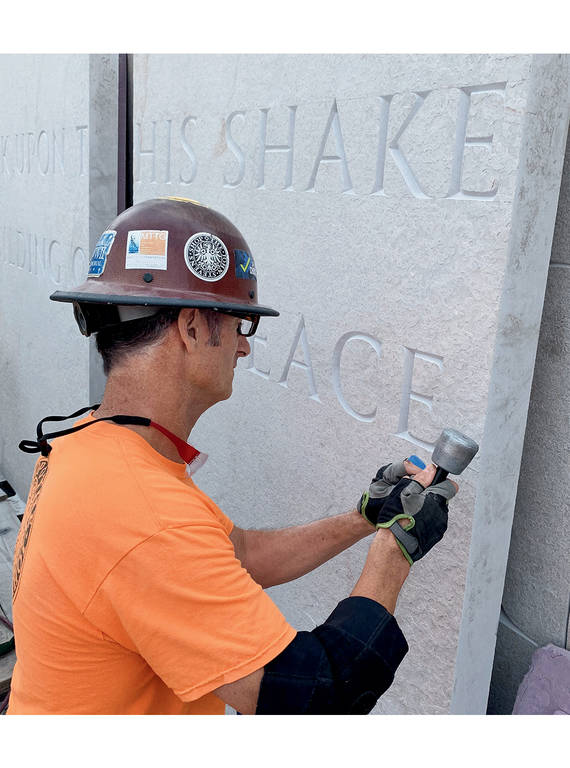 Benson working on the Dwight D. Eisenhower Memorial in Washington, D.C., which was dedicated last year.

At 56, Benson is energetic, with a laborer’s wiry build. His loose, roaming conversational style stands in contrast to his work mode, which demands an almost insane level of patience and focus. Tapping out fluid strokes with a mallet and chisel, he’s lucky if he carves a couple dozen 2-inch characters a day. On projects that require bigger characters, it’s more like 15. That pace can leave digital-age observers befuddled.

“Some people don’t see value in what I’m doing. They say, ‘You got hundreds of thousands of typefaces out there, and CNC machines that can make V-cut lettering,’” he said, referring to computer-controlled carving technology. “‘Why are you doing this?’”

The answer, in part, lies in the satisfaction of doing challenging work, but also in the letterforms themselves. Depending on the project, some are tapered and lean, while others loop in calligraphic swirls. They are elegant and imposing at once. And his characters have, well, character. Machines simply can’t replicate the subtle inconsistencies of hand-wrought work that, as Benson describes it, provide evidence of a human endeavor.

“Nick’s work is exquisite,” said Marjorie Hunt, folklife curator at the Smithsonian Center for Folklife and Cultural Heritage. “What I would underscore is the fact that he combines hand-designed work with hand-carved work.” In addition, Benson’s grasp of design gives his layouts a unique coherence, said Hunt, who met Benson in 2000 while doing research. She later featured him in “Good Work: Masters of the Building Arts,” a documentary she co-directed. “People don’t realize the skill and knowledge involved,” she said. “All you see is this incredibly beautiful lettering.”

In typography circles, at least, Benson’s talent is well known. When the need arises, famed architects seek him out. He’s received a National Endowment for the Arts National Heritage Fellowship, and in 2010, he was awarded a prestigious MacArthur Fellowship — a so-called “genius grant.”

Like his father, Benson began apprenticing in the shop when he was 15. By 18, he was carving for clients. He went on to Purchase College, State University of New York, majoring in drawing and design. He further honed his aesthetic sensibility during a year in Switzerland, where he studied calligraphic and typographic design at the Basel School of Design.

For all its conceptual trappings, Benson’s work is ultimately physical, and chiseling rock for 40 years has taken a toll. “Everybody’s like, ‘Do you have carpal tunnel?’ Yes, of course I have carpal tunnel,” he said. “Tendonitis, tennis elbow. All those things constantly plague the artisan.” His father, too, suffered wear and tear — including nerve damage in his hands from the pneumatic hammers used on big monuments, before the fine details are finished with chisels. People often ask Benson what he does about the aches, and he usually responds the same way: “Suck it up,” he said.

Benson aggressively pursued work on the new Eisenhower memorial, which interprets the former president’s roles as a statesman and general with bronze figures, bas-reliefs, inscribed walls and a steel tapestry depicting the cliffs of Normandy. “I was so interested in designing a typeface based on the neoclassical Roman lettering that’s all over D.C.,” he said. His visual touchstone, he elaborated, was the Lincoln Memorial, with its neat, clear blocks of justified text.

Benson formed a four-person crew — including a colleague from the shop and one carver he met through Instagram — and rented an apartment near the worksite. The number of words, selected from some of Eisenhower’s famous speeches, was daunting: just over 900, or around 4,500 characters. Each day, donning hardhats, he and the others hammered and chiseled slabs of specially quarried Spanish limestone. Even with pneumatic tools speeding things up, the carving took five months to complete. 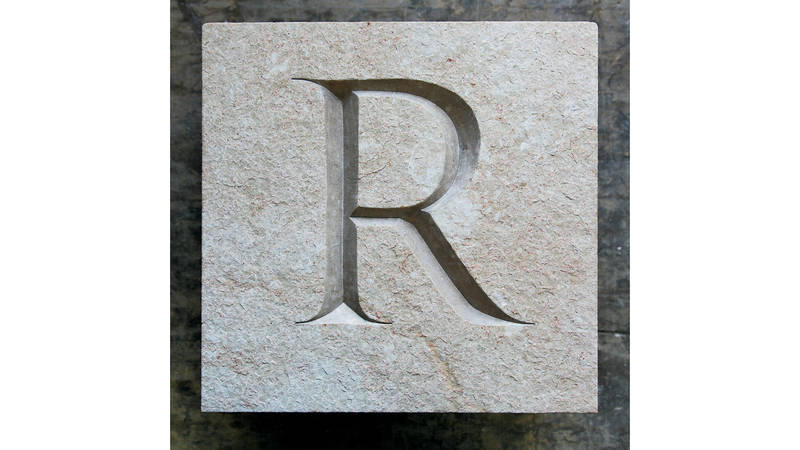 A sample letter for the Dwight D. Eisenhower Memorial.

Kristin Ragins, a senior associate at Gehry Partners LLP, which managed the memorial’s design over more than a decade of negotiations, said Benson’s hard work paid off. “It’s a very sculptural thing,” she said, “the way the sun creates a shadow and makes the letter pop out in the sunshine.” Her favorite inscription in the park, she said, is on the back side of the presidential wall, where long quotations from Eisenhower’s first inaugural address in 1953 and 1961 Farewell Address are featured side by side in mottled stone. “It feels like a piece of parchment, old but reverent,” she explained.

Since receiving the MacArthur grant, Benson has felt freer to pursue more artistic projects. At one point during the shop visit, he uncovered a large slate slab, revealing engraved rows of what looked like wild filigree, but was actually, he explained, a long string of computer code. In recent years, he’s become fascinated with capturing digital languages in beautiful, analog forms. “I’m taking something that may exist for seconds, in terms of its use,” he said, “and playing it against this thing that, if taken care of properly, will last for thousands of years.” He spent a year carving the slate piece, stealing time before workdays. He’s created similar works on paper, with thick fields of pen strokes that look like brambles.

Though painstaking artisan work can seem out of sync with a high-speed, disposable culture, Benson is hopeful about the enduring appeal of handmade things. His daughter, who is 21, recently began apprenticing under him. She has shown an entrepreneurial streak, cranking out ornamental pieces she sells via Instagram, but Benson said she’s reluctant to take on the stress of administrating the family business. Although Benson intends to keep at it for another decade or so, the fate of the shop beyond that is unknown.

For now, work at the shop is steady, Benson said, even if monument-sized jobs are mostly on pause due to COVID-19. Whatever the project’s scale, the struggle for perfection keeps him engaged. “There are instances when I’m doing a simple layout for a little marker stone and there’s some little stroke that I do, and I’m just like, ‘Ah, that’s excellent,’” he said. “Because it never stops being difficult. It’s always difficult.”