As the Robin Flies

By Nicolas Brulliard
Winter 2021: As the Robin Flies

Where do robins go and why does it matter?

The robin was hopping on the parking lot of the Denali post office, less than half a mile from Denali National Park’s entrance — and Emily Williams was desperate to catch it. American robins are a common sight on the North American continent, but this was not just any backyard robin. Williams, then an avian ecologist at Denali, had captured it a year earlier in the Alaskan park and had outfitted it with a GPS tag. The bird had likely traveled thousands of miles before coming back to the park, but without netting it and retrieving the tag, Williams would never know for sure.

“There is the key to so much data right here,” Williams said. “It’s so frustrating when you can see that bird with your binoculars, and you can’t catch it.”

Williams and a colleague would recover four tagged robins in Denali as part of a multi-location study. Collaborating researchers recovered one more robin in Amherst, Massachusetts, and two others in Montrose Park, an urban park managed by the National Park Service in Washington, D.C. The data from the birds’ GPS tags showed an incredible diversity of migration strategies, according to Alex Jahn, who was then a research fellow at the Smithsonian Migratory Bird Center and who coordinated the study. Some robins migrated more than 5,000 miles round trip, one traveled a leisurely 1,500 miles, and two pretty much stayed put. This flexibility could suggest that robins are able to adjust to evolving conditions such as rising temperatures and that tracking where the birds travel could provide early warnings of a changing environment, Jahn said.

The American robin – known by its Latin name as Turdus migratorius – exhibits a dizzying array of migration strategies.

“Obviously, the seasons are changing with climate change,” said Jahn, whose robin work is part of Indiana University’s Grand Challenges initiative, a program that includes studying preparedness for environmental shifts. “So we can start using these birds as sentinels of that change.”

Jahn was surprised to learn that though robins are ubiquitous, they had been relatively little studied and their migration patterns were poorly understood. The problem was a lack of data. For more than a century, scientists have studied bird migration through banding — they attach an aluminum band with a unique code to the bird’s leg — but this approach yields few data points as birds are rarely caught again, and the location of their capture could be anywhere along their migration path. Tracking devices were first used decades ago on large birds such as albatrosses, but it was only recently that technological improvements and advances in miniaturization made them suitable for birds as small as robins. 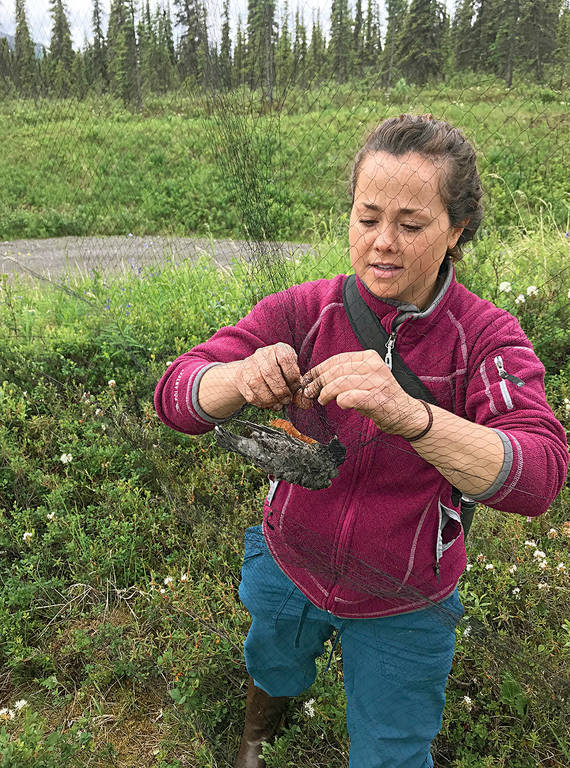 Emily Williams disentangles a robin from what is called a mist net at Denali National Park in June 2020.

To follow the migration of individual robins, Jahn and his colleagues catch the birds in large, fine nets and outfit them with GPS tags. The devices, which resemble miniature backpacks, weigh no more than 3% of the bird’s weight, and they must be retrieved to access the data. The researchers only selected breeding robins because they tend to be faithful to their breeding sites, so tagging them increases the likelihood of recapture.

Not all robins make it back from their perilous journey. “They could hit a window, or they could get killed by a predator or an outdoor cat,” Williams said. Some might decide to breed elsewhere. The robins that do return hold valuable data for researchers — if they are lucky enough to catch the birds. To improve her chances of recovering tagged robins, Williams used a wooden decoy and sound recordings to fool a robin into thinking a rival was intruding in its territory. It didn’t always work. “The robins wise up to what you’re trying to do very quickly,” she said.

Out of 31 tags, the scientists got seven back. The data showed that all four Denali robins headed east toward Canada in September, but then continued to different destinations — eastern Montana, northeastern Nebraska, northern Texas and western Oklahoma (the farthest point reached by any robin in the study at 2,801 miles). The robin tagged and recaptured in Amherst, Massachusetts, overwintered in South Carolina, while two robins captured in Washington, D.C., traveled no farther than 2.9 miles and 3.7 miles, respectively. A separate study of robins at a stopover site in Alberta, Canada, showed that they adjusted the timing of their migration to coincide with the earlier onset of spring at northern latitudes and that their migratory path was strongly influenced by snow conditions along the way.

While many of Denali’s birds head south for the winter, Canada jays (above) stick around. The gray birds depend on central Alaska’s subfreezing temperatures to preserve the perishable food such as berries and carrion that they store away in bark crevices and other hiding spots. The problem is that Alaska is getting increasingly warmer and that thawing spoils the food that the jays count on during the long winter. “The big question is how will climate change impact these birds,” Williams said. “Something like animal flesh is not going to last that long if temperatures rise.”

These changes in migration patterns may have far-reaching consequences. Robins, like other birds, carry seeds and could help tree and plant species expand their range northward in response to a warming climate. But robins can also carry Lyme disease and can potentially propagate the disease much faster than deer and mice, said Jahn, who checks the robins he catches for ticks and routinely takes blood samples to detect signs of infection. Much more research is warranted to understand the factors at play, but eventually monitoring robin migration could help public health officials and wildlife managers anticipate the arrival of Lyme disease and other infections such as West Nile virus in new areas and possibly mitigate the impact of outbreaks.

“Any animal that might be exporting a new disease into Denali is something we’d be concerned with,” said Carol McIntyre, a wildlife biologist at Denali who has studied the park’s birds for decades.

Using birds as true sentinels of change will require a lot more eyes — and tags. McIntyre and her staff at Denali have been tagging several bird species, including blackpoll warblers, hermit thrushes and Swainson’s thrushes, as part of a multi-year project called Critical Connections. Long-term studies suggest some bird populations in Denali are decreasing, so one of the goals of the project is to figure out what is happening along the birds’ migratory paths that might be contributing to these declines.

“Most of the birds that nest in Denali are migratory,” McIntyre said. “Our efforts to study and protect them need to extend well beyond the boundaries of the park.”

Jahn is planning to expand robin tagging to other locations, such as Ontario, and he hopes to develop a citizen science program. Robins are particularly well suited for observations in urban environments as they’ve come to rely on mowed lawns to get their worms. “We’re creating this habitat that robins just love,” he said.

Williams is not done with robins either. She left her position at Denali and drove cross-country over the summer to Georgetown University in Washington, D.C., where she started working toward a Ph.D. in biology focused on robin migration. She hopes to collaborate with researchers across the country and to outfit robins with a new generation of tags that continually send data to the International Space Station, which then sends it back to scientists for analysis. The tags record a lot more information than the ones Williams has been using, and they could potentially function through the life of the birds. Also — crucially — they don’t require researchers to recapture the birds to access the data.

“It’s going to be a game changer for a lot of reasons,” she said.

As for that robin on the parking lot of Denali’s post office, Williams could see the tag on its back but couldn’t herd it toward the net she and her colleague had placed nearby. After a few fruitless hours, they had to let that one go, and Williams, busy with other duties, never got another opportunity to look for it. More than a year later, the invaluable data is lost, but the regrets remain.

“I think we would have gotten that bird if we had spent more time on it,” she said.

Wranglers of the West