A former national park ranger shares how staff and partners at Timpanogos Cave are bringing the dark-sky experience to thousands of people in the most populous part of Utah.

Telescopes set up for a dark-sky program at Timpanogos Cave National Monument.

Courtesy of the National Park Service

Earlier this fall, Timpanogos Cave National Monument became the first national park to be recognized by the International Dark-Sky Association as an Urban Dark Sky Place — and only the second site in the world to receive this designation. 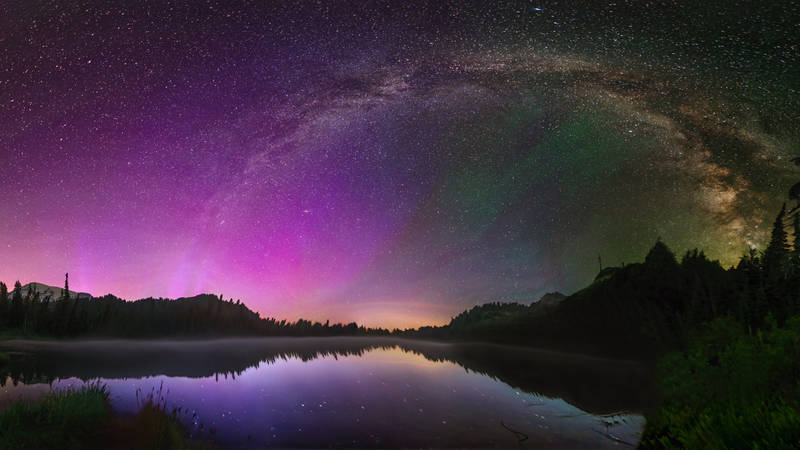 Urban Stargazing: See More of the Universe at Night

Longer nights and clearer skies during winter make it an ideal season for stargazing, and fortunately, some national parks offer dark skies near major urban areas.

The distinction recognizes parks near major cities with community programs “whose planning and design actively promote an authentic nighttime experience in the midst of significant artificial light,“ according to the association.

Timpanogos Cave is just 35 miles south of Salt Lake City and a short drive into the mountains from Utah’s Wasatch Front. This area is home to two-thirds of the state’s population, and the park is easily accessible to millions, including me and my family.

The popular night sky programs at Timpanogos Cave have allowed thousands of visitors to see the stars — an increasingly uncommon experience the world over. Park outreach and educational programs also show people how they can help preserve the night sky where they live by reducing light pollution in their own backyards.

If you have never heard of this incredible park, you’re not alone. Unlike other national parks in my state, such as Arches and Zion, out-of-towners tend to find it by accident. It’s a different story for people from northern Utah, who cherish and visit it regularly. It has an important place in the community.

The night sky at Timpanogos Cave National Monument, which received a designation as an Urban Dark Sky Place in September 2020.

I am one of thousands of kids who toured the cave on a school field trip, and years later, the experience was part of my inspiration to become a national park ranger. Many locals serve as seasonal rangers at Timpanogos Cave, and I was also fortunate to spend four summers working at the park and giving tours of the cave I enjoyed as a kid.

The central feature of the park is a rare alpine cave that formed in the side of a mountain. You do not descend into it; you climb a steep trail to enter it. The cave formed on a fault line, resulting in a series of very tight spaces displaced in the rock. As a result, the cave does not have the roomy feel of a place like Carlsbad Caverns or Mammoth Cave. You can see formations like stalactites and cave popcorn at closer range than in other caves.

The cave is especially known for its spiral-shaped formations called helictites, which look like ramen noodles descending from the ceilings. (Seriously.) And the presence of metals and minerals results in vivid greens, yellows, purples and reds throughout the cave.

Any cave ranger will tell you the moment visitors love — and sometimes fear — most on a tour is when you turn off the lights. Experiencing natural darkness — a vital ecological condition for cave life — is rare and memorable. Watching people react so strongly to “lights out” in the cave piqued my interest in darkness more generally.

In the summer of 2015, I started Timpanogos Cave’s night sky program with the help of a couple of fellow rangers at the Park Service and the Forest Service and the collaboration of a local astronomy club. The program was one of a number of programs designed to expand access to the park. Most of the people who visit the site come for the cave, but it can only accommodate so many human visitors a year. By simply being in a cave, people alter the environment — their body heat elevates the temperature and breathing changes humidity levels. We wanted to keep serving the community by offering more ways to experience the park that would not degrade the main attraction.

The cave is located in the middle of a national forest, and by partnering with Forest Service staff, we were able to find an elevated location that could accommodate large groups of people and offer an excellent view of the sky. Our local astronomers brought telescopes and invaluable knowledge to every event. The park had no telescopes at the time, and only has one now, so the idea simply could not have gotten off the ground without them.

This group of partners quickly became fervent community advocates for our dark skies. At our programs, we looked at constellations, planets, nebulae and other features of the cosmos, and we focused on educating visitors about the ways in which natural darkness was important for human and ecological health. We also showed people how simple acts such as adding shields to outdoor lights and turning off lights when you don’t need them can help preserve views of the stars.

Though I ended my tenure at the park in 2017, the night sky programs are still going strong and draw more visitors every season.

“The Urban Night Sky Place designation and the night sky programs expand visitors’ experience of darkness at the monument,” said Cami McKinney, chief of resource management and interpretation — and my former supervisor. “Timpanogos Cave is a park you don’t have to plan a vacation to visit,” she added. “As a result, we have regulars at our programs … The park is part of the community.”

Many people fear the dark and are often surprised to learn that darkness is an important and diminishing resource. Being part of Timpanogos Cave’s community and bringing together a group of people who value the benefits of deeper darkness and understand their power to protect it has been a wonderful experience — and I’m glad to see this beloved park recognized with this well-deserved honor.