Labor Day Has Its Roots in Chicago's Historic Pullman Neighborhood

The stories of Pullman are American stories. They are stories of hard work, immigration, race and class, wealth and poverty, and a struggle for justice.

UPDATE: On February 19, 2015, President Obama declared the historic Pullman neighborhood a national monument. This long-awaited event is the result of years of work by NPCA and so many people that care about this place’s significant contributions to our shared history, from the U.S. labor movement to Civil Rights.

With the Labor Day holiday approaching, have you ever wondered why it exists?

Long before the backyard family get-togethers and the relaxing day off from work, workers across America toiled in factories, rail yards, mines, and mills, some with working conditions unimaginable today. In Chicago, life in the city’s industrial district known as Pullman Town exemplified the need to recognize the incredible contributions of labor in America. 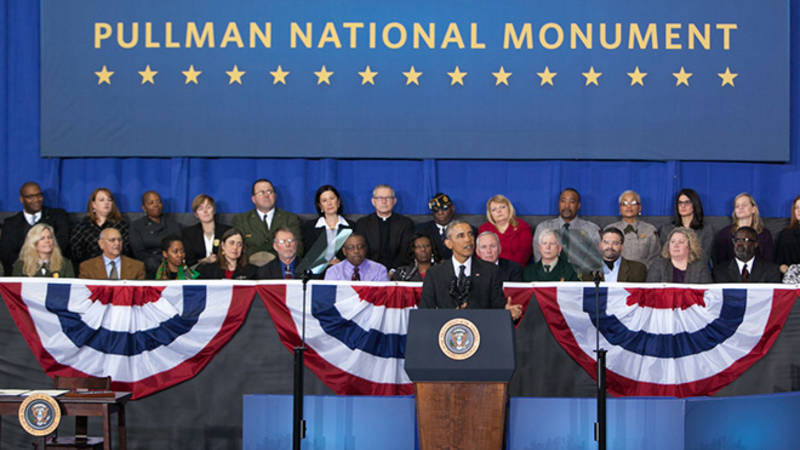 FAQ: New National Monument at Pullman Shines a Spotlight on Community Spirit and Our Shared Heritage

Earlier today, President Obama stood in front of hundreds of community advocates in Chicago and declared Pullman a national monument. This long-awaited event is the result of years of work…

Labor Day has its roots right here in Chicago. It started with George M. Pullman, an American industrialist who founded the Pullman Palace Car Company in 1867 to manufacture luxury passenger railcars. In 1880, Pullman developed the Town of Pullman in what is now the city of Chicago to provide a place where his employees could work and live productive and healthy lives. Pullman Town, as it came to be known, was America’s first planned industrial town and represented a dramatic departure from the overcrowded, makeshift, and unsanitary living conditions often found in 19th century working-class neighborhoods.

The rest, as it goes, is history. Responding to an economic decline that began in 1893, George Pullman cut wages without reducing rent, and his employees launched the now-famous “Pullman Strike” that spread across the railroad industry, interrupting national rail and mail service and causing a nationwide dialogue on workers’ rights and conditions. In 1894, the same year as the Pullman Strike, Congress unanimously passed a national Labor Day.

That history is still alive today with a movement to create Chicago’s first national park in the Pullman Historic District, further heightening the important stories of labor–including one of the country’s first African-American unions. The stories of Pullman are American stories. They are stories of hard work, immigration, race and class, wealth and poverty, and a struggle for justice.

The National Park Service is said to be the nation’s best storyteller. Envision park rangers giving tours of Pullman and inspiring the imagination of schoolchildren and visitors alike to recreate in their minds the hustle and bustle of 19th century industry. Few sites preserve the history of American industry, labor, and urban planning as well as Pullman. This story of our shared heritage is of national significance and makes Pullman worthy of becoming America’s next great national park.

We in Illinois are fortunate to have such a national treasure in our own backyard. We will be more fortunate when Congress passes legislation granting national park status to this living and breathing story of American history. Let us celebrate Labor Day this year by calling on Congress to establish Pullman as Chicago’s first national park.