It was hands-down the most impressive lightning storm I have ever seen.

Last month, I was driving out of Arches National Park at night with my young boys, Vann, age 7, and Billy, age 6. Every few seconds, a magnificent strike of lightning lit up the darkened sky, exposing the towering sandstone formations of this unique, inspiring landscape–including Balanced Rock, Courthouse Towers, and Park Avenue. We could even see the outline of the La Sal Mountains standing tall in the distance. Between those strikes, I noticed what looked like patches of fire on the horizon to the west. At first, I thought the lightning had started a wildfire. However, I quickly realized that it was flaring from the oil and gas wells dotting the landscape out toward Canyonlands National Park and beyond.

Sadly, the dramatic sight of fracking wells flickering against the night sky is no longer a surprise to me—not even this close to federally protected lands like Arches. It was a stark reminder of why I was here in this part of the desert, to help raise awareness about threats like these.

I had brought my two boys down to Moab, Utah, to meet Hispanic Access Foundation Director Maite Arce and her family on their 950-mile “Four Stops, One Destination” national park tour. We had spent the previous four hours traipsing through arches, scrambling over red sandstone rock formations, learning about the unique cryptobiotic soil crusts of the desert, eating fried chicken and watermelon, and watching a strikingly tame deer drink from a water puddle. Maite, her husband, Ted, her teenage sons, Noah and Luke, and their friend, Jonathan, started at Dinosaur National Monument and later continued to Mesa Verde National Park in Colorado and Chaco Culture National Historical Park in northwestern New Mexico. The family completed the whirlwind driving extravaganza in just ten days.

Though I was excited to meet Maite and her crew, the outing wasn’t all fun and games. The “Four Stops, One Destination” tour was designed to engage Latinos with national parks, as well as to highlight the importance of protecting these iconic places from the negative impacts of oil and gas development—two huge priorities for NPCA as well. According to Maite, only 9 percent of the country’s nearly 54 million Latinos visit national parks; through her tour, she hoped to introduce and involve a diverse group of people in actively safeguarding the future of these parks, starting with her own family.

It’s a mission I can relate to. Over the past year, I have advocated against irresponsible energy development on Bureau of Land Management (BLM) lands adjacent to Dinosaur National Monument and Chaco Culture National Historical Park. The BLM has also been working proactively with the National Park Service in Moab to determine where this kind of energy development is or is not appropriate near Arches and Canyonlands National Parks, but the agencies have yet to release the final leasing plans that could have wide-ranging impacts on these parks and their air, water, wildlife, and night skies. 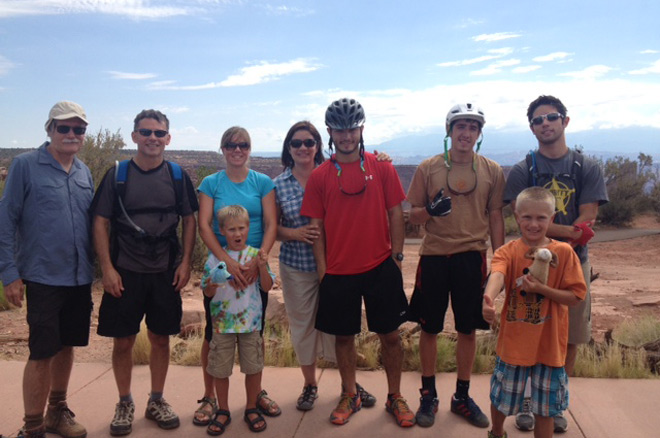 Group pose of Maite and her family with the Pollard family. Photo courtesy of Erika Pollard/NPCA.

“We’re looking to put conservation on equal ground with oil and gas drilling,” said Maite. “If we don’t have a balanced approach to energy development, future generations will not be able to enjoy the beauty of these parks as they stand today. And it will be that much more difficult to attract Latinos, and other communities for that matter, to these parks.”

After the trip, Maite told me that it had a big impact on her boys, who are still spreading the word about what they saw and learned. They were struck by the number of trucks on the roads, the drills on the roadsides, the warning signs of oil and gas activities, the gas flaring, and the sheer proximity of energy development to the parks. However, they were also struck by the history, the human experience, the silence, the smells, and the vastness of the landscapes in and around our national parks in the Southwest. Those incredible views and superb cultural and natural resources are what inspire me to advocate for the parks. I am also inspired by the teenage boys who found their voice over the course of a ten-day road trip and who want to share their experience and encourage others to explore and advocate for these special places, too. 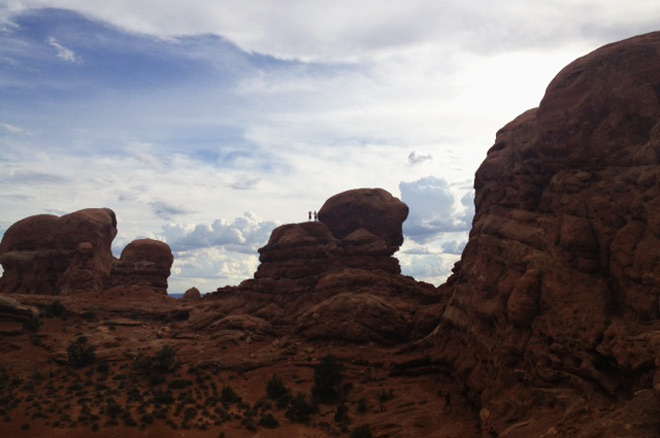 The boys enjoy scrambling over the rocks at Arches National Park. Photo courtesy of Erika Pollard/NPCA.

Although my own boys were ready to fall asleep on the late-night drive out of Arches after chasing the older boys around on the rocks for hours, the thunder and lightning would not allow for it. It gave us all some quiet time to reflect in the car on our adventures—and what more oil and gas development would mean for our parks. When my boys come back to Arches or Chaco in 15 years, I don’t want the incredible night skies to be taken over by flaring and drilling activities. I don’t want the landscape to be dominated by the sight and sound of haul trucks and machinery, polluted air and water, and impaired ecosystems. I want them—and all visitors—to continue to experience the silence, the smells, the vastness, and even a good lightning storm once in a while.