In national parks around the country, camera traps capture images that astonish, delight, inform, reveal — and have the power to change human behavior.

Bears like baths. It turns out they don’t just go to pools to drink, splash and frolic — they also slip into the water to scrub their faces and ears and rinse themselves clean. In this photo, shot in the backcountry of Yellowstone National Park, a mother grizzly shows her cubs proper hygiene in a so-called bear bathtub.

Wildlife photographers, no matter how discreet and experienced, could never get close enough to capture this quiet family moment. But camera traps can. Outfitted with infrared sensors, these cameras snap images and video whenever something moves in front of them. The equipment is relatively cheap and easy to use, and unlike humans, cameras don’t get tired and never have to come in from the cold, heat or rain. They can stay out in the field, untouched, for months, until a magical moment unfolds before them.

The photos are amazing to see, but the images offer far more than aesthetic pleasures: They’re frequently used by scientists, public policy experts and law enforcement officers. The bear bathtub camera trap, for example, provided new insights into bear behavior. Other camera traps have been used to fight poaching, prove the existence of elusive and rare creatures, and determine whether animals are healthy. Jaw-dropping photos such as a widely circulated shot of a mountain lion below the Hollywood sign in Los Angeles can raise awareness and sway public opinion, especially in the age of social media.

While camera traps can be used almost anywhere, the protected wildlife and landscapes of national parks provide one-of-a-kind subjects and backdrops. In turn, the parks, their visitors and the animals that live in these places reap the benefits of this powerful tool.

First things first: You can’t just waltz into a national park and set up a camera trap. To protect the land and wildlife, special permits and permissions are an absolute must-have. Photographer Michael Durham worked closely with the National Park Service when he was photographing insects at Big Hole National Battlefield in Montana. “I had a permit to run a UV light at night — and this brought in many insects,” he said. “Any that flew within range of the camera automatically got its photograph taken.” In John Day Fossil Beds National Monument in Oregon, Durham helped a Park Service biologist document pinion mice, which they discovered venture further north than previously known. In the process, Durham captured this action shot of a deer mouse. And in Craters of the Moon National Monument & Preserve in Idaho, Durham’s photos helped scientists catalog the species using one of the park’s caves. The images are now part of an educational video for visitors about the nearly invisible creatures that roam the park at night.

It’s like looking at a ghost. The Sierra Nevada red fox was prized by trappers for its thick, soft fur until California finally banned trapping in 1974. By that time, the fox hadn’t been seen in Yosemite National Park for decades; everyone figured it had been wiped out there. Then one snowy day, a motion-sensor camera brought it jauntily back to life.

The one thing you can’t control when you’re camera trapping is the thing you need the most: luck. Photographer Charlie Hamilton James did everything he could to control the results he got. And then the elk did this. Bad luck, right?

Or is it? Sure, the top half of the elk is out of frame. But that gives you a sense of how close this 700-pound animal got to the strange contraption in a remote corner of Grand Teton National Park. In the background, another elk just chills. There’s not another creature in sight all the way to the snow-capped peaks on the horizon.

It’s an ordinary moment in the lives of two fellow mammals as they go about their day, and yet it’s hard to take your eyes off the page. That’s a pretty lucky shot.

If these look like some of your own selfies (particularly the accidental kind), that’s because camera trap photos are essentially wildlife selfies. That’s especially helpful with animals that are dangerous or, like these two, people-shy. 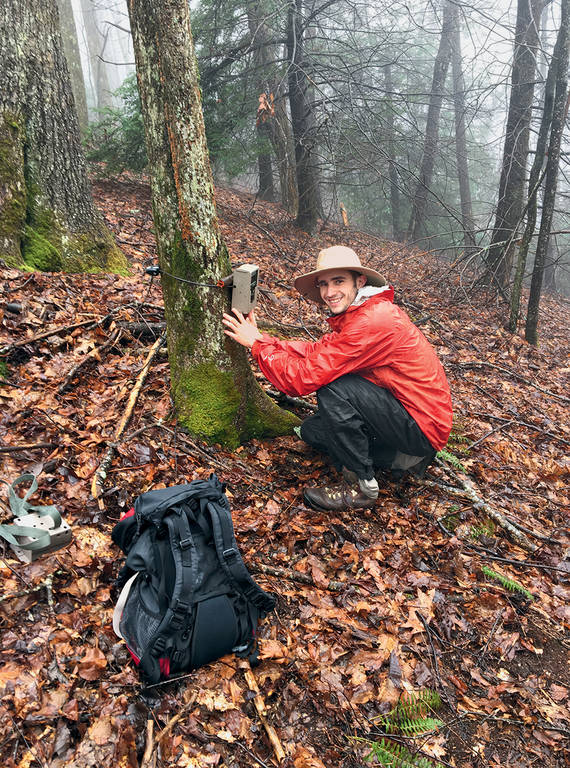 In Great Smoky Mountains National Park, which straddles Tennessee and North Carolina, a young bull elk’s handsome backside was preserved for posterity. The bobcat’s peek-a-boo mugshot was snapped just outside the park in Pisgah National Forest.

NPCA staff in partnership with Wildlands Network are using these camera traps to help reduce collisions between animals and cars on Interstate 40. These high-speed encounters always end badly for the animals, and often injure humans, too.

Camera traps have helped confirm where the animals travel and the different approaches they take when trying to cross the highway. Armed with that data, NPCA Senior Program Manager Jeff Hunter is leading a coalition of federal and state agencies and tribal and nongovernmental organizations to improve the effectiveness of existing wildlife crossings and examine whether new structures are needed, such as overpasses or underpasses designed for animals.

“To have all these different agencies coming together in good faith, sitting around the table agreeing to work cooperatively, is very heartening,” Hunter said. “The beneficiaries are the wildlife and the people who drive this road every day.”

When a bison met its end near a road in Wyoming’s Grand Teton National Park, it was bound to attract scavengers, predators and tourists — a potentially dangerous combination. So workers moved the carcass to a remote location, where it became the perfect bait for a camera trap.

Photographer Charlie Hamilton James, who was in the park on assignment for National Geographic, seized the opportunity. His mission: Get as close as possible to the wild animals of the Tetons, while keeping the remarkable landscape in the frame.

All day long and into the night, the camera trap he set up near the bison carcass captured images like this one of a grizzly bear feeding while fending off ravens. Scavenger by scavenger, photo by photo, the carcass gradually disappeared.

The artificial lines that humans draw between parks and the surrounding lands don’t mean a thing to bison, elk and pronghorn herds. As the seasons change, they migrate as they always have, moving in and out of parks in search of food. Camera traps make it possible to witness this spectacle of nature. Here, a herd crosses the Lamar River in Yellowstone’s rugged backcountry.

NPCA’s Jeff Hunter was thinking about kids, cameras and the thrill of discovery when he teamed up with the Park Service and Metro Nashville Public Schools this year. Their goal: to use camera traps to introduce students to parks and public lands careers.

Many of the young people had never been to a national park site until this project took them to Tennessee’s Stones River National Battlefield. The eighth graders helped deploy camera traps and later returned to swap out the cameras’ memory cards. That’s when they got their first look at the data they were gathering, such as this cool shot of a coyote.

“Our students have been engaged with real science with real scientists gathering real data,” says Jennifer Berry, Nashville schools’ STEAM director. “This is the kind of learning a classroom does not provide. To see their expressions when they review the wildlife cameras is life-changing.”

It took a prop plane, a four-wheeler and lot of hiking for Ingo Arndt to get within sight of coastal brown bears on the tidal flats of Lake Clark National Park in Alaska. For months, he photographed them from a safe distance using a telephoto lens. His close-ups were fascinating, but the context was missing.

“It was important to show the bear in his habitat,” Arndt said. “Not many people expect a brown bear on the ocean coast.”

The problem was that if he zoomed out to show the landscape, the bears became very tiny. To capture the animals in their unusual environment, he needed to get next to them with a wide-angle lens. “Of course it was not possible to go this close to the bear with the camera in my hand,” Arndt said. “That was the moment when I started to think about a remote camera car.” He turned a toy car into a tiny vehicle for his camera, which he maneuvered from afar.

Voila! The result is a mesmerizing face-to-face encounter with the bear and his world. And no one was hurt in the process.

Camera traps tell a story with a happy ending in the Greater Yellowstone Ecosystem, where fencing that often has five or six strands of barbed wire is a problem for pronghorn antelope.

If the bottom wire is too close to the ground, they can’t squeeze under. And though the animals can run as fast as 60 miles an hour, they are not very good at jumping over fences. If they try to get over or under anyway, they can get injured or tangled up. Going the long way around uses precious energy during lengthy migrations.

NPCA staff, along with local landowners and hundreds of volunteers, are working to solve the problem by reducing the number of wires and installing smooth (rather than barbed) wires on the bottom that allow pronghorn to pass through but prevent cattle from leaving their pastures. Staff set up camera traps to see where barriers are interfering with pronghorn migration and to determine if the modified fences work. The proof is in the picture.