Imagine boating to paradise and then—without meaning to—causing it harm. Thanks to more than a decade of work in the Virgin Islands, a national park visit by boat is now gentler on the marine environment.

The spectacular coastal scenery, crystal clear waters, reliable winds, and beautiful bays of Virgin Islands National Park and the Virgin Islands Coral Reef National Monument have made them popular destinations for boaters. In the past, these visitors had to use anchors to secure their vessels, causing considerable, albeit unintentional, damage to sea grass beds, coral reefs, and other  benthic (seabed or seafloor) resources. To combat this problem, the park embarked on a mooring program to provide a safe and reliable alternative to anchoring with the long-term goal of creating an anchorless park.

Moorings are permanent installations that allow boats to stay in one place without using anchors. In our case we drive heavy-duty augur-like devices about 15 feet into the seabed and then connect a line to a buoy on the surface (see a diagram of how this works). Boats attach to the buoy and are secure. Anchors are a more temporary solution, disturbing the seabed every time they are dropped and then retrieved. Just imagine the damage that could be done by 50 boats dropping anchors and then pulling them up day after day. 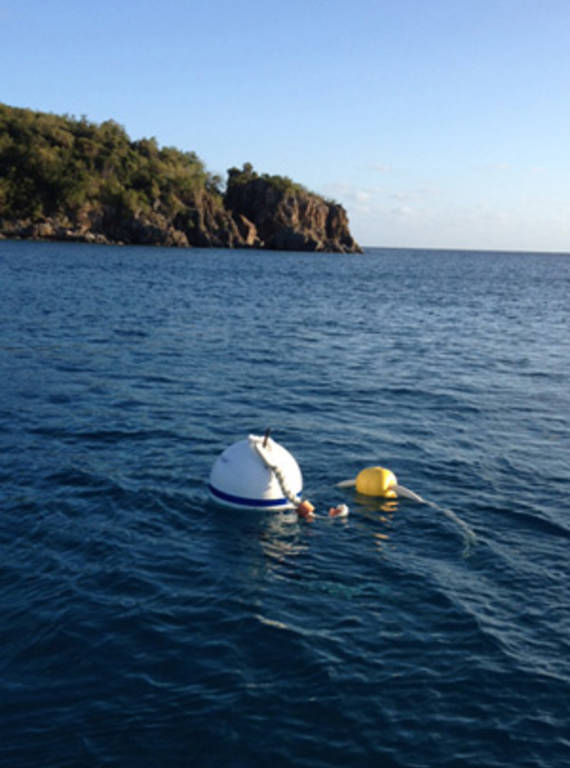 The moorings float on the surface of the water.

Photo courtesy of the Friends of Virgin Islands National Park.

Park leadership and the Friends of Virgin Islands National Park finally achieved our long-held goal of an anchorless park in February 2013. Since the beginning of the program, the Friends group has installed 340 moorings and invested more than $663,000 in this program.

Starting back in 1999, the Friends installed 180 moorings for overnight use in ten bays around St. John. These white mooring balls along the north and south shores of St. John have played a significant role in protecting coral reefs, allowing the recovery of sea grass and protecting other benthic resources. The sea grass beds had been seriously depleted due to anchoring, but now if you snorkel in the mooring fields you will see a rich carpet of sea grass–much to the delight (and survival) of the myriad of marine creatures that make the sea grass their home.

In 2004, the Friends embarked on a program to install moorings in the recently designated Coral Reef National Monument. As a marine protected area, anchoring was prohibited within the monument. But, while we supported the conservation policies of the monument, we felt that the prohibition on anchoring precluded many of the traditional uses of the monument’s waters.  Installing moorings was the perfect answer and a “win-win” for both the users and the environment: allowing users to continue to enjoy this unique marine environment while providing needed protection to the natural resources. In this case, the Friends installed two dive moorings at popular dive sites in the monument, six moorings for blue runner fishing, and 125 storm-mooring berths and 11 day-use moorings in Hurricane Hole, a traditional refuge here for vessels during tropical storms. These moorings were installed in four phases between 2004 and 2008.

All of the moorings mentioned above were for boats up to a maximum of 60 feet in length. Vessels larger than that still had to anchor. Earlier this year, we installed 14 moorings for boats between 60 and 100 feet in six bays, finally making the park anchorless.

The protection of the park’s marine resources was obviously the principal objective of the mooring installations. However, the moorings also have a significant impact on the visiting boaters’ experience by providing a safe and convenient means of securing their boats while enjoying Virgin Islands National Park and the Coral Reef National Monument.