This Saturday, April 20, marks the third anniversary of the oil rig explosion that devastated coastal communities, waters, and lands in the Gulf of Mexico and imposed tragic loss among 11 families.

Nearly three years ago, I flew over the Gulf of Mexico in a small plane, to see firsthand the devastating impacts the 2010 Deepwater Horizon BP oil spill was inflicting on our national parks and the local communities, especially Gulf Islands National Seashore. I met with many workers and toured the National Park Service’s Oil Spill Command Center to discuss clean-up efforts, staff capacity, and the challenges they faced trying to protect park resources and wildlife. 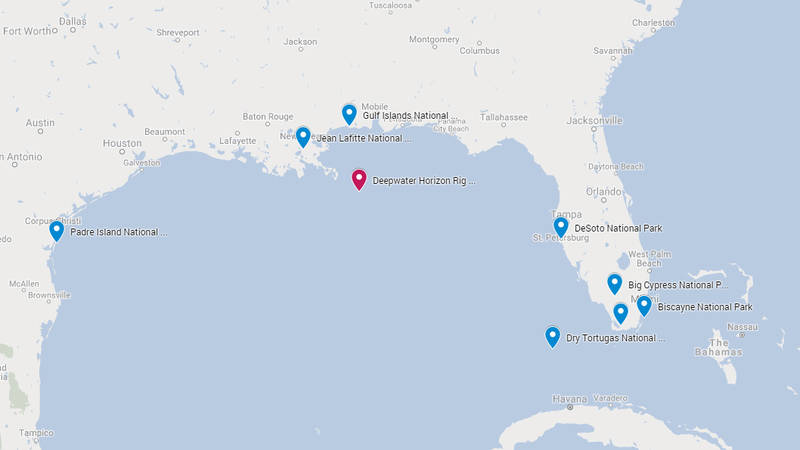 See the national parks that were affected by the Deepwater Horizon oil spill.

As I walked along the beach of Gulf Islands National Seashore, the wind and rain from Tropical Storm Bonnie was strong. The brown-stained sea foam rolled in and out, leaving behind a thin sheen of oil on the beach. Though officials advised against it, I reached down to pick up some of the brown sand and felt the oil between my fingertips. I was not prepared for the stinging sensation on my fingers—a slight and persistent chemical sting. It was heartbreaking to imagine the oil spreading over the Gulf Islands’ beaches, into its wetlands, and onto its wildlife. The work ahead for the National Park Service was daunting, especially for the more than 600 staff from 120 national parks deployed to assist in the Gulf Coast cleanup efforts, in addition to thousands of others from federal agencies, national and local organizations, and nearby communities.

Recognizing that one of the worst environmental disasters to hit the Gulf Coast in U.S. history could bring about an unprecedented opportunity for recovery and restoration, Congress passed the Resources and Ecosystem Sustainability, Tourism, Opportunities Revived Economies of the Gulf Coast States Act (also referred to as the RESTORE Act) last year. This bipartisan legislation ensures that 80 percent of the Clean Water Act penalty payments stemming from the BP oil spill would be directed toward environmental restoration and economic development in the Gulf region, including national parks like Gulf Islands National Seashore, Jean Lafitte National Historical Park, and Padre Island National Seashore, where the health of the Gulf is directly linked to the health of the parks.

Today, BP and other responsible parties are on trial in a federal court in Louisiana to determine the extent of their negligence and the financial penalties that will be levied. In the meantime, there are many projects that could make a tremendous impact on the Gulf through the RESTORE Act.

The entire Gulf is one large ecosystem. Improving the health of places like Florida Bay, the Mississippi Delta, and Galveston Bay will support vibrant fisheries, wildlife habitat, and livelihoods that depend on a healthy Gulf. NPCA supports a variety of restoration projects with a goal of improving the overall health of the Gulf to allow it to be more resilient to future disasters.

At Gulf Islands National Seashore, one potential project would remove asphalt and road-base debris from areas that were once pristine sugar-white sand, but have been damaged by years of storm events. At Jean Lafitte National Historic Park and Preserve, a proposed project would restore wetlands damaged by old oil exploration and drilling canals, levees, and platforms in the Barrataria Preserve portion of the park. At Everglades National Park, another proposed project would bridge spans of a major access road known as the Tamiami Trail, allowing water to flow back into the park and out to Florida Bay, a highly productive Gulf estuary that has experienced a decline in fisheries and wading birds due to the lack of fresh water.

With five of America’s Great Waters and eight national parks located in the Gulf Coast region, we must not forget how these cherished places suffered, either by direct impacts from the oil or indirect effects such as lost revenues from spring and summer tourism seasons. These communities have been waiting for funds to begin critical shovel-ready environmental restoration projects that will rebuild the Gulf Coast, making it stronger and more resilient.

We must not forget how we felt when we heard the news three years ago and watched damage spread day after day. The communities, businesses and national parks in the Gulf Coast still need help to recover from it. The federal government must hold the responsible parties accountable and use the financial penalties to jumpstart these restoration projects that, once funded, will help to restore and rebuild the Gulf Coast to make it stronger than ever.