It’s a feverish midsummer night in southwestern Arizona, and the air feels electric because something unusual is about to happen. It’s about to rain.

Some parts of Organ Pipe Cactus National Monument receive just a few inches of rain each summer, so when a thunderstorm builds over the Ajo Mountains, the desert holds its breath. For Atta mexicana, a tropical leafcutter ant that lives here at the northernmost limit of its range, the rain means it’s almost time to mate.

Few people ever see a mating swarm, which happens before sunrise the morning after a summer rain. But Alex Mintzer has filmed one while lying on a bench dusted with baby powder to ward off the colony’s soldier ants, whose bite can draw blood. Forgoing sleep to film ants comes naturally to Mintzer, an entomologist who spent his childhood inspecting invasive Argentine ants in the Los Angeles dirt.

By the 1970s, Mintzer was an undergraduate biology major and “already one of those confirmed ant freaks.” That’s when he saw his first Atta mexicana leafcutters in Sonora, Mexico. He still gets a little gushy remembering it.

“What impressed me most was the scale of their operations,” he said. “It’s like if you were visiting the Roman Empire and you’d seen their outposts and forts and then you went to Rome itself. You say, ‘OMG.’ It was an OMG moment.”

An entomologist first identified these leafcutter ants at Organ Pipe in 1949, and park staff found two colonies in the 1970s. Mintzer made his first visit to the park in 1980 and soon started studying the ants’ foraging behavior and fungus cultivation. He also made clear to park staff that these insects were special. “This isn’t any run-of-the-mill small brown ant,” Mintzer explained. “These were big ants, in big colonies, with charismatic behaviors. They knew visitors would be interested.”

Rangers at Organ Pipe have used Mintzer’s research in their interpretive “ant walks” to teach visitors about the species since 1987. Rijk Morawe, chief of resources management for the park, credits Mintzer for bringing the ants to light.

“The guy is just in love with them,” Morawe said. “It’s infectious. It’s a joy to see somebody appreciate the perfection of a single species.” 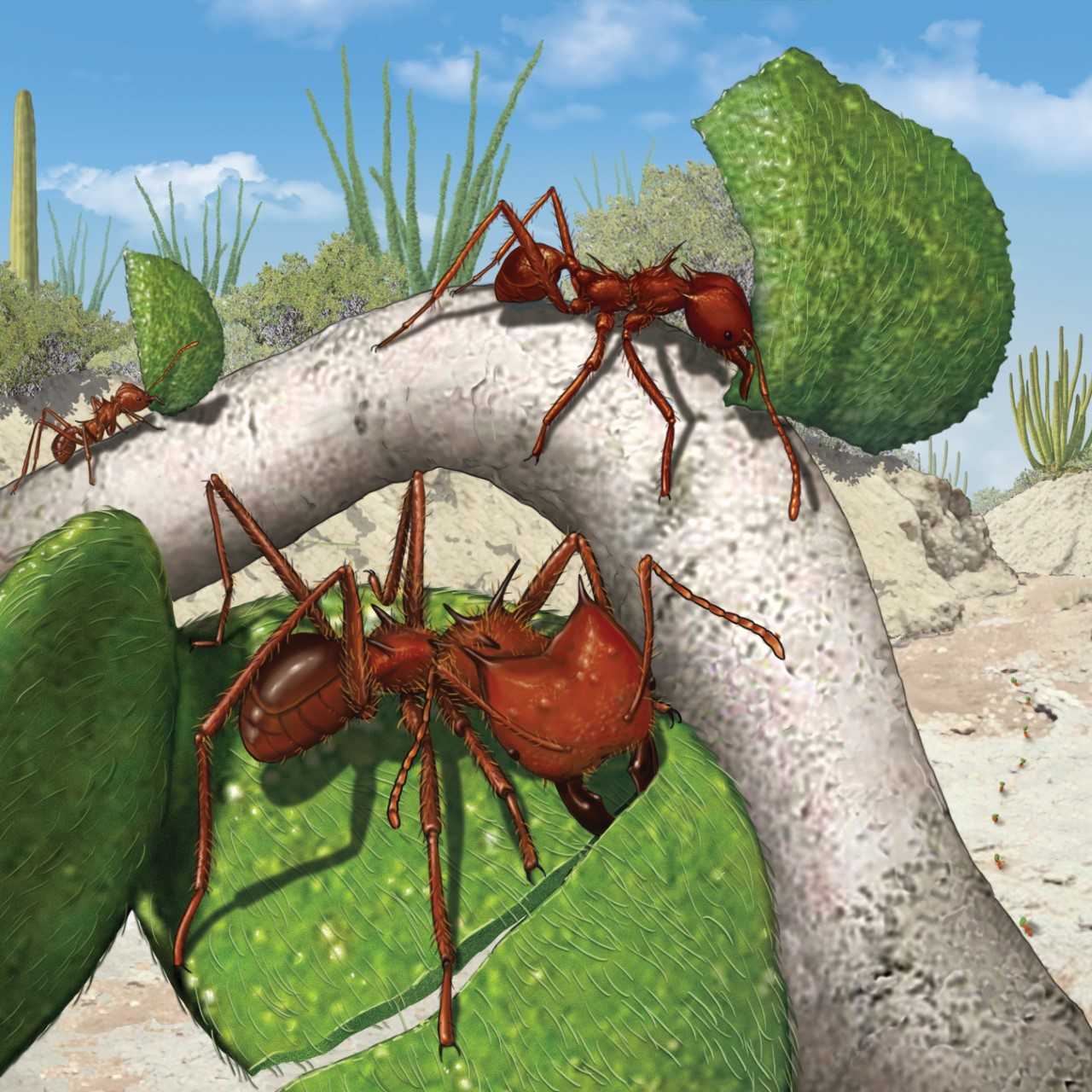 Atta mexicana is most prevalent in dense tropical forests from Mexico to El Salvador. The queens, which measure an inch long, are the largest ants in North America. After mating, a queen attempts to start a new colony. She chews off her wings and bores a 30-inch shaft into the rain-softened soil. In a chamber at the bottom, she lays her eggs and regurgitates a piece of fungus from her birth colony. She tends the fungus like a gardener, fertilizing it with her feces. Her eggs hatch into the colony’s new workers. These ants venture out to collect stems, leaves and flowers to feed the fungus, which symbiotically feeds the larvae and the adults. In a mature colony, millions of ants will forage about 440 pounds of vegetation a year.

With its sun-beaten creosote flats and colorful basins of columnar cacti, elephant trees and desert lavender, Organ Pipe doesn’t look like prime habitat for a tropical insect. The fungus that these ants cultivate requires 100 percent humidity and temperatures between 75 and 84 degrees Fahrenheit — conditions that the ants create underground. “The desert is a hot, dry place, and the soil is rock-hard,” Mintzer said. “It’s really counterintuitive that these ants are doing so well there.”

Exactly how well these ants are doing has been the thrust of Mintzer’s research for 33 years. Mintzer organized his first census of Organ Pipe ant colonies in the winter of 1985 with his wife, Carole, and a handful of volunteers. The ants are most commonly found near arroyo wash channels with plentiful vegetation and fine soil. Mintzer scoured aerial photographs to identify 11 arroyos, which he and his team explored on foot. That first year, Mintzer counted 36 colonies. He repeated the survey in 1996, 2005 and 2015. Initially, Mintzer’s intent was to count and locate the colonies. Over time, these data identified cumulative changes in colony numbers and distribution. The censuses also showed that an individual colony’s lifespan, equal to the life of its queen, averages between 10 and 20 years.

In 2005, Mintzer counted just 25 colonies, his lowest recording. In 2015, he found the most — 83. He’s not sure what causes this volatility, but he has some ideas. The colony numbers most directly correlate with the summer rainfall that triggers mating swarms. “If there’s no rain, there’s no reproduction,” Mintzer said. This reliance on rain may imperil these ants as the climate shifts because long-term climate models for the area forecast more frequent and longer droughts. So far, the ants don’t seem to have been negatively affected by climate change, but an extended drought could render them locally extinct.

Mintzer also has identified cross-border activities that could harm the ant population. The park, which abuts Mexico, is the site of significant illegal immigration and smuggling. This accounts for foot traffic and some litter in the arroyos where the ants live, but this seems to have had minimal impact on the ants. The border fence, which extends 30 miles along the southern side of the park, likely does not impede the ants’ movements. (Most of the fence is designed to stop vehicles and features large gaps, and a 15-foot-high pedestrian barrier that runs along roughly 5 miles of the border includes mesh openings.) An increase in border patrol agents and all-terrain vehicles, though, has led to a degradation of the insects’ foraging grounds in places. “It could have an impact,” Mintzer said. “But I’m optimistic that whatever human foolishness happens at the border, the ants will be able to deal with it.”

Mintzer is retiring from 20 years of teaching undergraduate biology at Cypress College in California. He still makes annual pilgrimages to Organ Pipe, sometimes to study the ants and sometimes just to watch them work. “It’s like visiting your old high school,” he said. “I know the colonies, but even over a year, things change. I’ll keep doing this as long as I’m able-bodied.”